Naming ‘Luna Lake’ is a story of survival, loss 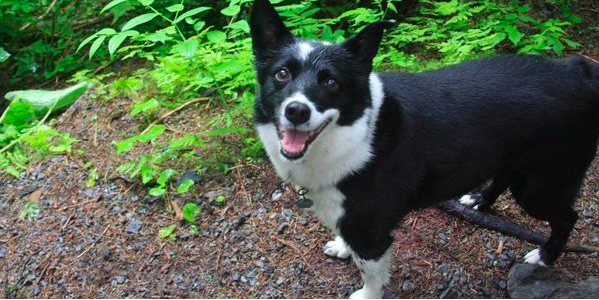 Luna, Kevin Knox’s border collie. Naming a geological feature after a pet is a bit of a longshot — unless the name is already in common use, which Knox believes it is. The Sitka Historic Preservation Commission has agreed to write a letter supporting Knox’s application. “The fact that the lake was created on the same day that the eponymous dog died is also significant,” said commission secretary James Poulson. (Kevin Knox photo)

The first casualty of modern landslide activity around Sitka was not one of the three men tragically lost in the devastating slides of 2015.

Rather, it was a ten-year old border collie named Luna, who died two years earlier when a massive slide wiped out a Forest Service cabin at the headwaters of Redoubt Lake.

Luna’s former owner now hopes to officially name the small lake created by slide in honor of his longtime friend, and there’s a chance he’ll succeed.

There’s no way to sugarcoat this: Kevin Knox is lucky to be alive. He and his then-girlfriend Maggie Gallin were camped in the Redoubt cabin in May of 2013 and had just come ashore from a morning’s fishing in the cabin skiff, when the mountain slope above the cabin gave way.

The couple — and Luna — fled down the beach, but the slide still caught them and pushed them under the surface of Redoubt Lake. 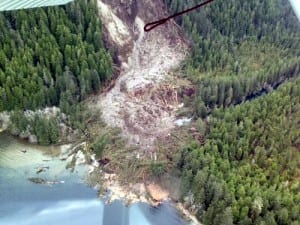 “The noise that the slide was making was incredible,” says Knox of the catastrophic rock failure in the slope above Redoubt cabin. Although made of boulders rather than mud, the dam that formed Luna Lake may eventually fail, according to Sitka District Ranger Perry Edwards. “The outflow has formed a small waterfall called a ‘head cut’,” he explains, “that could move upstream.” This photo was taken by Knox the day after the slide when he first returned to search for Luna. (Kevin Knox photo)

“The noise that the slide was making was incredible,” Knox said. “You could feel the ground moving underneath you and everything. And for Maggie and I to come out of the water underneath all these trees and to make our way to shore, we thought for sure that Luna would be there somewhere.”

Unlike other more recent slides in Sitka — which have behaved like rivers of mud — the Redoubt slide was a catastrophic rock failure. That Knox and Gallin made it out is hard to believe. The odds, says Knox, would have favored Luna.

“In so many ways it’s hard to fathom why she wouldn’t have escaped it,” Knox said, “because literally as we’re running down the beach trying to get away from the slide coming down, she was jumping up and nipping at my sleeve. It’s kind of a game that we sometimes would play. She would run by your side and leap up and kind of grab your sleeve a little bit — just kind of telling you that she’s there, that she’s keeping up, and you’re not really all that fast or whatever.”

Knox and Gallin were rescued by a floatplane pilot, who flew them back the next day to search for Luna. Over the course of about a month, Knox says he returned to Redoubt to comb the shoreline for Luna, sometimes with the help of the Forest Service fish techs who worked at the salmon weir — who had already begun to refer to the 1-acre lake that had formed above the slide as “Luna Lake.”

That may be the single-most important factor in whether “Luna Lake” ever makes it on a map.

“The community, the people who use and visit the area, recognize and use the name that’s being proposed,” said Joan Antonson, Alaska’s state historian. Antonson is the program manager for place name petitions headed to the Alaska Historical Commission.

Antonson says losing a loved one — human or pet — or even a significant achievement, is not enough to win a place name.

“There were these unfortunate accidents, like a plane crash where someone was killed — or first ascents of a mountain — and they are not reason enough to put a name on a place,” Antonson said.

Kevin Knox is circulating a petition to demonstrate that “Luna Lake” has support among Sitkans. One of 98 signers so far, Joe S., wrote, “I worked out at the fish weir for years and around the time the landslide happened. I was the first one on the scene after Kevin and Maggie had been picked up and i searched for Luna and land and all throughout the slide. I also found the destroyed cabin and was able to get a lot of gear back to them. Such a incredible thing to have happen. Lake Luna is a beautiful name and will be forever a reminder of what happened there.”

Antonson refers to Luna Lake as a “commemorative application,” which can’t even begin until five years after the subject you’re commemorating has died. She says this discourages people who are applying as an emotional response. And then the application process itself can take a year, as documents move from local government, to the state historical commission, and finally to the US Board on Geographic Names — which can overrule state recommendations. That also discourages applicants. 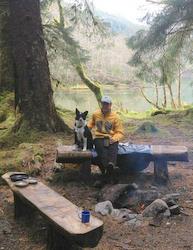 Kevin Knox with Luna and Redoubt cabin, prior to the slide. “Maggie and I do not feel entitled to name this new geological feature,” Knox says, “but it’s a part of our healing.” He’s seeking the permission and support of Sitka Tlingit to pursue the naming application. (Maggie Gallin photo)

Knox is not discouraged. Luna saw him through the sudden death of his father in 2005 and loss of his first wife to cancer in 2009. In the five years since surviving the slide, he and Maggie have married and had a child. There is a missing piece in this miracle and her name is Luna. That a small lake was created on the day she died seems a natural legacy.

“Naming after Luna was just a piece of a puzzle, I guess,” Knox said, “for Maggie and I, and a part of our healing.”

Knox has reached out to the Tlingit community in Sitka, to discuss the idea, and to avoid imposing a name on a geographic feature inappropriately. He’s open to the possibility of calling it Gaat Luna Lake, to recognize the cultural importance of the sockeye salmon — or gaat — that spawn there. There’s also the possibility that Luna Lake might not be permanent, as the outflow stream erodes the dam created by the slide. Knox is fine with that. “No geographic feature is permanent in the end,” he says.

The Alaska Historical Commission will meet to consider Knox’s proposal in mid-January.