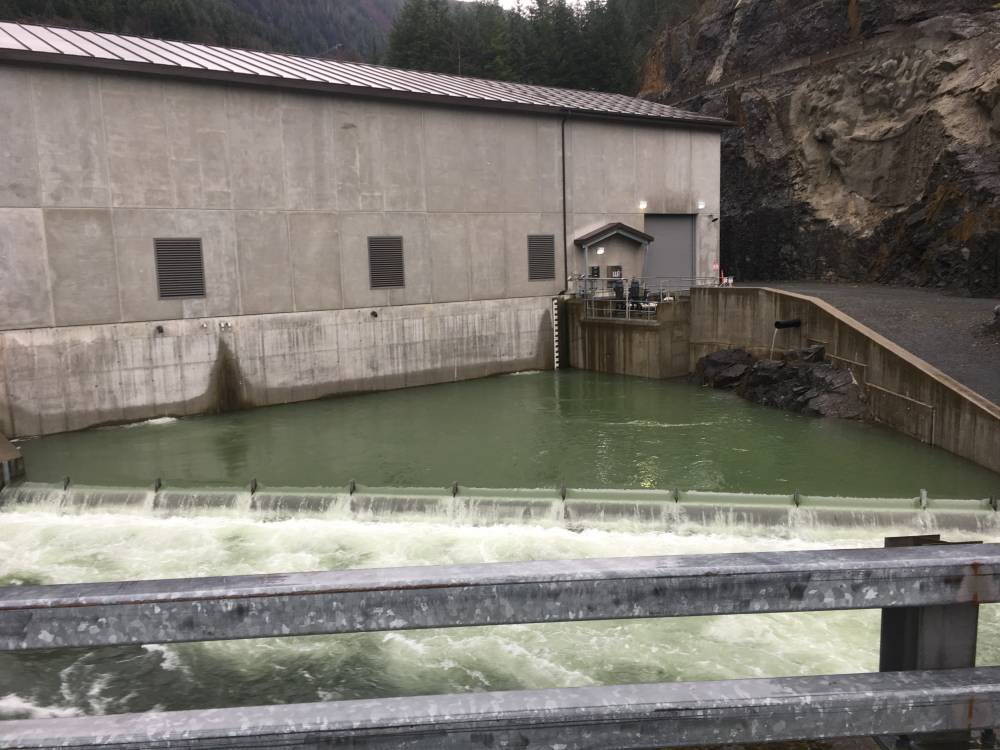 The City of Sitka shut off water supplied from Blue Lake after registering high turbidity levels early Sunday morning, shown above in the hydro electric afterbay. Environmental Superintendent Shilo Williams said the green water is a sign of glacial silt introduced to the water by heavy rains this weekend. (Photo courtesy of Shilo Williams)

The City of Sitka used a different water source on Sunday due to high levels of turbidity at Blue Lake. They supplied water to Sitkans through back-up storage tanks. By Sunday night, turbidity levels had dropped to an acceptable level and the flow from Blue Lake was restored.

But what exactly is turbidity?

“Basically the cloudiness of water,” Shilo Williams, the environmental superintendent for the City and Borough of Sitka, said. “The cloudier the water, the higher the turbidity is going to be.”

Turbidity is caused by tiny particles that are suspended in water, Williams said. She added turbidity is just one of the many things the public works department monitors to ensure Sitka’s drinking water is up to federal standards.

“We have a computer program that is tracking data all the time,” Williams said. “we know what the turbidity is coming into our system all the time. We know basically everything that we need to know at all times.”

The reason for the high regulation? Blue Lake is one of 10 bodies of water in Alaska that does not have to be filtered. The federal Environmental Protection Agency granted the City of Sitka a filtration waiver because of the lake’s purity.

Instead of being filtered, the water is disinfected using ultraviolet radiation that inactivates most pathogens. In other words, water drawn from the lake is blasted with light to kill waterborne bacteria and viruses.

Turbidity is measured with what’s called a nephelometer. The device shines a beam of light into the water and measures the amount of light that bounces into a detector set to one side. The amount of light that’s detected is directly correlated to the density of particles within the water. The EPA requires that turbidity in water from Blue Lake be less than 5 NTUs or Nephelometric Turbidity Units. 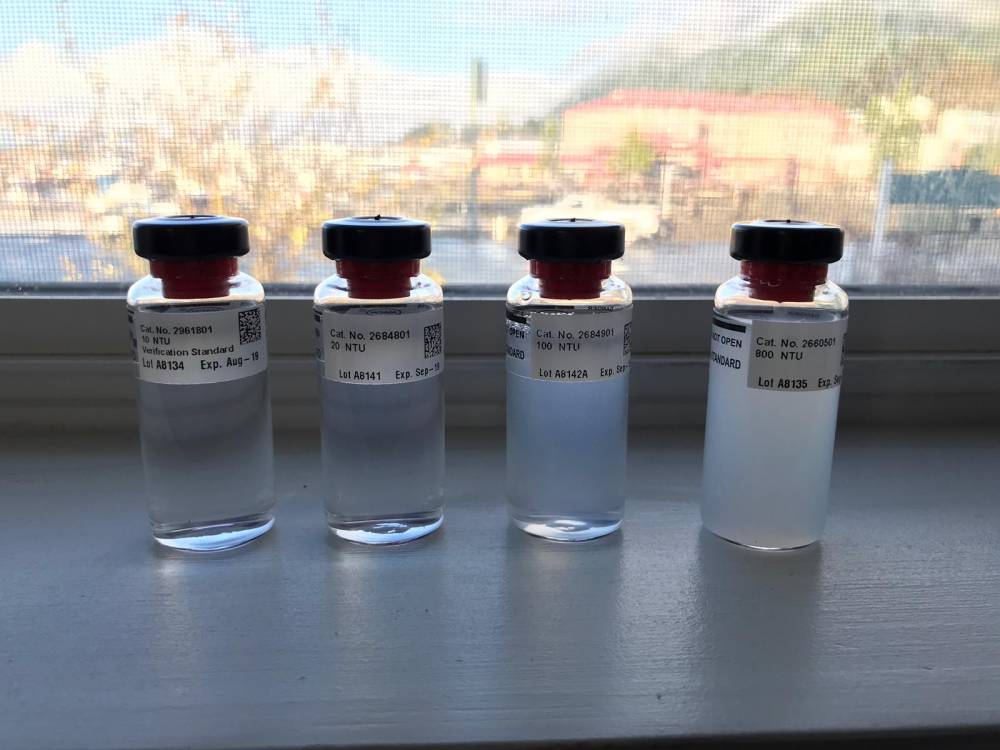 These samples of water are used to calibrate the nephelometer that monitors the level of turbidity in water drawn from Blue Lake. The EPA requires that turbidity in water from Blue Lake be less than 5 NTUs or Nephelometric Turbidity Units. Shown above from left to right are samples of water with 10, 20, 100 and 800 NTUs. (Photo by Enrique Pérez de la Rosa)

The cloudiness at that level is imperceptible to the the human eye. Water at 5, 10 or even 20 NTUs can look just like water that has no particles at all. But if the level of turbidity is too high, pathogens attached to particles in the water can bypass ultraviolet treatment and contaminate Sitka’s water supply, Williams said.

“If we have high turbidity there’s a good chance that our disinfection won’t be achieved and that can cause gastro illnesses, diarrhea and stuff like that,” she said. “It’s really important to keep that turbidity low.”

If the level of turbidity exceeds federal standards, the filtration waiver could be rescinded. High turbidity events cannot occur more than five times within a 10-year span or more than twice within one year. According to Williams, the last high turbidity event in Blue Lake occurred on October of 2017. This is the fourth such event in four years.

So, what changed since 1983, when the City of Sitka started drawing water from Blue Lake? Williams points to the expansion of the Blue Lake Dam in 2014, which has caused the level of the lake to rise and fall and bring glacial silt from the lake’s surroundings into the water.

“And I think that is getting disturbed with the new lake levels,” she said. “And of course, when you have a lot of rain, that brings more glacial silt into the lake itself and making its way to our intake.”

The system is designed to shut off the Blue Lake intake when water exceeds EPA standards for turbidity. But Williams stresses the importance of the Blue Lake system in the long term. The Assembly will have a special meeting on Blue Lake and the upcoming federal inspection of the whole system on December 4.