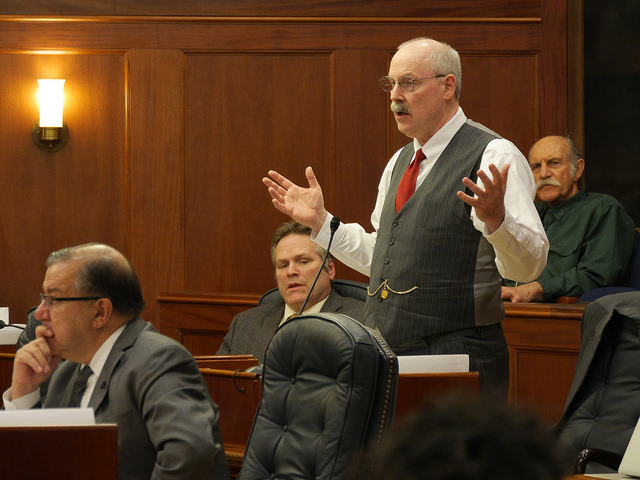 Sen. Bert Stedman, R- Sitka, talks about the Alaska Permanent Fund on March 15, 2017. On Sunday (11-18-18), news broke that he was appointed Co-Chair of the Senate Finance Committee for the upcoming session. Stedman wants to see the spendable portion of the Permanent Fund protected through constitutional amendment and for the payout to be calculated as a percentage of market value. (Photo by Skip Gray/360 North)

The Alaska Senate has a new majority and a significant appointment for one Southeast lawmaker.

Sitka Senator Bert Stedman was appointed Co-Chair of the Senate Finance Committee, alongside Natasha von Imhof of Anchorage. Specifically, Stedman will manage the Senate’s process for developing the operating budget.

Stedman is no stranger to this role. He served as co-chair from 2007 to 2012 at a time of surpluses for Alaska. He returns to that post in a time of recession. Few Southeast lawmakers have held this position. They include Howard Bradshaw of Sitka, James Nolan from Wrangell, and Bill Ray of Juneau in the 1960s and 1970s.

KCAW spoke with Stedman about Alaska’s financial position. State savings has depleted to $2 billion. While many want to tap the Permanent Fund, Stedman thinks there should be a constitutional protection in place to cap withdrawals at a certain level.

KCAW: You’ve put forward a bill (SJR 9) to protect more of the Permanent Fund by the Constitution. Is that correct?

Stedman: Yes. My personal concern – I’m not speaking for the caucus or the finance table, but as your Senator – is we protect the Permanent Fund. In particular, the portion that is spendable by the legislature. We have to make it non-spendable. We have to either roll it into the corpus, which takes legislative action and the governor’s signature, or we convert it to a percent of market value and lock up the whole thing. That’s what I’d like to do, just  like we do with the Sitka Permanent Fund. It has to go to a vote of the people, other than the money that’s automatically taken out every year for the general fund.

KCAW: What needs to happen to ensure that Alaska can still issue PFD checks every year?

Stedman: You cannot have the legislature spend down their earnings reserve. And also if you don’t lock the structure of the permanent fund up in the constitution, the next legislature or the current one could just do what they want with their statutory authority. And that’s not acceptable looking over the past several years where the legislature spent about $14 billion in savings and haven’t fixed the problem.

Stedman expects Governor Dunleavy to also support protecting the permanent fund, but added that Alaska cannot cut its way to a balanced budget.

When asked about his strategy as Finance Co-Chair, Stedman said he wants to defend communities not on the road system while working cooperatively with the Governor’s office and the House. “So rather than have a Mexican standoff, which will be just a big mess, I plan on working with Governor-Elect Dunleavy on his direction in the magnitude he wants to go and make sure it’s fair across the state  and that we [Southeast] doesn’t take the brunt of it unfairly,” Stedman said.

As Governor, Dunleavy will have line-item veto power.

In representing Southeast, Stedman said his big priorities are maintaining the Alaska Marine Highway System and resolving issues within the SB 91, the bill to reform Alaska’s criminal justice system. Stedman voted against it, saying it was a bill “not ready for prime time”

There are noted differences between the new Governor and the Senate’s new finance committee co-chair. “Governor-Elect Dunleavy, coming from MatSu valley, was one of the most conservative legislators in the legislature. Senator Stedman is someone who is known as an individual in his political views. You might struggle if you were trying to characterize him beyond that he’s a Republican and from a very different of the state, coming from the coast,” said Andrew Kitchenmann, state government and politics reporter for KTOO and Alaska Public Media.

Stedman may be one of the few voices from Coastal Alaska with a committee chairmanship. Kitchenmann added, “Based on what we think that the leadership of the House is going to look like and what we know the leadership of the Senate has been announced as, [Stedman] might be the only Coastal politician among the most senior leadership. The exception is Kodiak Senator Gary Stevens, who will serve as the Legislative Council Chair.

Leadership for the Alaska House is up in the air. A close race in Fairbanks sees Republican Bart Lebon five votes ahead of Democrat Kathryn Dodge, which — if Lebon’s lead holds — would give Republicans control of the house. The final count for that race will be on Wednesday (11-21-18) and a recount may also happen.