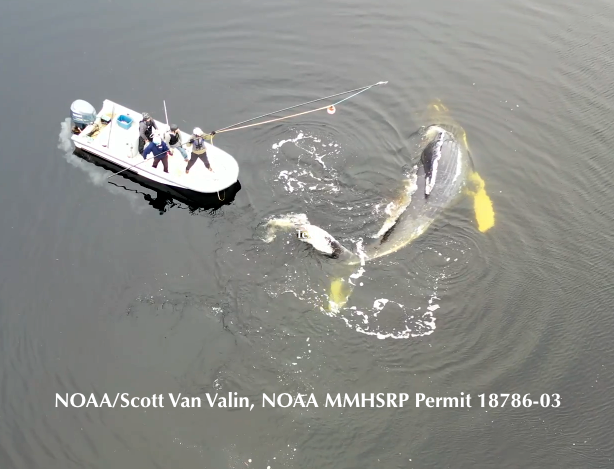 Fred Sharpe uses a customized cutting tool on a kevlar pole to free a whale in Sarkar Cove on November 22, 2018. The whale had become entangled in mooring lines used for a dock, effectively anchoring the animal to the bottom. “At least it’s not moving,” says Sharpe. According to NOAA’s Marine Mammal Stranding Network, Southeast Alaska averages 9.1 whale entanglements per year. (NOAA photo)

The humpback whale which was successfully disentangled on Thanksgiving Day in Southeast Alaska was in a dire predicament: It was caught in heavy mooring lines, and was anchored to the bottom.

According to Dr. Fred Sharpe, the researcher who eventually cut it free, the whale was at risk of suffocation and knew it — making this rescue especially challenging.

So there is one upside to attempting to free a whale that is literally moored to the sea floor.

“At least the animal is not moving,” said Dr. Fred Sharpe with the Alaska Whale Foundation. He flew from Juneau to Sarkar Cove, on the west coast of Prince of Wales Island, the day the entangled whale was reported to NOAA Fisheries (11-21-18).

He’s been working with whales for 32 years.

“So often in Southeast Alaska when there’s an entanglement the animal will break through the gear and end up with crab pot line, or a section of gillnet and maybe some cork line — and that’s challenging because humpback whales are extremely mobile animals,” he said.

Mobile, and huge. The whale trapped in Sarkar Cove weighed in at around 40 tons — about the size of a locomotive.

Sharpe says that the owners of the nearby El Capitan Lodge heard the whale’s distress, and made a prompt report to NOAA’s Marine Mammal Stranding Network. The lodge also got him to the scene quickly in their own aircraft, and took him out to the whale in a boat.

The whale was in bad shape.

“What was particularly worrisome about this individual was that some of the lines were wrapped over the leading edge of the splash guard of the animal’s blowhole,” he said. “And you can imagine, we’re air-breathing beings too, and we know how that feels — that sense of suffocation and inability to breathe. That’s something you have to be vigilant about because the animal is going to be more agitated and responsive, and perhaps have a feeling of desperation.”

So that’s why Sharpe — and NOAA — actively discourage anyone from attempting to disentangle a whale on their own. The best thing the public can do is notify the Coast Guard, and keep an eye on an entangled whale until one of NOAA’s stranding response teams arrives. Sharpe says they get about 20 reports of entanglements every summer, but locates and intervenes in about 2 cases, as people simply lose track of the whale.

Sharpe says that the Center for Coastal Studies has developed an arsenal of tools to free entangled whales — cutters, grapples, knives, and even drones and GoPro cameras.

Then it’s a matter of getting in close enough to do the job, while staying at a safe distance.

“Oftentimes when we’re doing a technique and going to be using cutting knives or tools, those are done using very long kevlar poles so we can stay a body-length or so away from the animal,” Sharpe said. “And then we might give the animal a little love pat, just touch it on the back in the general area you want to cut, just to see how it responds. There are certain angles to approach that tend to be less agitating. There are lots of really subtle techniques you use to assess their condition.”

Because this whale was caught in heavy gauge mooring lines, Sharpe was able to hook a knife under them, and then back the boat away to make the cuts.

Although this story has a happy ending, the statistics about entanglements can be discouraging: Sharpe says recent data suggests that 50 percent of the whales in Glacier Bay show signs of scarring from interaction with nets, lines, buoys, and chains. A lover of seafood, he’s not blaming the fishing industry. Coexisting with whales is always going to be challenging.

“These animals are cognitively and emotionally complex enough that they’ll always keep you guessing,” said Sharpe.

Seeing the whale swim out of Sarkar Cove just before sunset on Thanksgiving not only gave Sharpe a great dinner-table story of the day, but he also describes these positive outcomes as “one of the best feelings in the world.”