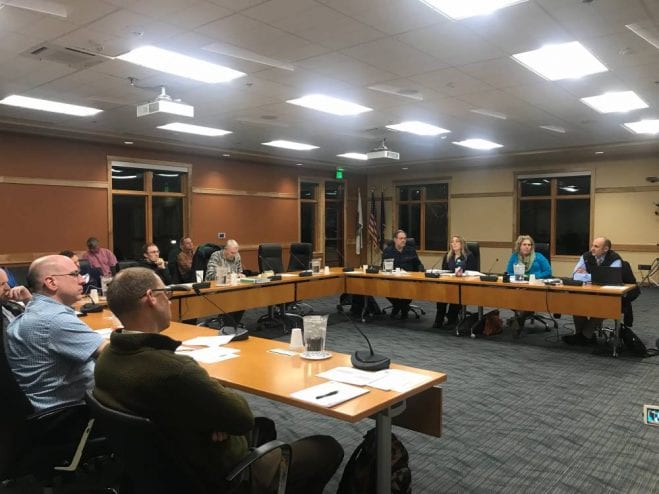 Sitka gets 100% of its drinking water from Blue Lake – unfiltered. If that sounds too good to be true, the City of Sitka worries it is and wants a secondary source of drinking water.

High turbidity events have city officials worried Sitka will lose its special filtration waiver. Combined with an upcoming federal inspection of the dam, the City is pushing the Sitka Assembly to approve the construction of a secondary water source. They presented their plan during a work session on Tuesday night (12-04-18)

To understand why the City of Sitka is pushing for a secondary water source, we’re going to have to roll back the clock. To 2014. The project to expand the Blue Lake Dam was in full swing and for two months, Sitka was cut off from its potable water supply. The city built a backup system. They spent $4 million on a temporary filtration plant at Indian River.

The water met tightened federal regulations, but wasn’t great. Public Works Director Michael Harmon remembers the city got complaints about the color and the taste. “You’d hold it up and you’d smell rotten fish. It would look like apple juice or had a golden brown color to it,” Harmon told KCAW in a recent interview.

Now, a new set of conditions are pressuring the city to once again figure out a secondary water source. There’s two reasons for this. The first is a big inspection.

In 2019, the Federal Energy Regulatory Commission will inspect the penstock tunnel system. Picture a mile of tunnel – 7 to 10 feet in diameter – far below the ground. “That penstock and tunnel provides city drinking water, it provides fire water, it provides electric power, water for NSRAA, and it’s also the source of bulk water when bulk water does get sold,” said Utility Director Bryan Bertacchi.

To keep Sitka’s FERC permit, Bertacchi has to drain the tunnel completely and close the intake gate. That’s the nail biter for him. The gate weighs 26,000 lbs. Were it to fail in some way, as happened at Green Lake in 2016, the community would lose its source of drinking water. A boil water notice would take effect. The impact for the local economy and public health would be significant.

Fixing a failed intake gate at Blue Lake would take two weeks minimum, which Bertacchi described as a “disaster” in the spring with tourism and fishing about to start. Winter is tough too. “If we did that test in the winter and something goes wrong, we’d need a very large crane that’s not available in this town. We’d have to get the crane all the way up Blue Lake Road to the dam,” he said.

To avoid this whole scenario when the penstock is unavailable – due to maintenance or emergencies – the city wants a secondary water source. That’s the first reason. The second reason has to do with water quality.

The city is always monitoring the turbidity of Blue Lake, a measure of the amount of particles in the water. Harmon is worried that turbidity has been too high for Sitka to keep its federal filtration avoidance waiver, allowing the community to forgo filtering Blue Lake Water. To keep the waiver, Sitka cannot exceed five high turbidity events in ten years. Since the dam was expanded, there have already been four – one as recently as last month.

“We’re seeing this new trend of turbidity events that’s leading us to believe we will likely lose our waiver in ten years – if we have four [high turbidity events] in four years,” Harmon said. He added, “That really homes us in on the best solution for secondary water is a filtration system and a permanent one. We can use it anytime a FERC inspection needs to happen. We can use it any time we’re having a turbidity event. We can turn it on and avoid losing service to the customer. 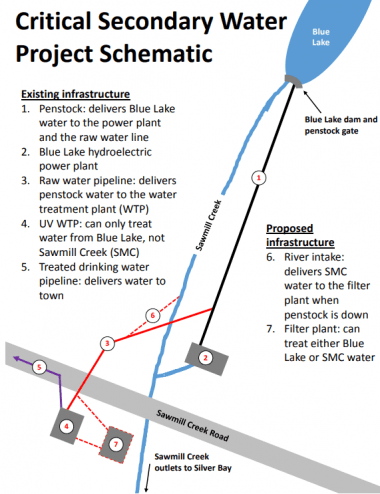 A schematic of the design for the secondary water source, which includes a river intake system that moves water from Sawmill Creek to a brand new filter plant. The system would bypass the penstock tunnel entirely, in the event it is closed for maintenance or emergency. (Schematic courtesy of CBS)

Harmon doesn’t want to use Indian River again. A permanent filtration plant there would cost $23 million due to . After doing a study up and down the road system, they decided the most cost efficient option would be a brand new filtration unit drawing water from Sawmill Creek. It would cost $18 million.

The previous Assembly largely supported this plan, approving application for a low interest loan from the state and raising water rates this year to pay for it. The current Assembly, however, has their doubts and expressed as much during a work session Tuesday night (12-04-18).

Assembly member Aaron Bean wanted to know, “Why the elevated turbidity?” Harmon said staff are investigating. “The most obvious one is the raising of the dam has changed the lake dynamics. We hope that that will stabilize over time,” Harmon said.

Calling in over the phone, Assembly member Richard Wein described the secondary water source is an “added cost” of raising the Blue Lake Dam and said that this project needed further vetting.

Assembly member Kevin Mosher worried about the project staying within the $18 million budget. City staff assured him it would and that the project would only grow more expensive with time through inflation, by about $1 million every year.

City attorney Brian Hanson said building the secondary water source now would mitigate risk in the future. “Whether or not you talk dollars or cents, that is a primary reason that you should go forward, but don’t forget the health and safety of our community. You can’t ignore that. And to delay I think has a considerable risk in that regard,” Hanson told the Assembly.

This notion – that Sitka needs a secondary water source sooner rather than later – seemed to shift the conversation. While seeing the logic of the project, Mosher wondered whether there would truly be enough money within the water fund to pay for it.

Right now, water rates are not expected to rise. But what if they have to to pay for this project? “We may not have as much as we think we’re going to have,” Mosher said. He wondered, “What’s going to happen if this project does go over and then we’re wanting more rate increases? I just really hope this project stays within budget.”

Mosher is narrating what some on the Assembly have described as a “rate death spiral,” which is exactly what happened with the Blue Lake Dam expansion. The project went over-budget. Rates went up to pay for it, but electric usage went down. The echoes of that deficit – which the city is actively working to close – are all over this conversation about a secondary water source in Sitka. But if there is common ground, it’s in the desire to provide clean drinking water and reliable electricity to Sitkans.

After the work session ended, everyone lingered to chat – Assembly members with City Staff – to unpack the pros and cons even further.

The previous Assembly put the decision-making power for this project in the hands of the current Assembly. On December 11th, they’ll vote on whether to enter into a Compliance Order by Consent with the Alaska Department of Environmental Conservation – accepting that $18 million loan and moving ahead with the secondary water source. The vote will be on first and final reading. Should it pass, Bertacchi says he will ask FERC to delay their inspection until that secondary water source can be built.