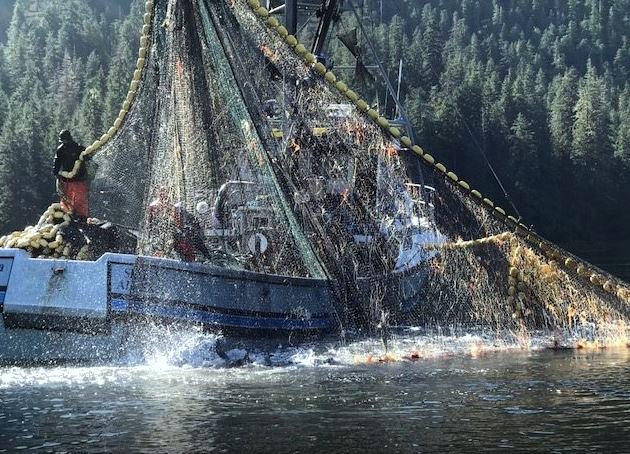 A seiner hauls in hatchery-produced chum salmon in Crawfish Inlet in 2018. Managers knew the ocean survival rate was extraordinary (3-percent) when fishermen landed fish worth over $7 million on the first day. The bonanza saved the season for many in the SE salmon fleet, but also created tension among the different gear groups over equitable access to the harvest. (NSRAA photo)

Reifenstuhl outlined the history of the state’s nonprofit hatchery program for the Sitka Chamber of Commerce (12-12-18), and drew on data that suggests hatcheries are a bet that has paid off for fishermen.

The terrible season of 1974 was the low point of a downward trend in the Southeast salmon harvest that began roughly around statehood. Although 2018 was every bit as bad as that pivotal year, NSRAA general manager Steve Reifenstuhl says it was not as devastating.

“But the big difference this year was that the enhancement program was in place, and that really brought the trollers and the seiners through,” he said.

In Crawfish Inlet alone, NSRAA saw a return of 3.5 million chum salmon to its release site there — fish worth $20 million to the boats that caught them, and $40 million to the processors who put them on the market.

The hope is for just as phenomenal a return in Crawfish next year.

Reifenstuhl explained that Crawfish — though extraordinary — was no accident. NSRAA has been planning the release there since 2012, and borrowed $5-and-a-half million dollars to expand its chum program in the region.

But NSRAA’s operating expenses are paid by the fishermen themselves — in a 3-percent enhancement tax they imposed after the awful 1974 season. He put up a chart that showed a gradual turnaround in salmon fishing, after the legislature, under Gov. Jay Hammond, authorized the creation of hatcheries.

“If you think about that graph you looked at in the mid-70s, when it was at an all-time low,” he said.  “The fishermen are thinking, ‘We should invest the money — the money we don’t have — into an enhancement program that’s never been tried in Alaska. (Except for one in the late 1890s that failed.) Let’s do that. Let’s tax ourselves and do that.’ Think about the risk that they took.”

Reifenstuhl hesitated here in his presentation, choking up a little as he considered the faith placed in an idea by fishermen of that era — many of whom would never fully reap the benefits.

And the benefits have been significant. Salmon fishing and markets are cyclical, but the trend has been up over the last 44 years. Reifenstuhl told the chamber that the risk had paid off.

“Here’s one of our most proud graphs,” he said, putting up a chart showing the revenue NSRAA-produced fish have generated for the fleet over the years. “This is looking at just NSRAA. So to orient you, the bottom line with the open circles is what fishermen pay in 3-percent tax. Every salmon that they catch, whether it’s wild or enhanced, they pay 3-percent of its value to the state, and then it goes back to NSRAA or SSRAA (Southern Southeast Regional Aquaculture Association). But this is just NSRAA: Looking at that 3-percent contribution they’ve put in through 2016, rounded off, is $38 million. The value that’s been returned to them is $257 million, or 6.8:1 benefit-to-cost. For stock market followers that’s 680 percent.”

Hatcheries are not without controversy. Their impact on the ecosystem isn’t understood directly, and when there are failures in wild systems — like chinook returns to Southeast’s big river systems — some wonder if hatcheries are a factor.

Reifenstuhl says that all the hatchery programs combined on the Pacific Rim — including Japan, Korea, Canada, and the US — release about 5 billion fry into the ocean every year. That’s a lot of fish, but it’s roughly one-quarter of the over 20 billion wild fry estimated to enter the ocean.

And, Reifenstuhl says, salmon aren’t the only fish in the sea.

“If you look at all the nektonic feeders (species that target zooplankton as juveniles), salmon represent 3-percent of the predators on that prey item,” he explained. “If you take squid in the North Pacific, that group represents 4-percent. So it’s a pretty tiny percent. And then the other aspect of this is that the wild fish in Alaska have done exceedingly well in the past two decades — as well as enhanced fish. If there were true stress from that entry into the ocean there would probably be less productivity.”

The other problem is straying — or hatchery stocks returning to natural systems and cross-breeding with wild stocks. Reifenstuhl says that Alaska’s hatcheries anticipated this problem by seeding their programs with wild stocks to begin with. Nevertheless, the state is conducting a 12-year, $20 million research project to assess whether the fitness of wild stocks is jeopardized by cross breeding. Although data from Alaska hasn’t been analyzed, Reifenstuhl says that research elsewhere has not shown harm. And straying would be difficult to stop, since it’s encoded in salmon behavior. “Everyone knows salmon stray,” said Reifenstuhl. “It’s why we have salmon.”