Commentary: Commercial herring seining and subsistence are my family traditions 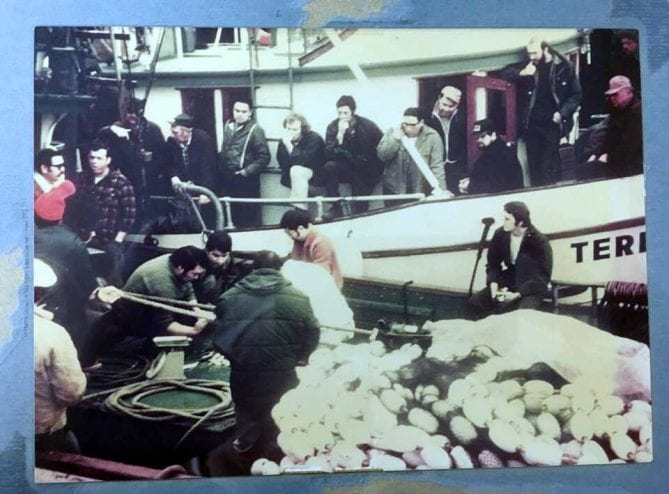 Herring seiners gather at the Sitka Sound Seafoods dock c. 1975 to assess the size of herring and the quality of the roe. Many pictured here were the original permit owners when the fishery went into limited entry management. The author’s father, Leonard Skeek, is standing just to the left of the ladder. (Photo courtesy Chuck Skeek)

Please note: Opinions expressed in commentary on KCAW are those of the author, and are not necessarily shared by the station’s board, staff, or volunteers.

This letter is in regard to the upcoming Sitka herring fishery in 2019. There are a
few intentions in taking the time to write this. I understand much of the wording involved
here is best to include a bit of care so as not to be mistaken or misunderstood. Plainly,
I’d like to point out this: Our chance of harvesting the allotted quota for 2019 is very
slim. I see an importance in writing this letter to explain why.

Maybe it’s best to introduce myself before I continue. My name is Chuck Skeek.
I’ve been a participant in the fishery for nearly 30 years. I grew up in the fishery under
my father Leonard Skeek. When the fishery went limited entry in the early 70s Leonard
was among those to receive one of the original permits. He remained active in that
fishery from that time, but since 2008 the permit has been in my possession. Our family
has been involved in subsistence herring harvests in the Sitka area for quite some time,
and many around Southeast may recall the generosity of my father as he provided
subsistence roe throughout the years to those in various communities. I’d like to state
that as a consumer of herring subsistence that I am in support of subsistence and
commercial harvesting. As a commercial fisherman, I’ve spent my time supporting both
ways of life, and I would say to this day that I am thankful to have had the opportunity to
benefit from both.

I’ve been fortunate to have grown up in a region of Alaska that justifiably takes
pride in who they are and what they do. Having been raised in a family of fishermen, I
was also fortunate enough to have had a family that sought to preserve some of our
Tlingit culture. A look at the various fisheries around the state will reveal a substantial
amount of people like myself, and the sac roe fishery can be held in the same regard.
Past surveys have shown significant native participation in the sac roe fishery, and
perhaps it should be viewed positively that we’ve taken advantage of such
opportunities.

I am a strong supporter of responsible management. I believe the fisheries around
the state are only present because of this type of management, and the two should
continue to go hand in hand. There are many statutes and laws involved with any
fishery in this state, and Sitka’s herring fishery can be held in the same regard. These
laws are in place for many reasons but I highlight their need to protect a resource. The
guideline harvest level (GHL) is a result of those laws, and I expect a continued
conservation because of that. This brings me to the greater point of this letter.
Market conditions will inevitably change year after year. It’s been stated in various
forums and news releases of the reasons as to why the quota wasn’t harvested last
year. I think those statements have been heard already, but for those that haven’t been
informed I’ll reiterate that market demands and size restrictions prohibited the fishery
from continued harvesting. So maybe history repeats itself, and maybe we see the
same happen this year as market demands may not change.

There is a GHL of 12,869 tons of a mature biomass of 64,000 tons, and some
rough figuring can be applied for an expectation for the coming year. I see benefit in
taking the time to consider this for proper expectations and maybe some early
preparations. The minimal average weight restrictions for herring last year seemed to
vary from company to company but for this letter we’ll use the conservative number of
100 grams as that seemed more common among the companies. Anything less than a
cutoff was simply not to be taken. If we take a moment to look at the age classes and
their average weights for the upcoming year, we can safely include the 6-year olds as an
older of the biomass in this marketable category. This age class will account for roughly
24% of the overall biomass, so that number is part of what we will count as being in. If
we continue with this weight minimum in mind, we’ll notice the 5-year olds fall at an
average weight of just 1 gram above that 100 gram minimum. For a conservative
approach to this age group, it may be best to count in half of them. That number is
roughly 10% of that 5 year class, thus bringing us to a rough figuring of only 34% of the
overall biomass that can be considered marketable. That percentage is also
representative of the GHL of 12,869 tons, so one can see we’re looking at a number
that is considerably less than what is allowed.

There are other factors involved that may lower that figure to be harvested. If the
fishery is conducted in a competitive style, then as traditionally done so we will see days
lost to processing. Days will also be lost to poor sampling. Within any day of sampling or
fishing, there are also state and federal waters closed to commercial fishing that will
likely have their intended effect to limit availability. As nature has its way, you will never
see a complete separation of age classes, so there is also the chance that having
smaller fish mixed can eliminate a chance at conducting a fishery for any day. As stated,
the minimum weights were not universal among companies and may have been higher.
All these factors, among many others, still run the chance of lowering what we’ve been
able to figure so far.

I feel compelled enough to take the time to make some of these points known in a
public manner. Perhaps some misconception can be avoided, and a constructive
approach can be taken for what appears to be a likely outcome. If an industry and the
public can come out of the winter with these numbers in consideration, perhaps some
surprise can be prevented and a picture of fleet activity having a lesser impact on a
biomass can be imagined. The safety of a resource is always something I have in mind
with the fisheries I find myself participating in around the state, and I expect this year in
Sitka to be conducted with the same care. I would like to close this letter by adding that
this information is provided with a respect to the resource we’re privileged to harvest
from each spring. This letter is also provided with the same reverence to the community
of Sitka and all those that have an interest in this resource.