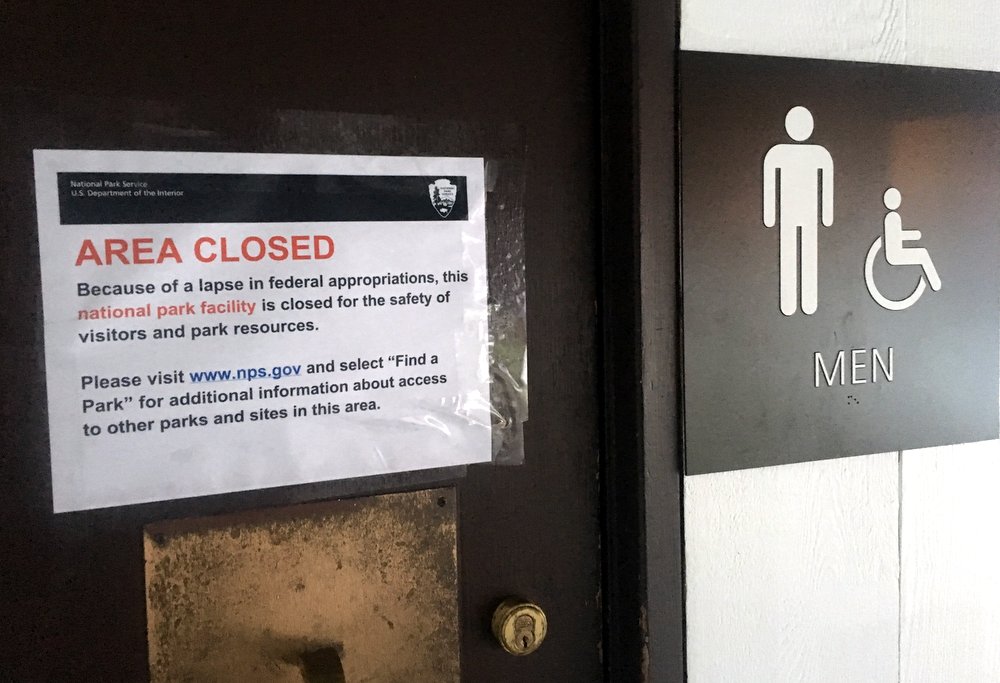 Go before you go. Anyone who wants to visit the restroom at Sitka National Historical Park during the government shutdown is instructed to visit a website instead. (KCAW photo/Robert Woolsey)

Many Sitkans returned to work the day after Christmas, except for civilian federal employees, who remain on indefinite furlough following last weekend’s government shutdown.

KCAW’s Robert Woolsey checked in with some of the local federal agencies to see how things are going.

Note: Congress is scheduled to return from its holiday break on Thursday, December 27. Sitka district ranger Perry Edwards is a current board member of KCAW.

Voicemail audio: “Thank you for calling Sitka National Historical Park. Our staff is currently unavailable, but please leave a message and we’ll return your call as soon as possible…”

That could be a while. I tried calling Sitka National Historical Park first thing Wednesday morning, then I stopped by the Visitor Center in the afternoon. Although the buildings are dark, the park trails are open — but not the bathrooms.

So if you’re headed to a National Park facility in the near future, my advice to you is the same that I used to give my young kids: Go before you go.

Sitka National Historical Park is the most visible federal agency in Sitka, situated in the heart of downtown. But in terms of sheer impact, the Forest Service is hardest hit by the furlough.

“For us it means please standby,” said Perry Edwards, the district ranger for the US Forest Service. Prior to the start of the shutdown at 12:01 a.m. Saturday, December 22, he met with the 53 staff members to remind them of some policy around the furlough — like leaving government cell phones and emails unanswered — and sent them home with no assurances of when they would return to work, or if they would receive back pay.

“There is no guarantee that we’ll get paid when it’s over with, but traditionally Congress has said that we will back fund those people,” said Edwards. “But until this is resolved, no one’s going to get paid. So if we have younger families that don’t have rainy day funds and are dealing with mortgages — this could be a big deal for them.”

Everyone’s staying home in the Sitka district except for two law enforcement officers, and Edwards — who says the only business he’s permitted to work on is the furlough itself. Cabin rentals are unaffected by the shutdown, since they’re handled by a third-party contractor, but just about everything else — seasonal hiring, contracting, outfitter/guide permitting — has been put on hold.

And Edwards says that the longer the shutdown lasts, the greater impact will be on the district.

“If it’s not too long, I don’t think it (the impact) will be huge,” said Edwards, “but it puts that much of a burden on employees when they do get back because they’re that much further behind.”

In addition to the Department of Agriculture — which manages the Forest Service — the funding bills not yet enacted in Congress cover US Rural Development, the Food and Drug Administration, and the US departments of Commerce, Justice, Interior, State, Transportation, Environment, and Housing and Urban Development. The Post Office has been funded and will continue to deliver mail as usual.

Although the Forest Service is shut down, a number of services provided by the Department of Agriculture will continue for a while on prior funding. Such as…

–Most other domestic nutrition assistance programs, such as the Commodity Supplemental Food Program  and WIC will continue to operate at the State and local level with any funding and commodity resources that remain available.  Additional Federal funds and commodities will NOT be provided during the shutdown.

–The Child Nutrition (CN) Programs, including School Lunch, School Breakfast, Child and Adult Care Feeding, Summer Food Service and Special Milk will continue operations into February. Carryover funding will be available during the shutdown to support meal service into 2019.

The shutdown was prompted when Congress and the White House came to agreement on a budget package — with President Trump signing 5 of 12 appropriations bills, funding 75-percent of the government. But before signing the rest he dug in his heels and insisted that Congress appropriate $5 billion for a border wall with Mexico — and the standoff continues.

Alaska Sen. Lisa Murkowski is disappointed by the President’s actions, saying in a statement: “We owe it to the American people to do our jobs, and govern.” Since there aren’t enough votes in the Senate for a wall, she hopes leaders from both parties work together to reach an agreement on border security “in a manner the President will accept.”

Ironically, border protection is one of the other areas of the government that is not being funded right now.

Stephanie Halama, the port director for US Customs & Border Protection in Juneau (which oversees Sitka), says her staff has been furloughed since December 22 — but unlike the Forest Service, they’ve been showing up to work at ports of entry anyway. In fact, Chuck Hoene, who works in Sitka during the busy summer season, is currently reassigned to the border on the Alcan Highway near Tok, Alaska.

Like Perry Edwards at the Sitka Ranger District, Halama is hopeful the shutdown doesn’t last too long.

And finally, at the US Coast Guard things are business-as-usual for all uniformed personnel. Lt. Brian Dykens, with District 17 public affairs, says all Coast Guard civilian employees have been furloughed, unless they are directly involved in the Guard’s mission regarding national security, or the protection of life and property.

Dykens says Search and Rescue and oil spill response remain at full strength, but some other things — like buoy maintenance and the credentialing of mariners — will be delayed until the shutdown ends.