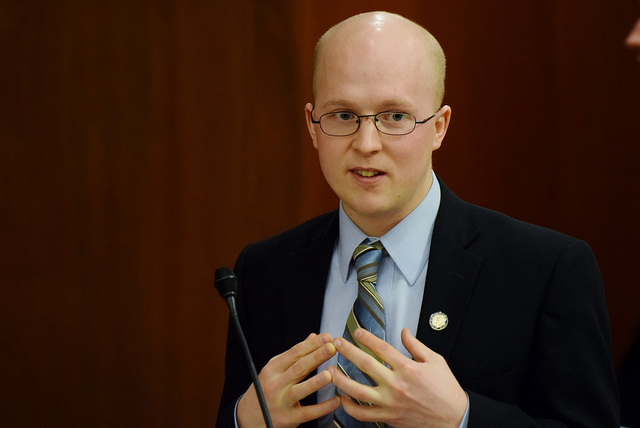 With a new governor and one key House race yet to be decided in the Alaska Supreme Court, the next session in state government remains a bit unpredictable. District 35 Representative Jonathan Kreiss Tomkins spoke with KCAW’s Katherine Rose about his mindset as he returns to the capitol  later this month for his fourth term in office.

If Jonathan Kreiss Tomkins was an emoji, he’d be shrugging his shoulders right now as he prepares for legislative session to begin in Juneau later this month. “Legislative session is probably best summarized, at least right now, as total and complete uncertainty.”

With the Fairbanks 1-vote lead election still in litigation, with a hearing scheduled for Jan 4., and with Representative Gary Knopp leaving the Republican caucus in December to call for a bipartisan caucus, there’s still no clear majority organization in the House.

“We don’t really have any notion of what the House of Representatives is going to look like,” he said.

And as for the budget, even more uncertainty. Kreiss- Tomkins says he hasn’t spent too much time on the preliminary budget Governor Dunleavy released in December, because it’s likely not close to what his real budget will be. But he’s sure of one thing.

“They’re in an impossible math problem given everything the governor elect has promised on the campaign trail, so something is going to give. My concern is if they disproportionately affect coastal Alaska.”

He says Governor Dunleavy’s budget will be marked with austerity. He knows from experience, seeing what then-Senator Mike Dunleavy was focused on as chair of the Senate State Affairs Committee — a responsibility which Kreiss-Tomkins later held in the House of Representatives.

“We have a really cordial relationship. I work with him well personally, we just see the world differently. But basically when he was in charge of writing the budget for the Department of Administration, which includes a lot of things, including all public radio funding in Alaska, he zeroed out public radio. Zero. Goose egg,” Kreiss-Tomkins said. “So this very station would be somewhat in peril. And he has complete and total power to line item-veto all public radio funding in the budget.”

He says the budget that came out of that committee could give a better picture of what Dunleavy’s budget may ultimately look like.

“I think the ferry system was another biggie. Potentially public education. There’s a couple of services that we really rely on in coastal Alaska, that I think a lot of people don’t realize get state funding. I think there could be some real pain to the region were there to be some line item vetoes there or just a budget that relies more heavily on austerity,” Kreiss-Tomkins said. “Basically every aspect of our economy is directly linked to some line item in the state budget. And it’s all up for grabs.”

Everything except the PFD, which Kreiss-Tomkins doesn’t think is realistic.

“It’s only realistic to pay out a $3,000 PFD if we’re basically, you know, willing to accept dozens of layoffs in the school, and ferry service worse, if this is even possible, than our present ferry service, and not have Sawmill Creek Road and HPR plowed on a regular basis.”

But he’s optimistic about some things, even if he’s uncertain about others.

“I’m excited about the Senate, that Senator Stedman is back on finance,” he said. “There’s a lot of really good people of all parties in the house again these coming two years. The budget is clearly issue number 1 in Alaska, but outside of the budget, there’s a lot of, sort of, meat and potatoes policy issues that are important and bipartisan collaboration that’s been happening. That’s something I’m looking forward to sort of digging into come January.”

Legislative session begins January 15. Governor-elect Dunleavy is expected to release a new draft of the budget with spending cuts. It will then go to the legislature, and once they’ve passed it, Dunleavy will have line-item veto power.