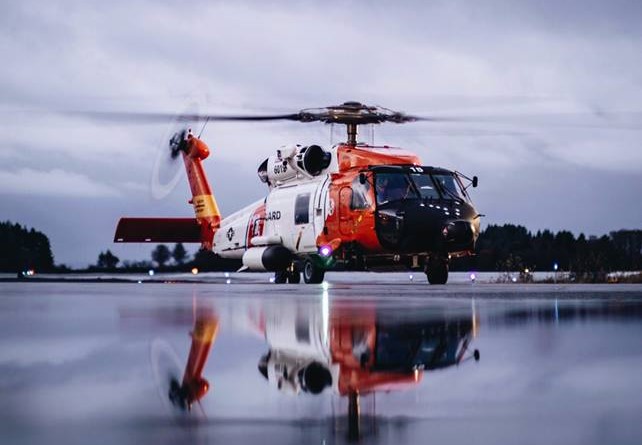 One of Air Station Sitka’s three Jayhawk helicopters warms up on the ramp. With a staff weighted toward pilots and highly-trained technical crews, Frawley says Air Station Sitka can go some time without paychecks. But he’s also prepared to help personnel who are “really up against financial distress” during the government shutdown. (USCG photo/Austin Clary)

Coast Guard personnel in Sitka are reporting for duty as usual during the government shutdown — and hoping they’ll draw paychecks next week.

Commander Michael Frawley says the 120 uniformed personnel at Air Station Sitka — and 1 essential civilian staff — are working without the certainty pay while the President and Congress remain at odds over funding for a border wall with Mexico.

Frawley took questions on the impact of the shutdown during presentation to the Sitka Chamber of Commerce this week (1-9-19).

No one’s missed a paycheck in the Coast Guard — yet. Although it’s the second-longest (partial) US government shutdown so far, Frawley said the Coast Guard’s payroll cycle functioned through the end of the year. 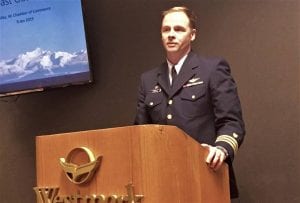 If people are on edge at the Air Station during the shutdown, Cmdr. Michael Frawley is giving nothing away. “I hope I’m paid for today,” he told the Sitka Chamber, “but it’s always been ‘work first, get paid later’ (in the military).” The next payday for the Coast Guard is January 15. The Department of Homeland Security — which includes the Coast Guard — is among the agencies that President Trump is refusing to fund in his dispute with Congress. (KCAW photo/Robert Woolsey)

“Everyone was paid on the last pay period, which ended December 31. Our next pay period in January 15.* We hope that Congress and the President can come to an agreement. If they don’t, they don’t. This kind of works like every other pay period. I work first and they pay me next, so I’m waiting to see.”

He said that the Coast Guard is distributing information to personnel on available resources “if they’re really up against financial distress,” but that overall his staff is weathering the shutdown — for the time being.

“Right now we don’t have a large number of folks who are living paycheck-to-paycheck. Being in the Coast Guard — being in the military — you’re paid pretty well. And as long as you’re not going out and having expensive habits like German sports cars or multiple wives — stuff like that — then you’re living within your means.” (Audience laughter)

Frawley said that the Coast Guard Mutual Assistance program is available for personnel facing tough financial times. The program’s homepage invites members of the Coast Guard to apply for emergency medical assistance and financial counseling, but states that its resources “are not without limit.” The site says that about $150 million is needed to meet a typical payroll for all uniformed and civilian employees.

Note: For a different perspective on the impact of the shutdown on the Coast Guard, see NPR’s interview with Adm. Thad Allen, former Coast Guard Commandant. Allen describes base pay for  enlisted personnel as being on par with “poverty level” in some jurisdictions. Additionally, Alaska Sen. Dan Sullivan recently introduced a bill to fund the Coast Guard during the shutdown. You can listen to his remarks on the situation here.

Frawley urges Coast Guard members to be patient, and to be judicious about where they’re getting information about the shutdown.

And some final advice on the shutdown from a person who flies helicopters in 300-foot visibility in Southeast Alaska: “Be cool. Nobody lose their mind.”

*Note: The payday for many federal employees was Friday, January 11.