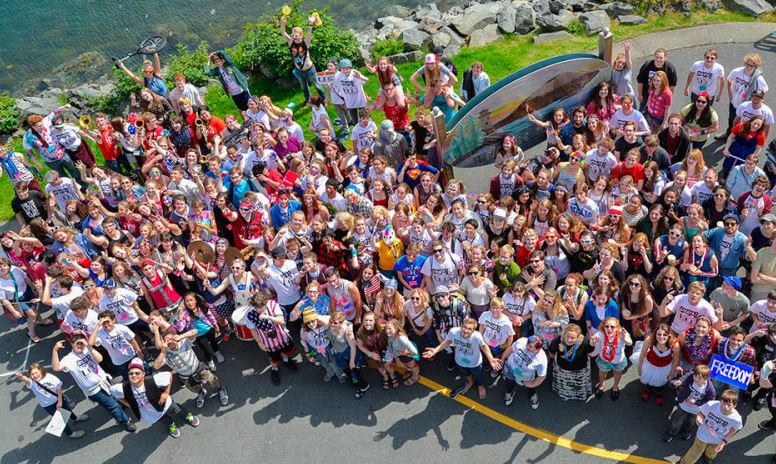 Although registration took off at a blistering pace on January 1, Schmidt says there’s still room in camp — especially the week-long “intensives” which follow the regular two-week multi-disciplinary programs. The camp enrolls up to 250 students each for the high school and middle school camps. The high school camp typically includes a group march in Sitka’s July 4 parade. (SFAC photo)

The rush is on in Sitka, but it’s not for expensive waterfront property.

It’s for spaces at this summer’s Sitka Fine Arts Camp.

Camp director Roger Schmidt says that he opened registration at 12:01 a.m. on January 1st, and within the first hour 240 students had registered for the middle school and high school camps: A new record for what has become a special hour for the organization. 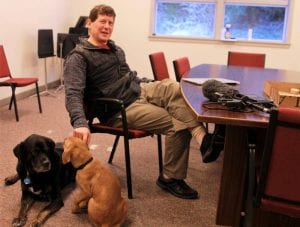 Heading into his 19th summer, camp director Roger Schmidt enjoys a moment of puppy therapy. “Every year I worry that we won’t make enrollment,” he says. That doesn’t look to be a problem this year. (KCAW photo/Robert Woolsey)

It’s strange crashing a staff meeting at the Sitka Fine Arts Camp. Their staff meetings don’t sound like most.

Schmidt — You know we’re doing Pink Floyd, The Wall — I mean ‘Dark Side of the Moon’ this year? The whole thing? Drew and Joe and Ed Littlefield?
Drew Sherman — We’ve got all the freak-out stuff.
Schmidt — Yeah, with lights and everything.

Here’s a group of people in Xtratuf boots sitting around a conference table discussing how they’ll stage a full-scale tribute concert to Pink Floyd. More on this in a moment. I’m here to ask Roger Schmidt how 12:01 a.m. January 1 came to be a special time at camp.

“Yeah, it never was meant to be a thing.” he said. “We just opened registration one year on January 1. So we stayed up like everyone else on New Years and flipped a switch. And little did we know that the second we flipped the switch kids started registering. They were waiting, too. And that’s how it started.”

Since January 1st the middle and high school camps have almost filled. Each can take 250 students for the two-week long sessions. To create more opportunity, the camp is adding special programs called “intensives.”

Schmidt says it’s a lot like going to college and choosing a major.

“In many ways people say, I wish camp were longer,” said Schmidt. “And so this allows a high school kid for example to come to the camp for three weeks, so they can do the multi-disciplinary program with arts, theater, dance, creative writing, and then they can say ‘I want to dive really deep into writing.’ And so they can put on another week, where they’re just doing writing.”

The intensives, plus the regular sessions for elementary, middle, and high school students — plus the Musical Theater program, the Native Jazz Workshop, and other special programs — puts the total summer enrollment for the Sitka Fine Arts Camp at just over 1,000.

Schmidt has never asked anyone to calculate the economic contribution of the camp to Sitka, but he knows it’s huge. Parents of younger students often remain in town and take extended vacations in the area while their campers are in class.

Note: Tuition at the SFAC is $1,500 for residential campers, $880 for day students. Scholarship funding is available. According to the camp website, there is a waitlist for female students in the residential high school camp.

It’s his 19th summer directing the camp that he himself attended as a student. Although he says that he’s anxious about reaching full enrollment every year, it doesn’t really show on his face.

“I think it’s the kind of job that’s supposed to keep you young. I do have some gray hairs — and I’m missing some hair now — but it is a great job,” said Schmidt.

There’s traditionally a lot to do before campers arrive in summer. Schmidt holds a 100-volunteer day in May to get the campus in shape.

But before that, there’s Pink Floyd — a note-for-note performance of their “Dark Side of the Moon” album by local musicians.

Why? At the Sitka Fine Arts Camp, the better question is Why not?

“We wanted to a big stadium rock show,” said Schmidt. “So we’re doing it!”

Pink Floyd will play on February 15 and 16 at the Sitka Performing Arts Center. And next year’s tribute concert has already been selected: Led Zeppelin.