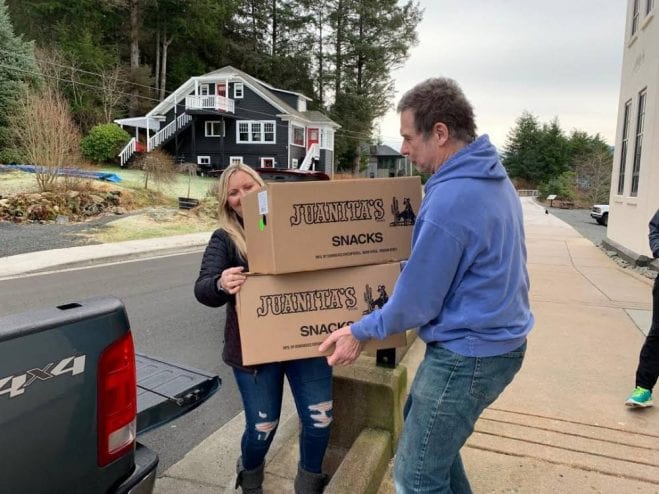 Jaime Saladis passes boxes of donated food to Keith Nyitray of the Sitka Food Co-Op. The food will be available for pickup at the Sitka Sound Science Center on Monday (1/21/19) for furloughed federal employees (KCAW/ROSE)

27 days into the longest partial government shutdown in US history — and less than a week after missing their first paycheck — a group of Coast Guard spouses is organizing a “Federal Employee Pop-Up Pantry” to alleviate  financial stress on families affected by the furlough.

KCAW’s Katherine Rose met the group at the Sitka Sound Science Center while they unloaded donations to put in the historic Mill Building.

Nina Vizcarrondo is a Coast Guard veteran. Her husband Josh is a current member, and on January 15th, when he didn’t receive his paycheck, they had an unexpected family emergency.

“That same day, actually, my dog got a really, really bad seizure,” she said. “We thought he was going to die.”

It was after vet hours, and they knew there might be an extra fee for an emergency visit.

“We literally had to look at ourselves, Josh and I, and be like ‘Can we afford to take him in after hours?’ Because we didn’t get paid. So now we really are double-thinking everything.”

These are some of the decisions federal employees on furlough are beginning to grapple with as one missed paycheck looks like it could shortly turn into two. And it’s not just emergency costs they’re debating. Vizcarrondo has two children, one a newborn. And they’ve been waiting to get his birth certificate from the hospital.  She says two months ago she might not have worried about the cost, but today she notices.

Jaime Saladis’s husband has been in the Coast Guard for nearly 20 years. They’ve spent the last four in Sitka. She says the impact of the shutdown, up to this point, has been a slow burn.

“I think it’s slowly trickling down. The feelings are starting to come up. Like, ‘Oh, there’s another day. Oh. You wake up, you check the news. It’s still happening, things are getting more serious,” she said. “So it’s led up to this point where we need to actually do something.”

So Saladis and Vizcarrondo are doing something. They’re working with Alex Thorne of the Sitka Sound Science Center to organize a ‘Federal Employee Pop Up Pantry.’ Thorne is the Business Development and Whalefest Director for the center. While she knows items from a pantry can only go so far, she’s hoping they can free up a little money people can redirect toward bigger bills.

“If we’re able to take some of the everyday necessities off that are quite expensive. Toilet paper, paper towels, diapers, formula. If we can assist to take those off, that money can be allocated towards your utilities or your rent,” Thorne said. “I know it’s not a huge thing but hopefully it’s something that adds to easing stress for people.”

So far Sitka Bottling Company and the Sitka Food Co-Op have donated drinks and chips, baby food, and granola and pasta, but organizers are hoping for more. Coordinating the effort hits close to home for Thorne- her husband is in the Coast Guard too. And she’s thinking about younger federal employees who may not have as many resources.

“For me and my husband, had something like this happened 10 years ago to us, it would have been a devastating problem,” Thorne said. “It would have been going to parents, saying ‘Hey can you help me out or can you float me for a little bit, or an additional job. We’re down the ways a bit now, so there are other things in place, but we also don’t have children and things like that.”

Vizcarrondo says there are some families in Sitka who are trying to figure out next steps if the shutdown continues. She hopes the pop-up pantry can provide a small cushion for them.

“They’re concerned. They’re having conversations with their spouses and their families that you wouldn’t have had before,” she said. “Do we get a second job? Things we wouldn’t have considered before. It’s taking a hard toll emotionally.”

Saladis says they’re hoping the pop-up pantry can be a neutral, welcoming space for people who may feel uncomfortable asking for help.

“People have pride. I’m prideful. I don’t want to ask for help. I don’t want to knock on somebody’s door. I’m the person who’s gonna help, and that’s what we’re trying to do here,” she said. “That’s hopefully going to encourage people to come out and help us and feel comfortable taking a bag of groceries. Come back tomorrow if you need more.”

In the meantime, the deadlock over funding for a border wall with Mexico doesn’t appear close to resolution. Alaska’s senators Lisa Murkowski and Dan Sullivan have signed on as co-sponsors of legislation that — if passed — would protect the Coast Guard from future shutdowns. Nevertheless, the question for Sitka’s Coast Guard personnel remains how to get through this one.

If you would like to donate to the ‘Federal Employee Pop-Up Pantry,’ you can bring toiletries and non-perishables to the Sitka Sound Science Center this Saturday from 10 a.m. to 3 p.m. If they receive enough donations, organizers will open the pantry to all furloughed federal employees Monday afternoon from 3-7 p.m.

Click here for a list of services, discounts and deferred payments provided to federal employees in Sitka during the government shutdown.