Ahead of cuts, school board asks for community priorities 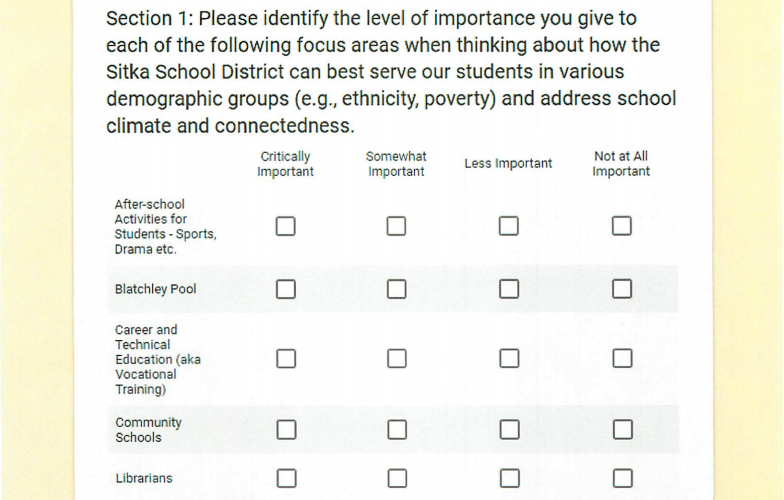 Update (Feb. 14, 2019, 12:13 p.m.): The Sitka School Board has published the survey pictured above, which asks community members to outline their priorities as the district considers budget cuts as a consequence of drops in enrollment and possible cuts to education funding by the state of Alaska. That survey can be found on the school district’s website or at this link.

Originally published (Feb. 7, 2019): The Sitka School Board is worried that proposed cuts in the Alaska state budget will force further cuts in the district budget. That’s after low enrollment projections drove the board to make cuts this year to school libraries and counseling services.

Now, they’re asking community members for feedback through an online survey on which programs to prioritize as the district tightens its belt. The district estimates that the proposed $20 million cut to the state education budget will impact the Sitka School District by over $187,000. At a meeting last Wednesday (2/6/19) Board President Jennifer McNichol said the survey allows for students, teachers and the public to give input on where to make the cuts.

“As we know and as we’ve heard, we’re not going to have a surplus of a budget this year. So, once again, we’re going to be faced with difficult choices and we’re trying to provide an avenue for people to provide input,” she said. “Not everybody has the time in their lives to come to budget work sessions, budget hearings and speak to us.”

That survey will be available online on the district’s website. It asks respondents to identify the level of importance of certain services the district funds like after school activities, librarians and arts programs.

The final hearing of the school district budget and its approval is scheduled for April 17th.

In 2018, school safety and peer climate were the districts greatest strengths among students and staff. It also found that students felt the district could do more to curb drug and alcohol abuse among youth. Family members reported that schools could do more to represent their culture in lessons and school activities.

In other business, the school board received a $10,000 donation from the Friends of the Pacific Arts Performing Center for the continuing maintenance of the facility. The board also recognized Cass Pook for her work in the district on suicide prevention and approved travel to Anchorage for Sitka High School’s model UN team who will represent the Ivory Coast in a statewide competition.