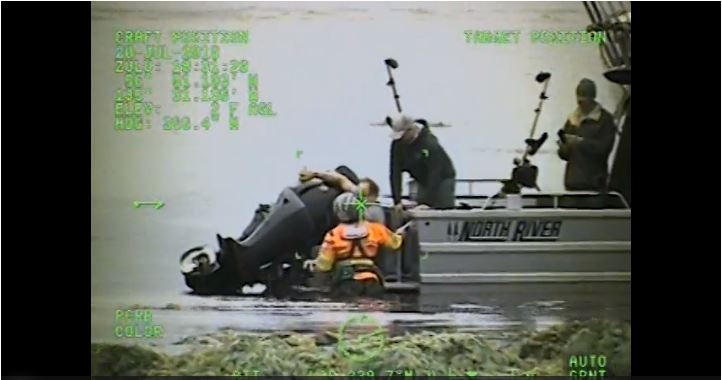 A helicopter from Air Station Sitka rescued a boat captain after an injury aboard a fish processing vessel northeast of Biorka Island on Saturday, July 20, 2019.

The call came in to Coast Guard Sector Juneau around 10 a.m. that the man had potentially severed several fingers. An Air Station Sitka helicopter was already airborne, training nearby. The crew heard the request for help over VHF radio and changed course to assist the victim.

“It was great timing for everybody involved,” Lt. Justin Neal, co-pilot on the response, said in a statement. “We were maybe two minutes away and listening to channel 16 like we always do. Somebody called out needing help and we were able to respond.”

A Good Samaritan charter fishing vessel helped the captain off the processing vessel and onto theirs, then ferried him to shore, where the Coast Guard crew had landed their helicopter on the beach. He was able to walk to the helicopter himself, assisted by two members of the flight crew.

The Air Station crew flew the man to Sitka, and transferred him to awaiting EMS personnel.