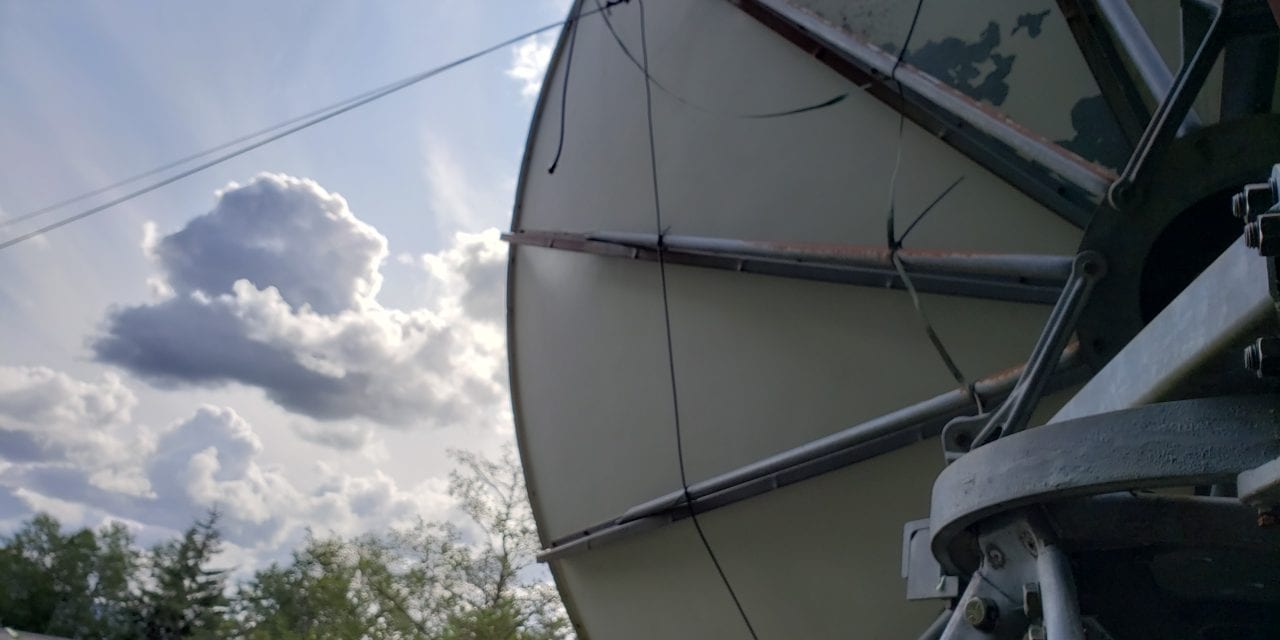 From August 12th to September 1st, I traveled to each of Raven Radio’s translator communities with the CoastAlaska Director of Engineering, Rich Parker, to conduct a technical assessment. Before I go much further, I want to acknowledge what a privilege is was to undertake this journey. I’m fortunate to be a part of the larger community of Southeast Alaskans, living and working in a place of unparalleled beauty.

We owe a debt of gratitude to the Rasmuson Foundation, Alaska Seaplanes, Harris Air, Allen Marine, Sealaska Corporation, SEARHC, Laughing Raven Lodge in Port Alexander, Tony Mugart & Tyler Pitts in Elfin Cove, and Gordon Chew (proprietor of Tenakee Logging Company) for their financial and in-kind contributions to the project. I would be remiss if I didn’t also mention the ongoing generosity of our volunteers and equipment hosts — but you’ll meet them as I continue this report.

Operating translators to supplement a station’s coverage area isn’t such a novel idea, but Raven Radio’s broadcast chain is exceptional. KCAW operates the most translators in the state of Alaska. Covering a swath of rugged coastline almost 300 miles long requires verve and creative engineering. Almost all of our translators were installed in 1987-1988 in accordance with FCC law at the time. The laws have since changed. Time and weather are unstoppable forces of change as well.

Since joining Raven Radio last October, I’ve spent quite a lot of time fielding calls from every one of our translator communities. Our signal in those places seemed really brittle — sometimes going off the air for months at a time or experiencing continual interruptions. Due to the challenges created by distance and capacity, there has never been a systematic assessment of KCAW’s translator facilities and service.

Something had to be done.

And in November 2018, I started the fundraising and project design for this work, with a lot of help from Robin Sherman (Program Manager at the Sitka Legacy Foundation,) Mollie Kabler (Executive Director at CoastAlaska,) and an amazing team of engineers: Rich Parker at CoastAlaska, Michael Brown at Brown Broadcast Services, Steve Hamlin and Bill Prendergast at Alaska Public Broadcasting, Inc.

Everything came together this summer, and we were able to do this assessment. Now that we’ve collected this data, we will start analyzing it to come up with a plan and a budget. In the next 2-3 years, we will go back to each community to install new equipment, improve facilities, and conduct training for our volunteers who steward each translator.

It might seem like a lot of work – and it is – but I believe that it is crucially important to live up to the service part of KCAW’s mission. Public radio is a connective tissue in our lives as Southeast Alaskans, separated by the vastness of rock, water, and distance as we are. If you believe this too, you can join me in the work.

So, who are we broadcasting to?

We arrived in Angoon to reports that the station was unbearably garbled. After lunch at the Angoon Shu Senior Center, we set to fixing it. We found that a new piece of equipment we’d installed at our satellite uplink needed calibration. After phone calls to Sitka, Anchorage, and Fairbanks, the issue was fixed. We then spent some time crawling around the satellite, trying to identify structural issues (and eating from the thicket of thimbleberries that surround it.)

One of our incredible local volunteers, Gordy Williams, introduced us to Ron Gleason, the principal at the school (and our generous site host), Joshua Bowen, Mayor, and 25 community members throughout our stay to hear how we can be better partners to Angoon. In a lot of ways, coming to this community first set the tone for the rest of the trip — we talked to a community of people who want to engage more with their radio station, who want to hear more about what’s happening throughout our region.

It was in Pelican that we realized: there’d be no perfect time to do the assessment AND meet with all our community members. We had arrived during peak commercial fishing season, and many people were out on the water.

Nonetheless, we were able to conduct our assessment with help from Quinton, with the City of Pelican Public Works who is constantly monitoring our signal (since all our equipment lives in the shop where we works!) We also had a chance to meet Mayor Walt Weller, the new principal and teacher at Pelican School, and a number of long-time supporters.

We learned that Pelican is just one part of a community of folks living in Lisianski Inlet, and that any signal upgrades we make must also reach Phonograph and Sunnyside. Related to that: the engineering for each translator was going to be very different.

When I took on the General Manager position, I wouldn’t have guessed that my work would involve machetes. But I had to cut our way to Elfin Cove’s transmitter to do the assessment. Despite appearances, everything inside the box was working — and with a little help from Erik Stromme, we cleared out most of the overgrowth that was distorting the signal. We’re grateful to the Community of Elfin Cove Nonprofit Corporation for everything they do for the station.

While we were visiting, Elfin Cove was bustling. Shirley, the owner of Coho’s, shared her salmon quiche with us while tending to a full bar. Summers are a drastically different from the winters; very few people live in Elfin Cove year-round.

We met community members before flying out, talking to a full room of listeners at the Community Center. Our time in Elfin Cove was informative, and I’m grateful for the time and hospitality given to us by Mary Jo Lord-Wild, Tyler Pitts, Tony Magart, and Wayne Stauffer.

We spent a bunch of time in Tenakee Springs somewhat unintentionally; our only flight cancellation happened as our seaplane flew by to find the seas too choppy for a landing. We had a lot to do at this site, though. The satellite output cable fell from the carrier wire, and had to be reattached… 50′ off the ground.

Words can’t express our gratitude to Gordon Chew, who helped us problem-solve a number of issues, who cut back a grove of trees surrounding the satellite, who gave us a place to sleep, and who helped channel our musical abilities.

We met community members at our planned gathering, and talked to Steve Lewis – who offered to take us to his house to conduct a field strength test. Mind you, getting to his house took a 30 minute skiff ride.

Yakutat is one of our most distant communities, but it is also the newest, with more modern equipment. We did a thorough assessment nonetheless, getting on top of Yakutat School to inspect our antenna. We are so grateful to William Sprott, the new Superintendent of Yakutat School, for hosting us and for the enthusiasm around new, creative partnerships.

This site included a few mysteries, like: why didn’t the signal reach the fishing camps on the Situk River? After making some adjustments, and taking some readings, we were able to make sure that KCAW reaches this community — which is especially important as they’re one of most vulnerable in extreme weather or emergency events.

We were also thrilled to meet the folks involved with KYKT-LP, a low-power FM station owned by the Yakutat Tlingit Tribe and operated by Lee Benson. I also had a chance to talk with Gloria Wolfe, who regularly contributes cultural programming to KYKT-LP. Low power FM stations like this one are an important part of the public radio ecosystem, and I’m excited to explore some kind of partnership with the Tribe to support locally-originated content production.

I haven’t mentioned this much so far, but a few of our translator communities are ‘boardwalk towns.’ There are no paved roads in these places – everyone lives off the public boardwalk. In Pelican, people rode bikes and drove ATVs. In Elfin Cove, most people got around by foot. In Port Alexander, the boardwalk was walled in by red huckleberries.

Raven Radio’s antenna is located a few hundred feet up a forested hill, with the transmitter right next to its power source! Everything is amazingly green and growing in Port Alexander, and there’s a lot of tree cover to consider when broadcasting.

We’re deeply grateful to everyone at Laughing Raven Lodge for their enduring support of the station: Pete Kimsey, Sue Kimsey, Molly Kimsey, and Ryan Martin. It’s because of them that we’re able to broadcast, and we’re excited to partner with them to improve the signal.

The Organized Village of Kake was our very last stop on this trip. It’s also the other location of a stand-alone transmitter facility in a reefer, down or up a steep hill (depending on your perspective, I suppose!) Another interesting aspect to our broadcast in Kake is that it’s fed the KCAW signal over the air, meaning that there’s enough of a line-of-sight from Sitka – across Baranof Island – to be able to feed this site differently. ARCS is broadcasting in Kake, so it’s more than possible to feed our transmitter with the more reliable satellite feed. That’s our next project here, which can be done soon.

The former ED of the OVK, Gary Williams, works to keep us on the air. We met with him and the current ED, Dawn Jackson, to discuss our local service. Gary is working to develop the waterfront cannery into a destination and economic engine. He took me on a tour of this expansive space — and it will be exciting to see it develop and open.

Translatorpalooza, as I’ve taken to calling this trip, was an incredible opportunity to gain perspective on what it means to be a public radio broadcaster in Alaska. I’ve mentioned this before, but I’m grateful for this and for the fact Raven Radio serves the incredible, creative community of Sitka. I’m energized by this work, and feel that I’m closer to understanding how it can be love made visible.

Thank you for reading about our adventures! Remember: you are an important part of this work, as you make it possible with your gifts.