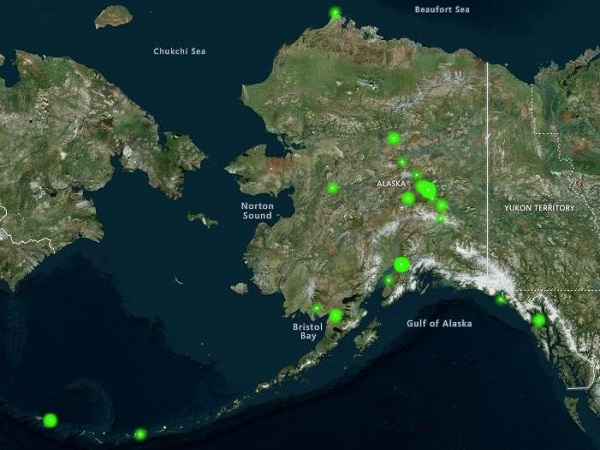 PFAS compounds are often referred to as “forever chemicals” because they don’t break down and persist in the environment. PFAS is shorthand for per- and polyfluoroalkyl substances, a category of manufactured chemicals that repel water and grease and are found in products such as nonstick pans and food packaging.

In Alaska, PFAS from fire suppressant foams ended up in wells near airports and military facilities. Now, residents in these communities are getting state-supplied bottled water delivered.

But earlier this year the Dunleavy administration rolled back the state’s drinking water standard. It did this by regulating just two PFAS compounds — rather than five — when deciding whether water exceeds PFAS levels considered safe to drink.

Samples taken this summer in communities around Bristol Bay, Yakutat, Gustavus, and Fairbanks were tested for just the two compounds — PFOS and PFOA — listed in the EPA’s action plan.

Now, the Department of Environmental Conservation is changing course again: it will re-examine these samples and screen for more PFAS compounds — 18 in all — as per federal guidelines.

“We’re paying attention to where the impacts are to Alaskans and to the drinking water Alaskans have,” DEC Commissioner Jason Brune told CoastAlaska on Monday. “We will continue to stay on top of this issue and are committed to, as new information presents itself, to adapting and evolving our policies as well.”

“It restores something that had been in place before the Dunleavy administration came into office,” Miller said.

In late August, the Gustavus PFAS Action Coalition’s Kelly McLaughlin had written to DEC asking for this change.

“I do feel a little bit hopeful,” McLaughlin said. “I wonder if the state is finally realizing that we’re really behind and that being really behind is not a good place to be.”

It’s only an incremental policy change. DEC will still only regulate two of the PFAS compounds. But if the state’s policy shifts again, it will have more complete testing data to work with.

The Dunleavy administration’s PFAS response earlier this year was controversial then as it is now.

As of earlier this month, both had left the administration. Days later the PFAS rule changed. Brune says don’t read too much into that.

“People can point to specific folks leaving, but it wasn’t that,” he said. “It was us just learning the issue and getting up to speed on it. And we’re now at the point where we’re testing exactly in line with EPA.”

Some legislators had been critical of DEC’s rollback of drinking water standards related to PFAS.

Brune says now he’d mistakenly misled lawmakers at a hearing when he argued that more limited testing was a cost-saving measure.

“The message that had been given to me was that the testing was more expensive,” he said. “And it would take more staff input to analyze those. And I said that on the record when I was before the legislature, the testing, the cost for the tests, I have since been told is effectively the same.”

The legislature added an additional $9.4 million in DEC’s budget for PFAS response. Brune says his agency is still evaluating how it will spend the money.