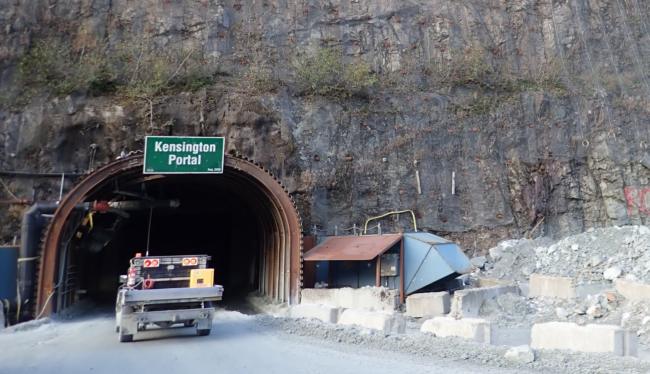 A mine vehicle enters the Kensington Portal on Oct. 15, 2019. (Photo by Jacob Resneck/CoastAlaska)

As originally written, the Juneau Assembly’s emergency resolution would institute a mandatory 14-day quarantine for anyone arriving from out-of-state or a community with confirmed coronavirus cases.

“The mandated quarantine is problematic for business,” Mike Satre of Hecla Greens Creek Mine told the Assembly on Sunday. “We have many of our workers who come from throughout Alaska as well as Outside.”

He penned a letter on behalf of the mine seeking an exemption as a “critical industry.”

Coeur Alaska – which operates Kensington Mine – also warned that the quarantine would impact its 383-person operation as the company brings in out-of-state workers who work in two-week shifts.

“Passage of any resolutions restricting the ability of our workforce to travel to and/or work at the mine would have severe unintended consequences for operations,” Kensington’s General Manager Mark Kiessling wrote in a letter to elected officials.

The Assembly heard these concerns. And acted. By a one-vote margin it added exemptions to the final resolution using the federal government’s guidance on “essential critical infrastructure workers.”

Dr. Steven Greer divides his time between Oregon and Juneau. He flew into town last Wednesday so it’ll be about a week before he can start seeing patients. And he says he’s not going back to Oregon any time soon.

“I told my wife goodbye and said, ‘I’ll see you down the road when all this is over,'” he told CoastAlaska by phone on Monday. “I can’t travel anymore because every time I travel, I’d have to go into quarantine.”

He’s among several doctors that penned a letter to Assembly members urging them to rethink exempting industries.

“My recommendation is if the miners want to work, that they should come up and stay and not go back south until this thing is over,” he added.

Already one of the mines has reversed itself. On Monday, Greens Creek sent a memo to its workforce saying everyone arriving into Juneau to work would first be quarantined for 14 days at a local hotel. The mine is moving to a 28-day shift to accommodate the change.

A spokesperson for Coeur Alaska says Kensington Mine is considering “other options” including moving to longer shifts.

In a statement, Bartlett Regional Hospital’s CEO Chuck Bill wrote that, “for the public good the travel quarantine needs to be as restrictive as possible for the time being.”

That’s what hospital doctors have been saying.

“We have a disaster coming and it’s like we’re watching the tsunami come,” said Dr. Joanne Gartenberg, who runs Bartlett’s behavioral health section. “But this time, we can actually mitigate the tsunami — we can make choices.”

She says the only effective way to slow the spread of coronavirus is to not travel. One of the physicians in her section had been commuting from Arizona where he has a wife and young son.

“And he’s really facing being separated (from) his family now for for several months, really — it’s a really difficult choice,” she said. “But he made the right choice because he wants to protect Juneau, wants to protect himself and he wants to be here to be able to treat our population.”

It isn’t clear what other exempted industries will continue to function. The federal guidelines give broad latitude to the fishing industry, government workers, the energy sector and others.

Marijuana business owners had appealed to the Juneau Assembly for an exemption as well. That’s because federal prohibition on mailing cannabis requires individuals to courier product within the state. But cannabis suppliers aren’t included in the federal exemptions for critical businesses nor did the Assembly add them.