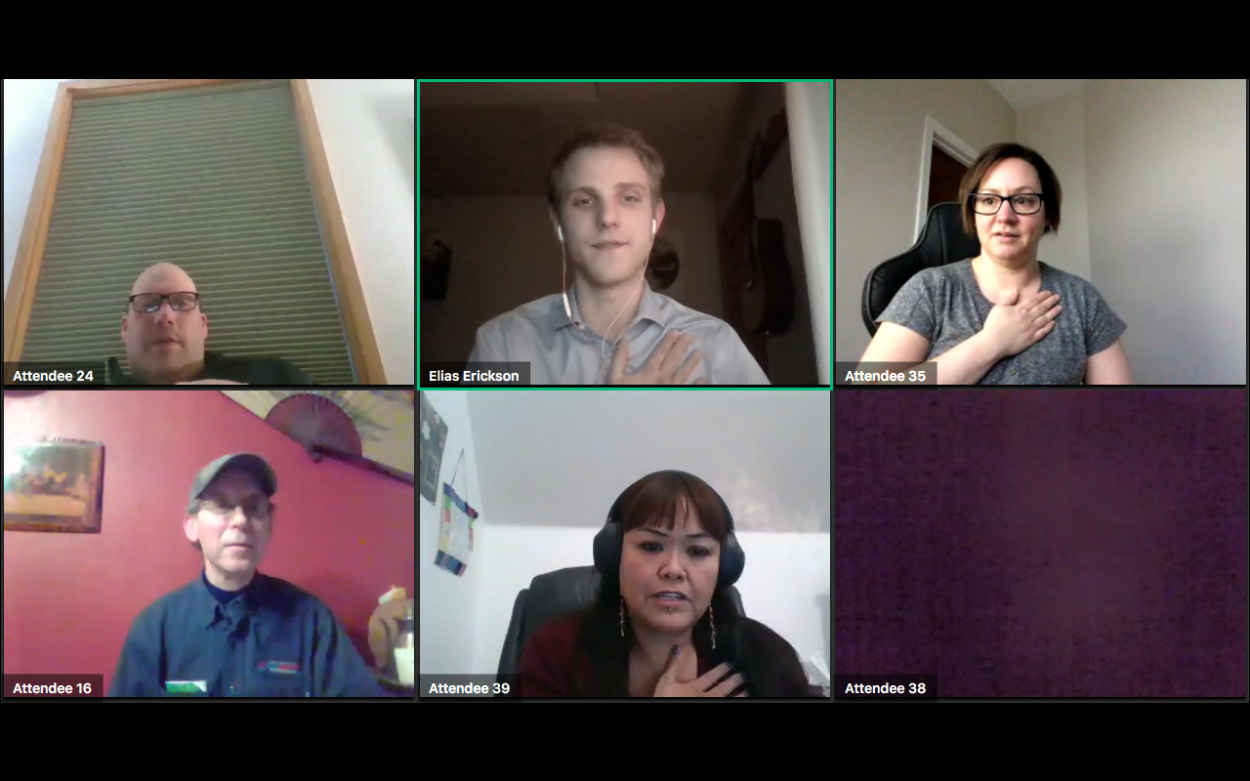 Sitka School Board members (clockwise from top left) Paul Rioux, Elias Erickson, Amy Morrison, Dionne Brady-Howard, and Eric VanCise recite the Pledge of Allegiance at the start of Thursday’s special meeting. Although the board postponed hiring an interim superintendent, it learned a lot about the remote meeting application GoToMeeting. The board will switch to Zoom for the meeting on March 30. (KCAW image)

The Sitka School Board has postponed its selection of an interim superintendent until Monday evening, March 30.

The board met in special session on Wednesday, March 26, but couldn’t arrive at a decision on who will take over for Superintendent Mary Wegner after June 30 — and serve for up to a year until a permanent replacement is found.

Note: The Sitka School Board will meet in special session at 6:30 P.M. Monday, March 30, using the Zoom application. You can find a link to join the meeting on the school district’s website.

After a 90-minute session behind closed doors, the board returned to open session, and board president Elias Erickson said that two of the four people who had shown interest in the job had withdrawn their names. He said the board felt that it was appropriate to delay making a choice a little longer.

We just simply need a little more time to interview those applicants ourselves and ask them a couple of specific questions. And this is one-hundred percent because the board wants to make the most well-thought out, weighed, and balanced decision that we possibly can in moving forward. I don’t know if board members had anything they wanted to add, but we just want you to know that we support you through this time, in that we are trying to do the best work that we can as a board. I wish that could look smoother. I wish it were easier, without so many technical difficulties associated with it. But we’re still meeting virtually right here because we have work to do. And we intend to finish this out and make sure that we’re doing the best we can for you guys.

The “technical difficulties” Erickson referred to involved the remote meeting software, GoToMeeting. The board chose the program because it allows up to 250 people to join a meeting. But it proved buggy, and the sound quality was less than ideal. For the meeting on March 30, the board will switch to Zoom.

About 30 people logged in to the Wednesday special meeting, but none had a chance to speak. The board passed the motion to postpone, with no public comment.

The move irked some in attendance. Teacher Tim Pike has been critical of the board’s pace and lack of community input in selecting an interim replacement for Wegner. He thought the board violated its own policy by not taking public comment. Pike emailed KCAW testimony that he would have like to have said during the meeting, had he the chance.

“This position of interim superintendent is too important to the community of Sitka for the process to be what it has been so far,” Pike wrote. “And it is not fair to whomever they ultimately choose. That individual deserves, and frankly needs, to be seen as the choice of the community as I believe they will be making difficult and controversial decisions that will affect education in Sitka for some time to come.”

Board member Amy Morrison also questioned the lack of public testimony on the motion to postpone. KCAW spoke with the board’s parliamentarian, Superintendent Wegner, who said that a motion to postpone is not considered taking action, hence public comment was not necessary. Sitka Education Association president Roxann Gagner notified KCAW that the union had sent two letters to the board expressing its concerns over the superintendent hiring process so far, and had yet to receive a response.