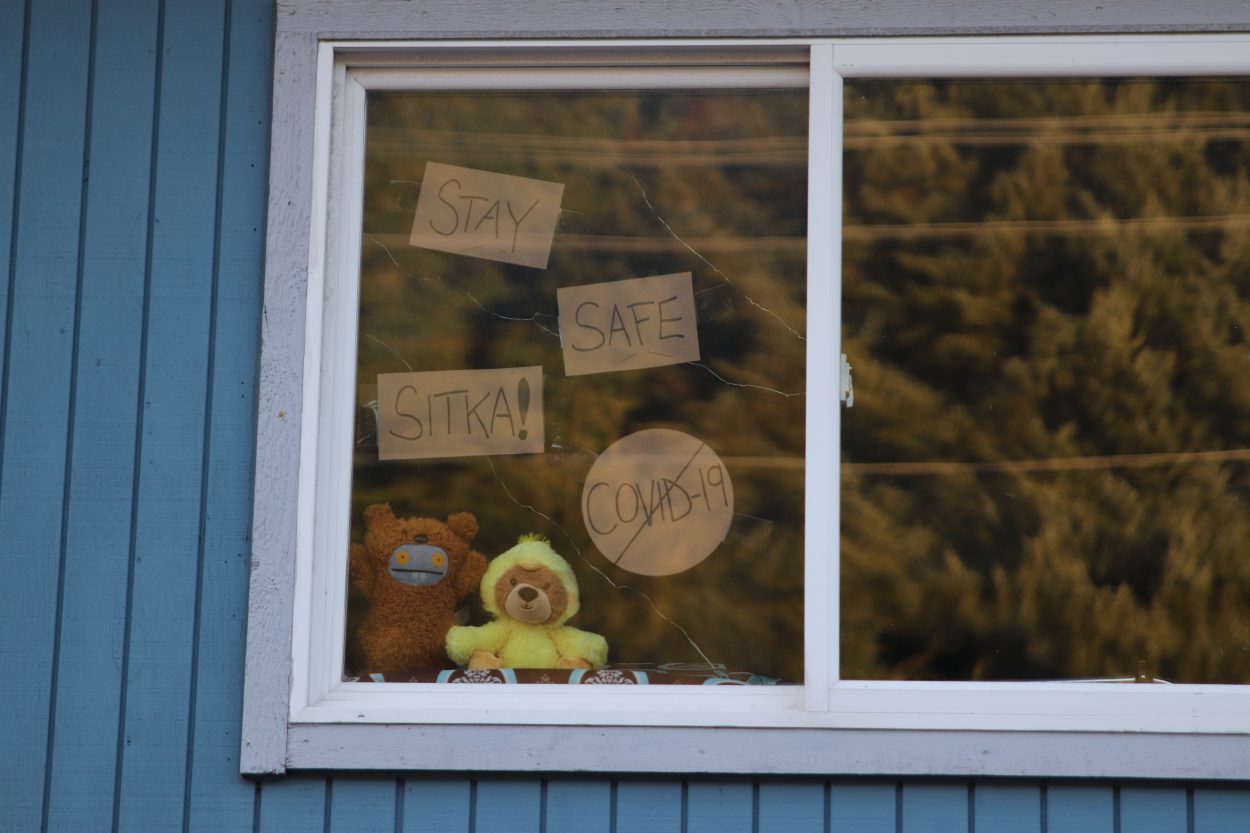 A teddy bear and an Ugly Doll disguised as a teddy bear pose for a photo. (KCAW/Rose)

Hunting season is open — for teddy bears. In Anchorage, Juneau, and Sitka, folks are putting bears in their windows, providing a welcome distraction for parents adjusting to new routines — and a lot more time with their children —  during the coronavirus pandemic.

“Does she have a bear?” Maisie asks.

“Let’s see,” Jo responds “Stop. Look.” They both pause, in silence, looking at the window of a house from the street. “Is that a sheep?” Maisie asks.

DeBell and her daughter are walking around a Sitka neighborhood, hunting for bears. Not the big ones that are just waking up from a long winter’s slumber. The kind you find hibernating in the toy chest. Teddy bears.

“I see a bear!” Maisie exclaims, when she finally spots one in a neighbor’s window.

“That’s one, DeBell says. “Let’s count all the bears we can find!”

Usually, Maisie spends time with her grandmas throughout the week, but now that social distancing is the new norm her mom is working from home, and they’re having a lot more mother-daughter time.

“We do a lot of arts and crafts. We’ve had the Play Doh just living on the table. Trying to do something new every day, but we’re kind of running out of arts supplies and instruments,” she says.

So when teddy bear hunting came along, it was a welcome distraction. In the last week, bear hunts have cropped up all over the state, likely inspired by the 1989 Michael Rosen book, “We’re Going on a Bear Hunt.” Participants put a teddy bear in a street-facing window of their home. Then families can go hunting for them. They’re hunting for bears in Anchorage, Juneau- in Kodiak they’re sharing rainbows in windows, though, inspired by a movement that started in Italy. 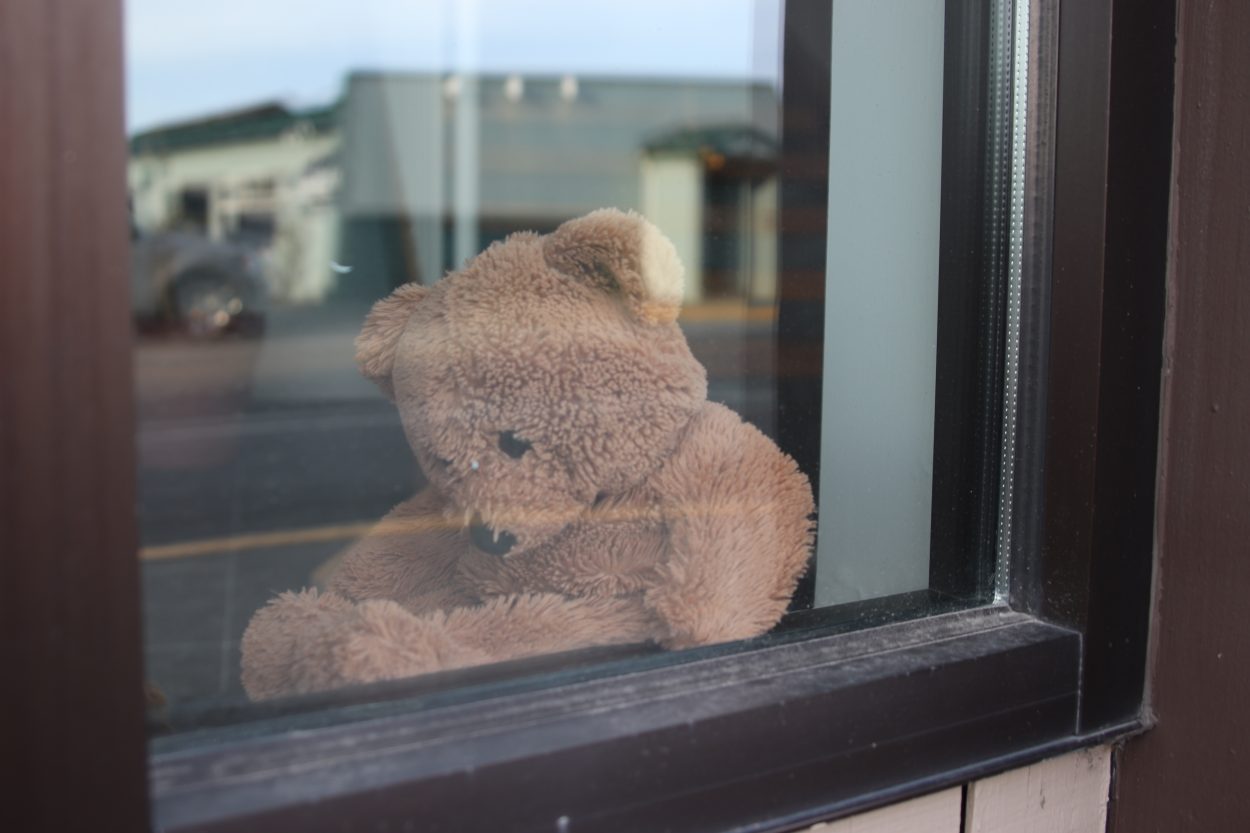 This teddy bear may look a little lonely, but he’s one of over 200 stuffed animals you can find in Sitka’s teddy bear hunt. (KCAW/Rose)

Tatiana Perkins is an admin for the Facebook Group “Sitka Teddy Bear Hunt.” Her cousin created the group after she saw bear hunts were trending all over the country. Overnight, over 50 Sitkans put bears in their windows. Perkins says it’s a testament to Sitkans’ resiliency.

“Even during this time where there’s such high levels of stress, and anxiety, and uncertainty, we can kind of break away from those feelings, and really focus on some cheer,” she says. “Just at my house alone, my six-year-old has been running to the window, ‘Oh look, there’s another car,’ and they stop to come check our our bear, and he waves. It just brings so much happiness to our house alone, and to the community itself.”

There’s a map with pins of the different bear locations. This week, that map is full of blue pins. There are over 200 households participating.

But some things still needed to be clarified. Originally the group was called Sitka Bear Hunt, but there was a little confusion and concern from folks who weren’t in the loop yet, Perkins says.

“I could easily see, you know, we’re so unique, we live in Alaska and there are real-life bears out there, and they’re starting to wake up out of hibernation. There’s already been some real-life bear sightings,” she says. But this is strictly a ‘teddy bear’ hunt.”

DeBell says the activity is welcome, it’s been hard to teach her daughter Maisie what’s going on.

“She doesn’t understand that she can’t go see her friends or her cousins. She says ‘I just want to hug everybody,”’ says DeBell. “We’ve told her that there is a bad cold going around and we need to keep everybody clean. So she’s getting really good at washing her hands and singing ‘Happy Birthday.’ And she understands that we all need to stay really clean. But yeah, she’s kind of turning into a little weirdo without socialization,” Debell said, laughing.

Maisie loves hunting for the teddy bears, and particularly loves the bear displayed from their neighbor’s boat. DeBell says the hunt gives her a boost as well.

“This is really hard. I’m a teacher and so I see people every single day, and I didn’t realize how much I would miss that. It’s very challenging,” she says. “So having this bear hunt and having people, even though we don’t talk to each other, but a little bit of…you know…a wave from a neighbor, it’s really nice. And it’s a reason to get out of the house, which is also really nice.”

So if you want to go on a bear hunt in Sitka, you don’t need a permit or any special gear. Just walk down the street- it’s a quick reminder that you’re not alone. 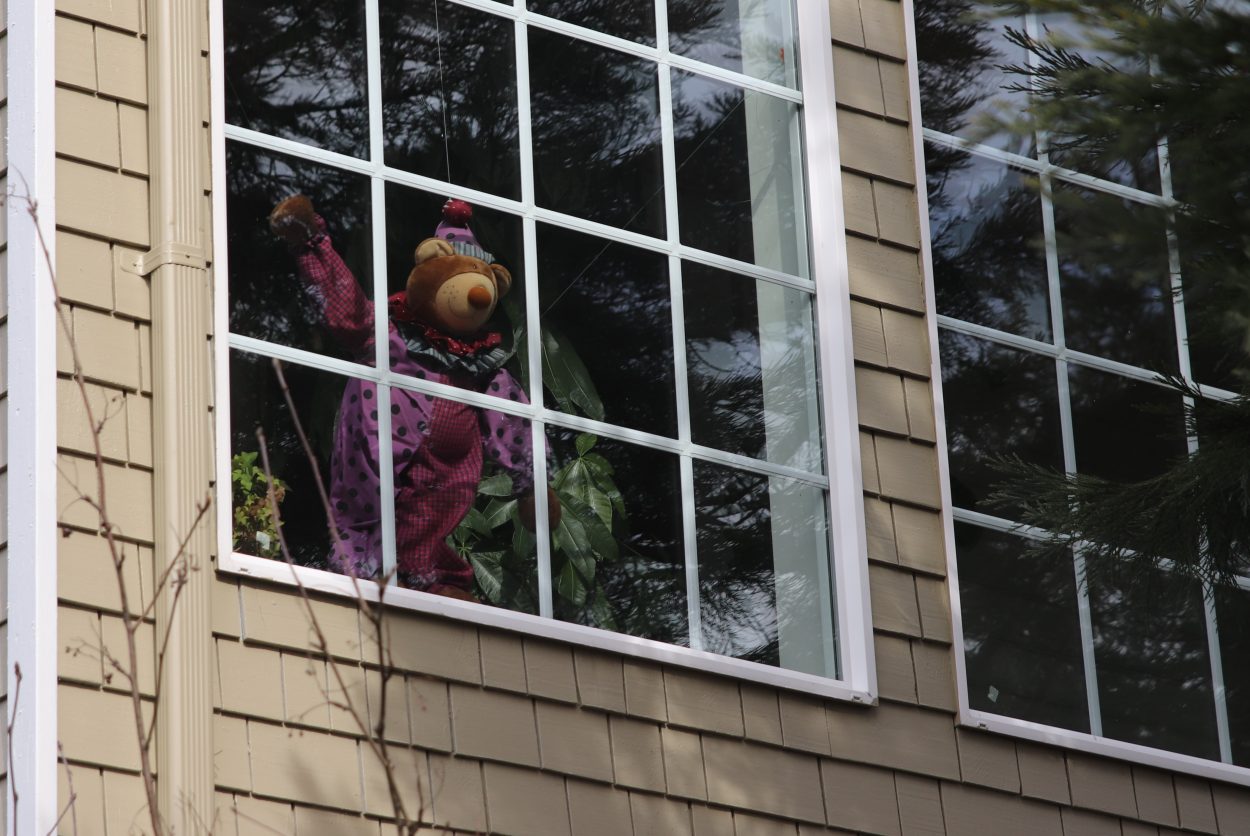