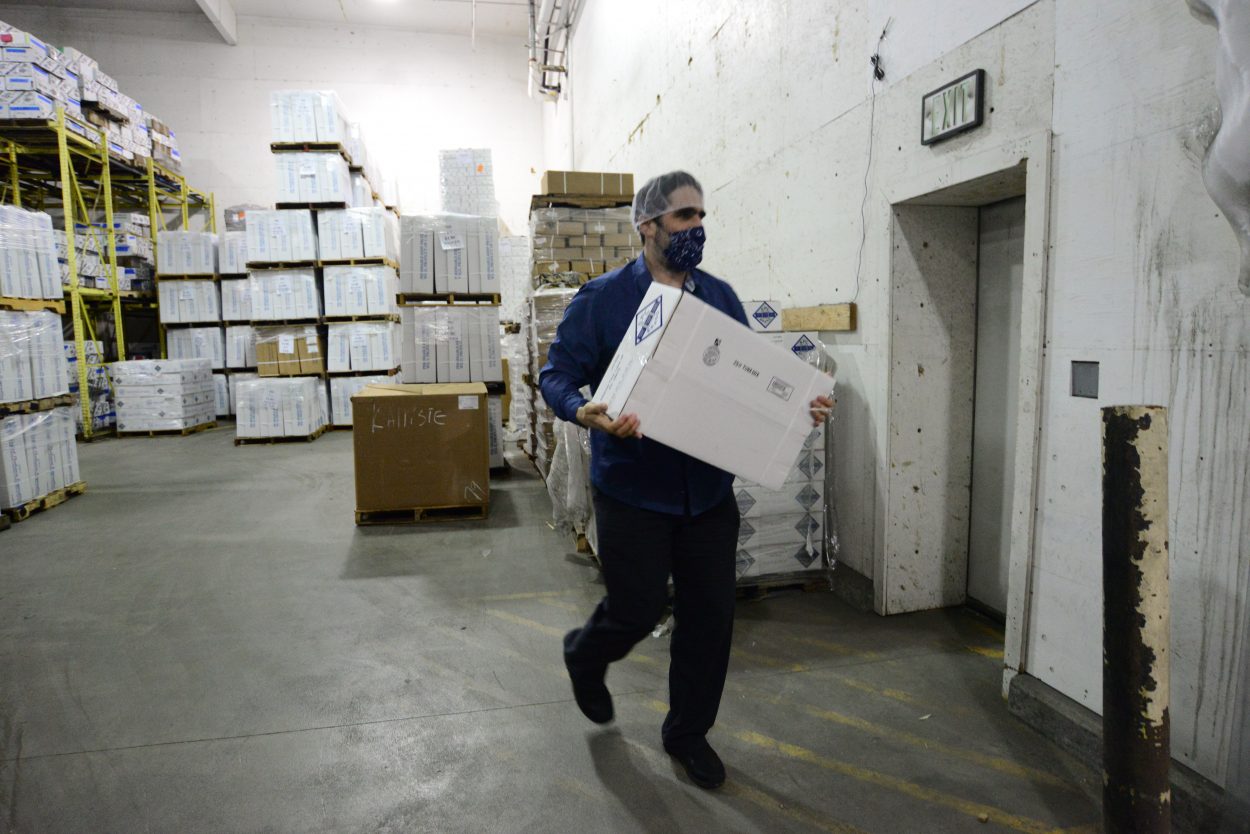 Processors like Seafood Producer’s Cooperative in Sitka are caught between the fishing season and a virus. Under a new emergency order, processors and other businesses that employ seasonal workers must require those employees arriving to Sitka to quarantine for 14 days. Pictured: SPC Executive director Stephen Rhoads personally loads a box of seafood for a local donation program. (KCAW Photo/Berett Wilber)

The Sitka Assembly has passed a controversial ordinance that would place tight restrictions on seasonal workers coming to Sitka — tighter, in fact, than already required under a mandate from the governor. And while most on the assembly believe tough rules are necessary right now, there is concern over whether the city might be overstepping its bounds, and facing a legal challenge from state government.

As the summer season nears, communities across Southeast are trying to figure out how to handle an influx of seasonal workers from the Lower 48. At it’s last regular meeting (4-14-20) the Sitka Assembly unanimously passed an ordinance that puts more restrictions on those who could soon be arriving in Sitka to work in the seafood industry.

The ordinance requires all essential workers traveling to Sitka, with the exception of critical healthcare workers, to quarantine for 14 days once they arrive. And any businesses bringing in employees must submit a plan to the municipal administrator detailing how they’ll continue operating during the coronavirus pandemic without jeopardizing public health.

If this sounds familiar, Gov. Mike Dunleavy last month ordered businesses to do essentially the same thing. However, so far the state hasn’t released any of the draft mitigation plans to the public or to cities, said Sitka’s administrator John Leach.

But is it legal? The state has given smaller towns with limited medical facilities the authority to create stricter barriers to entry. But as the assembly in Wrangell recently considered a mandatory quarantine, the state intervened. Wrangell, with a population of around 2,400 is considered a hub town, with a medical center, and therefore too big to impose its own rules, according to the state. The Wrangell assembly voted the mandatory quarantine down, wary of risking legal action down the line.

Sitka municipal attorney Brian Hanson wasn’t sure how Sitka would fare if the state challenged its ordinance. State health mandates, in theory, legally supersede any city laws. Hanson said he’d been doing a lot of research, and thought the city could have the authority to enforce its own restrictions.

“We may have our own authority,” Hanson said, “but it’s undecided on whether or not we could withstand a challenge from the state as to who has the superseding authority here.”

“I think what we’re doing is an overstepping of bounds,” said assembly member Valorie Nelson. “I know people are afraid, and I know it’s a pandemic, but I told you before, I’ve survived measles, mumps, chicken pox, I survived cancer. I’m considered at risk because I have a compromised immune system. But I am responsible for my own self.”

Member Thor Christianson said if the state had followed through, reviewing businesses plans and releasing them to cities for review, the assembly wouldn’t have to do this.

“I’m not particularly worried about the state saying ‘You’re overstepping your bounds,’ because if they were doing their jobs, we wouldn’t have to do it,” Christianson said.

As of April 14, Sitka still had no confirmed cases of the coronavirus. SEARHC chief medical officer Dr. Elliot Bruhl spoke to the assembly, saying even though the levels were low in Southeast, that didn’t mean Sitkans should rest easy.

“We’ve performed over 450 tests in the last six weeks and we’ve detected very low levels here in Southeast Alaska. That’s a wonderful thing. It’s also, I think, lulled us into a false sense of security,” Bruhl said. “The idea of bringing many hundreds of people into town from the lower 48 or other areas where the virus is circulating, necessitates significant caution.”

Bruhl had recently penned a letter to the state calling on it to disallow local seafood processor Silver Bay Seafoods’ plan to bring around 450 workers to Sitka.

During public comment on the ordinance, Silver Bay CEO Cora Campbell said the processor would work with the city, and as part of their plan, would screen and require workers to quarantine from home before they travel to Sitka. And once they arrive at Silver Bay’s campus, they’d likely stay there for the duration of the summer.

“We’ll have a closed campus this summer with strict enforcement,” she said. “And we will have medical services available to us at the plant to address any issues that come up. We understand that the community healthcare capacity in Sitka is limited and it needs to be reserved for the residents that you’re there to serve.”

The city published the most recent draft of Silver Bay’s mitigation plan on Tuesday (4-14-20).  Read the plan here.

During public comment, representatives from other seafood processors, lodges and charter businesses spoke up. Several voiced concern that the ordinance was too strict in its timeline, and would make it hard for them to get their seasons started.

But several residents asked for the assembly to pass the ordinance, and some wanted them to go even further. Here’s municipal clerk Sara Peterson reading a comment from Steve Ramp.

“This ordinance is a great step forward in further protecting our health in Sitka, and I strongly encourage the assembly to pass it regardless of what the state has recently told the community of Wrangell,” Ramp wrote. “Unfortunately I think the ordinance still comes up short and believe all persons arriving in Sitka, employed or not, should be required to submit the protection plan.”

Ultimately the ordinance passed unanimously. It will end when State Health Mandate 10, which requires everyone traveling to Alaska to quarantine for 14 days, is lifted.