Covid relief could aid Sitka schools budget — or not 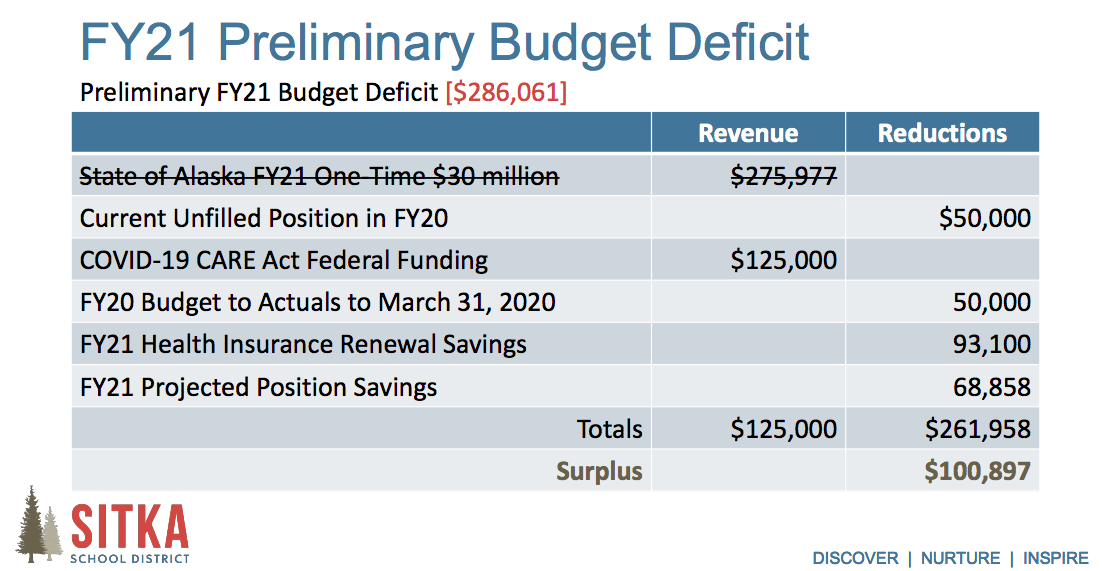 Although the governor’s $30 million veto is a loss, it’s not a disaster. Covid relief funds may make up some of the difference, along with overall savings from not having school in session this spring. (SSD image capture)

The governor’s decision to veto $30 million dollars in state education funding has left school districts in a quandary: How much — if any — of that funding will be replaced by federal relief funding for the coronavirus pandemic?

As KCAW’s Robert Woolsey reports, the governor’s controversial plan has left the Sitka school district playing a guessing game about its finances next year.

School funding year-to-year is always a guessing game, but it typically depends on the legislature, and whether schools will see an increase in funding, or be held flat.

The state has never cut education funding before, and no governor has ever vetoed it, until now.

But Gov. Dunleavy told reporters on April 7 that he had a strategy to save the state money, using funds intended for coronavirus relief.

So you’re going to see a number of vetoes, the vast majority of those vetoes, that state money that we vetoed will be replaced with federal money with the approach to deal with the virus: The CARES Act (Coronavirus Aid, Relief, and Economic Security Act). So when it comes to reductions — for example there was a $30 million veto on UGF (unassigned general funds) which we did (I did) there’s money in the CARES Act for education, for that replacement.

The CARES Act does have an education provision intended to help schools beef up their technology infrastructure and teacher training to deliver distance learning. For school administrators, it’s a big question mark. At a Sitka School Board work session on April 9, board member Paul Rioux asked Sitka district business manager Cassee Olin about it.

Rioux – On the Covid CARES Act, how sure are we, and when might we know more on that one?

Olin – Ummm… I would probably say I’m about 75-percent on that. And the reason being is that it follows a formula like Secure Rural Schools. So what happens is that this funding goes from the feds to the state, and the state can take a chunk off — and how much of that chunk, none of us know. It can be anywhere from 5-percent to 10-percent to 25-percent. They could take out money for the virtual school, they could take out anything that they need at their Covid (response) level.

On paper, this is not a disaster. On April 9, Gov. Dunleavy extended Alaska’s school closure through the end of the school year — a savings of about $50,000 in utilities, substitute teachers, and paraprofessionals. Retirements have created two open positions that won’t be filled next year, and the district is getting another major break on health insurance premiums ($93,100). The bottom line as of the April 9 work session put the district $100,000 in surplus.

Having undergone major budget-cutting in recent years, the board was in the unusual position of putting something back. In a survey conducted over the winter called “Leave Your Print,” respondents favored restoring full-time counselors at both Pacific High and Blatchley Middle School.

Board member Eric Van Cise said that Sitkans had indicated a clear preference.

“I see that the mental health positions, both at Blatchley and Pacific High School — I just see those as absolutely critical,” Van Cise said. “Like, first priority.”

The other priorities in the Leave Your Print survey were to reinstate a full-time PE teacher at Blatchley (which would free the counselor there — who currently teaches two periods of PE — to work full-time), and to trade one of Sitka High’s two tech teachers for library support and 6th grade tech at Blatchley.

Those moves would be costly, however, and far exceed the $100,000 in surplus funds.

The administration recommended a more cautious approach: Putting $50,000 in savings, and dividing the other half between a superintendent search ($25,000) and an increase to Community Schools ($25,000).

Since the April 9 meeting was only a work session, nothing came down to a vote. But the stage was set for some difficult choices. Board member Dionne Brady-Howard cautioned that when budgeting in a pandemic, it was important to think beyond the numbers.

“I know that we can’t possibly plan that far ahead,” said Brady-Howard, “but one of the things I would want to know through all this is that we have some flexibility to adjust if we find ourselves still in this situation in the fall, as far as not delivering education on site.”

Superintendent Mary Wegner responded that the district was thinking ahead, and considering “the possibility of a slow start-up in the fall,” with classes ramping up, rather than having everyone return on the same day.

The Sitka School Board must submit a final budget to the City of Sitka by the end of April.