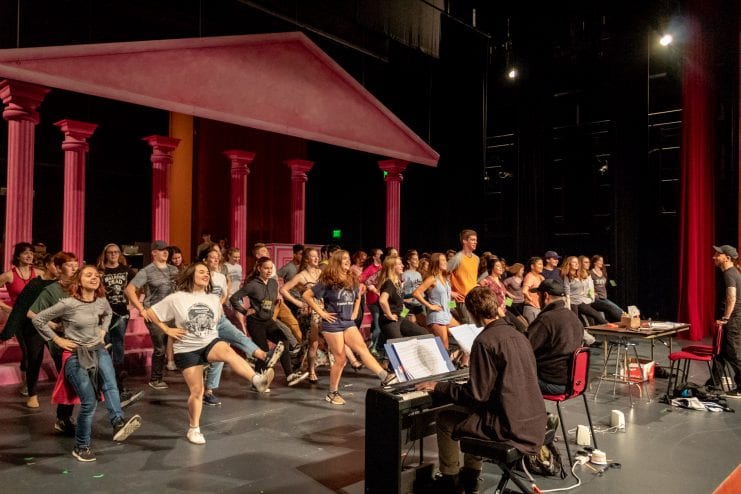 Students at the Sitka Fine Arts Camp rehearse in 2018. The camp has no plans to offer courses online this summer. Says director Roger Schmidt, “Our entire business is based on the opposite of social distancing.” (KCAW file photo)

Summer in Sitka just got a lot quieter. Both the Sitka Summer Music Festival and the Sitka Fine Arts Camp have announced that they are cancelling their public programs for the summer. And while the Fine Arts Camp will go on hold and regroup for the 2021 season, the Music Festival is creating a virtual performance model it hopes will eventually take chamber music across the state.

There are some unhappy campers right now — almost 1,000 in fact. That’s how many students attend the Sitka Fine Arts Camp programs beginning in June.

Executive director Roger Schmidt says it was his board’s unanimous decision to close the camp to prevent the spread of the coronavirus in Sitka.

“You know we’d love to have made wrong call,” he said. “But we feel a real responsibility to the community of Sitka, that has limited medical facilities. We feel a real commitment to the safety of our students and staff that come from throughout Alaska, the country, and the world. We want to keep Sitka safe, and we want to keep the communities that our students and staff return to safe as well.”

And it’s a full closure at the camp. Along with the elementary, middle, and high school camps, the organization is cancelling its full suite of smaller programs, performances, and fundraisers. A Night of One Acts (May 1-3) is gone, so is Lake and Lyndale (May 23), Karen Neal Concert (June 5), Jazz on the Waterfront (June 27), and the musical theater production (July 24, 25).

For many students in school right now, education has moved online. Schmidt says that really isn’t an option for the Sitka Fine Arts Camp.

“Our entire business is based on the opposite of social distancing,” said Schmidt. “We’re about concert halls, improv groups, kids working closely together. We’re about events, and we just lost all our business. So our entire income stream dried up. We had to close the Hames Center; we had a really vibrant event business on campus — weddings, conferences, meeting groups. Those all cancelled immediately. So right now the majority of our staff are furloughed. So right now we’re working hard on closing down the campus, keeping our heads above water, and getting information out to people. I’m sure we’ll do some stuff down the line, but we’re a pretty skeleton crew right now.”

The Sitka Summer Music Festival won’t be filling Harrigan Centennial Hall with appreciative concert-goers this June. But artistic director Zuill Bailey says musicians will still perform virtually, for both patrons and the public. The video above is a violin-cello duet called “Natalia” by Antonio Lauro, both parts played remotely by Bailey’s student Chris Beroes-Haigis (cello) and Leonardo Pineda (violin) and digitally-merged. Bailey says the festival is poised to do more remote concerts from artists performing remotely from their homes.

Bailey says that the festival had already been moving toward more virtual education and performance in the next 3 or 4 years. The coronavirus is simply speeding up the timeline.

“As scared as I am at what is happening in the capacity of a personal career that I’ve known specifically for 30-plus years,” said Bailey,  “I am equally invigorated to be collaborating with such an amazing organization that is so in the right place for this to happen.”

The festival’s headquarters at Stevenson Hall on the historic Sheldon Jackson Campus is in the middle of a $4 million remodel. Once finished next year, it will have modern functionality for delivering classical music — either in person, or online — across Alaska.

“So now that the focus is that, inside our state-of-the-art building,” said Bailey. “The tour we’ve always done, and that should be very easy to come back to when the world is ready for getting large communities together for public concerts.”

The festival’s International Cello Seminar is still on the calendar for the end of July. Bailey resides in El Paso, Texas, but he’s only there about 50 days in a typical year. In this very atypical year, Bailey says he hopes to make the jump to Sitka as soon as he can when travel restrictions are lifted, and perform on the porch of Stevenson Hall for an audience on the Sheldon Jackson Quad — even if everyone’s six feet apart.