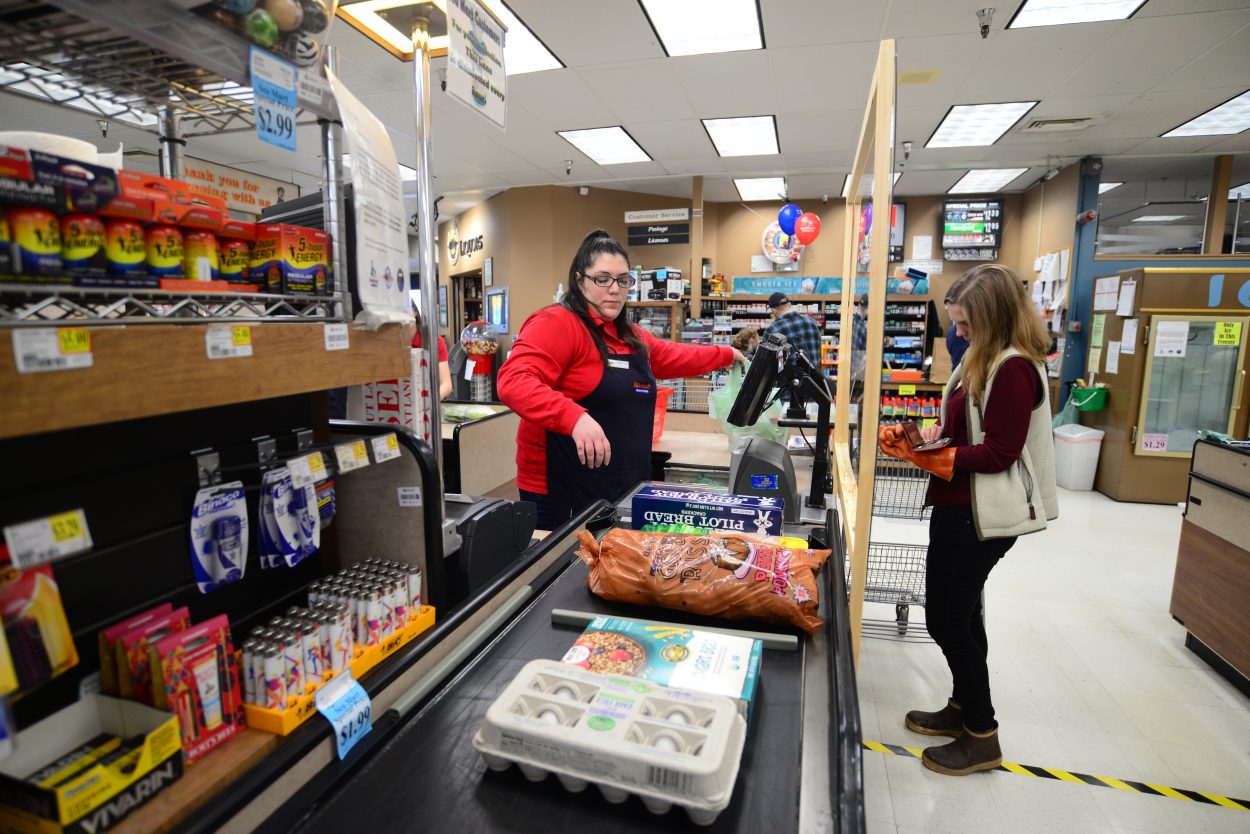 Cough guards are up in Sitka’s grocery stores, but with no confirmed cases or community spread most shoppers aren’t wearing masks. Social scientists want to understand how Sitkans perceive risk. (KCAW photo/Berett Wilber)

The longer that relatively isolated communities like Sitka go with few or no cases of the coronavirus, the less threatened they feel by the infection — or not. Social scientists are beginning to wonder what factors inform our perception of risk over the course of a pandemic, and — ultimately — how our perception of risk informs policy decisions for the community.

The Sitka Sound Science Center has published a new survey to find out what you’re thinking.

Ron Heintz is the director of research at the Sitka Sound Science Center. The center has been working hard recently on a landslide warning system, but now it’s pivoted to the coronavirus. Like the rest of us, they’re trying to make the best of a less-than-ideal situation.

“We’re all at home now, because of the pandemic,” he said. “But we wanted to try and get a sense of what’s happening in the community — in Sitka — with respect to people’s impressions of how well they’ve been informed, and how prepared they feel they are for the pandemic, what they’re response is and how they’re preparing for it.”

The Science Center was already partnered with the RAND Corporation (along with the US Geological Survey and the University of Oregon) on the $2 million landslide warning system — and a major component of that project is social science, especially the question of how people perceive and respond to risk. That project isn’t going away; Heintz says that everyone’s nerdy science instinct has just been redirected into developing a survey.

“We’re trying to get a sense of the risk of exposure they feel to the pandemic,” he said. “How they’re going about preparing for that risk, and we’re also interested in how well informed they feel about that risk, and where they’re getting their information from.”

Heintz says that the survey was developed in partnership with the social science team at Rand. In 6 pages it covers a broad range of risk and responses — literally, everything from how likely you think you are to become infected and die from this infection, to how much subsistence food you’re eating. It takes probably less than 10 minutes to complete online, and prompts you to think just a little harder about actions and precautions that are starting to feel routine.

Heintz lives in Juneau and commutes to Sitka about once a month under normal circumstances. He says his own attitude shifted noticeably when the first cases arrived there.

“In Juneau here, I’d been pretty proactive,” said Heintz. “I’d been following the advance of the virus in Wuhan, and watching the news pretty carefully to see what was going on. In late February I decided I wouldn’t be traveling anymore. And I was being pretty proactive I thought — and then when a case actually developed in Juneau, there was another ramping up of concern on my part. And that’s one of the things we wanted to capture: How people’s impressions change when cases become more local, and the whole situation becomes more real to them.”

Similar surveys are being conducted in other parts of the country, according to Heintz, and the National Science Foundation — which funded the landslide project — is considering throwing its weight behind the effort. People’s behavior changes dramatically based on their perception of risk, and this plays a role as communities — and our state — implement policies like social distancing and shelter-in-place.

“When you realize that you could actually contract it by going to the grocery store or running into somebody on the street,” he said, “suddenly that becomes very different from hearing it on the news and saying ‘Okay, I’m going to be very careful and follow the rules that Dr. Zink (Anne Zink, chief medical officer for the Alaska DHSS) is putting out, and I’ll be okay.’ But once you realize that it’s there in your town, it was a different feeling for me anyway.”

At first, Heintz thought the survey would just sample the views of Sitkans, but he says it has “taken on a life of its own” since it was released about a week ago (4-10-20).  And the initial idea, anyway, was to keep it open until Sitka started seeing its first cases. Now, if the National Science Foundation contributes funding, the goal is to conduct a follow-up survey later in the course of the pandemic. After that, Heintz says the Sitka Sound Science Center will compile the data into a report that should serve as a tool to help policy-makers manage risk in their communities.