Despite a small surplus, Sitka School Board to consider deep cuts at final budget meeting 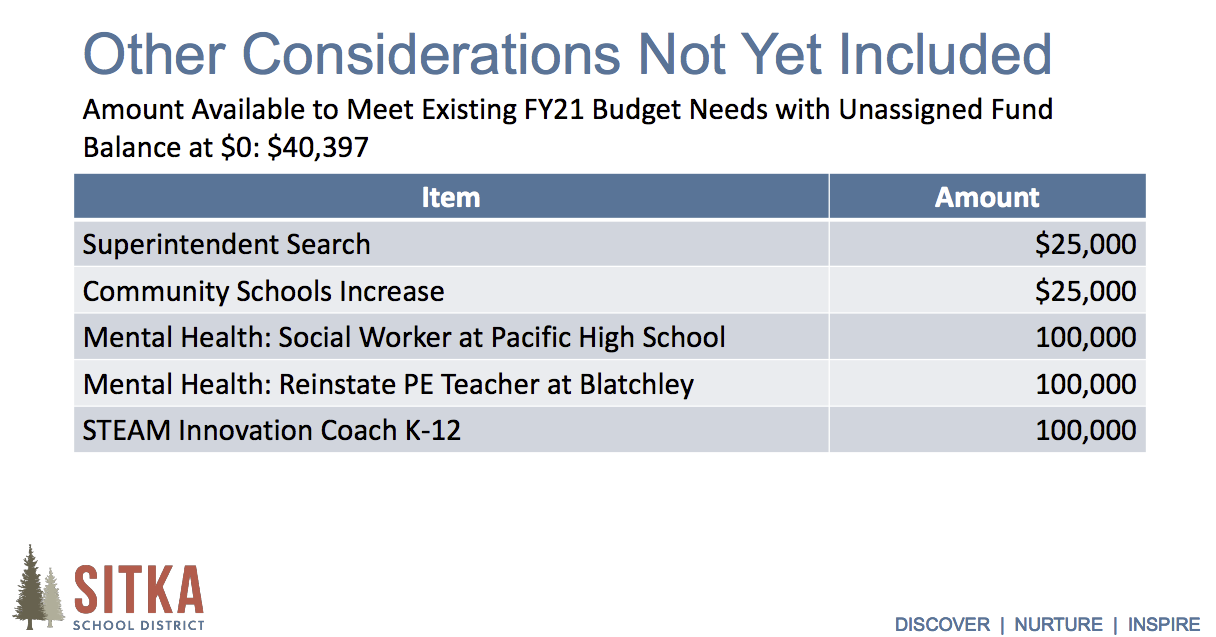 Board president Elias Erickson said he believed the top two items on this list were a priority — but only if the district administration found $200,000 in cuts elsewhere to beef up reserves, and to prepare the district for more hard cuts in the future. (SSD screen capture)

The Sitka School Board will hold its final budget hearing Wednesday night (4-22-20), with at least two members interested in making major program cuts.

But the cuts aren’t in response to a deep deficit. The numbers for next year are actually showing a surplus of just over $40,000. The question is: Should Sitka start making painful decisions now, rather than making them next year, when state and local governments are likely to be even more strapped for cash?

At its last work session on April 16, board president Elias Erickson supported the idea of making cuts now.

“As tough as it is, we’re going to have to be looking at some teacher reductions, whether it’s this year or next year,” said Erickson. “And I would personally rather make this transition gradual rather than not. And so we need to look not just at how we can save money more, but how we can reduce our spending, and minimize the impact to students while doing so.”

Although the district is showing a $40,000 surplus for next year, it’s not exactly flush. There was consensus on the board that the search for a permanent superintendent would take a big bite out of that money — about $25,000 — and leave the district with very little unobligated cash in reserves.

Board member Amy Morrison wasn’t comfortable drawing down district funds to such a low level. She thought major cuts now would give the district some breathing room, and spare everyone a little pain in the future.

“I’m not normally this way,” Morrison said. “I’m not a pessimist, but in the following years it’s just going to be worse and worse. The state is going to be in a dire situation this next year, and the city is going to be also. So I feel like we have to start setting the path for reducing our budget somehow. I hate to say that, and I hate to do it, but I just don’t see how there’s any other way.”

But that didn’t sit well with some in the audience. When the meeting became a public hearing, elementary school music teacher Susan Brant-Ferguson challenged the logic of the board’s thinking.

“The idea of cutting now to make it easier later, while that might make sense in some situations, I don’t think it makes sense in a Sitka School District situation,” she said. “We fund for the year.”

Vocational teacher Tim Pike seconded that idea, arguing that the district had to provide the best education each year with the funding that is available. He said, “You need to deal with the fiscal realities of the year you’re in.”

The board will meet for a public hearing — and to pass a final budget — at 6 P.M. on Wednesday, April 22. A link to join the Zoom teleconference can be found on the school district website.