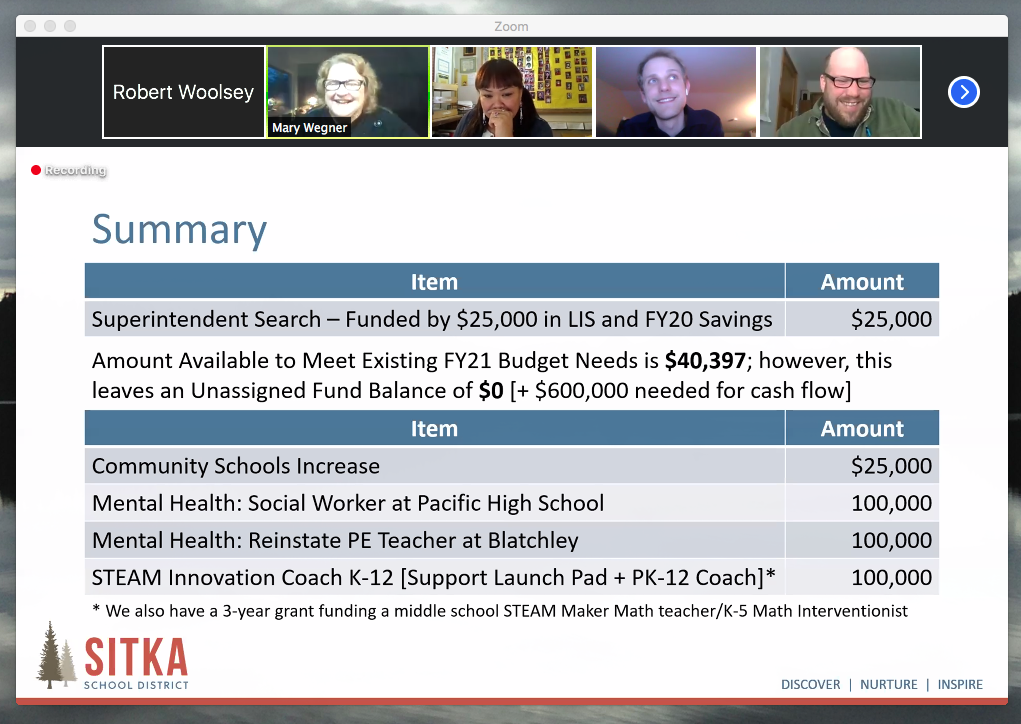 After testimony from the public, the Sitka School Board wasn’t willing to free up $200,000 to create mental health positions (full time counselors at Blatchley and Pacific High). “It seems really hard to cut existing positions to fund new positions,” said board member Amy Morrison. The board decided to spend $25,000 on the search for a new superintendent, but held off increasing the $25,000 contract for Community Schools (currently held by the Hames Center) until a budget adjustment this summer. (KCAW image capture)

The Sitka School Board Wednesday night (4-22-20) passed a $21 million-dollar budget for next year, after agreeing to hold off on any major staff cuts until absolutely necessary.

Last word on the schools  budget, however,  will depend on the Sitka Assembly.

The Sitka School Board wrestled more with possibilities than realities, as it forged a budget for next year.

Once federal Secure Rural Schools funding ($222,000) and Covid Relief ($152,000 deleted from operating budget, to be received as grants) were finally accounted for, the district budget for 2021 was actually ahead by just over $40,000.

But that didn’t stop the board from wanting to explore a more difficult scenario, just to see what it might be facing next year at this time, if the budget had to shrink by around $250,000.

The district office and building principals responded with a list of over $900,000 in possible cuts, with a Keet Gooshi Heen elementary teacher and a Special Ed teacher at the top.

During public testimony at the board’s final budget hearing, Keet principal Casey Demmert made it clear that cutting one of his teachers would not be an easy call.

“That wasn’t a flippant ‘Hey, we can give up a teacher at Keet,’” said Demmert. “Giving up that position would have significant impact on our building and our students, and we would probably give up the Science position, which is part of our state testing, and would tax our teachers heavily with adding Science into their curriculum.”

Kelly Buxton is that Keet Gooshi Heen Science teacher. She didn’t comment on the fact that her position was at the top of the list of hypothetical cuts. Rather, she stressed the value of retaining as many teachers as possible.

“I would just like to request that the board please try to minimize cuts to our staff,” Buxton asked. “I really think that the impact from remote learning and other impacts based on this whole covid situation for parents and teachers has been a lot to handle, and it will definitely impact our students’ learning next year.”

Buxton supported the district’s move toward putting an iPad or a laptop in the hands of every student — the so-called 1:1 Initiative. The initiative is budgeted at around $25,000 next year. Technology director Ian Crane believed it was a good investment.

“Technology’s merely a tool, and the connections that matter in school are teachers,” Crane explained. “But there are ways that technology can actually save money. Similar to what Kelly (Buxton) was saying, in a 1:1 scenario with digital resources replacing books and those costs being lower, there are ways in which moving forward, and not cutting technology too heavily can actually benefit the school fiscally.”

Crane said the savings provided by technology allowed for more human staffing in the buildings, and that to cut technology too far “would be going backward, financially.”

After hearing from the public, the board lost its appetite for exploring the worst-case scenario. Members began to build a consensus on making only a couple of small cuts, in order to keep the $40,000 surplus in reserves.

“I know that it doesn’t give us a lot in reserves,” said board member Brady-Howard, “but trying to hold off on any drastic cuts until they’re absolutely necessary is where I’m at as far as what I’d like to see us do for next year’s budget.”

Member Anne Morrison was one of two board members most interested in learning if large cuts could allow the district to restore counseling positions at Blatchley and Pacific High School. Morrison, and other members, were also interested in bumping up funding for the Community Schools contract with the Hames Center, which was only $25,000 last year.

But Morrison didn’t see any logic in trading out teaching positions to make these things possible.

“It seems really hard to cut existing positions to fund new positions, but I support especially the two counseling positions,” said Morrison. “You know I would love to see those happen, but there just doesn’t seem to be the money anywhere to make those happen. So I would also agree with you guys, and put those at the top of our priority list if we were to get some money. And I would also like to revisit in July or August, when we do our budget revision, to see if there is potential to add money for Community Schools at that time. But I think there are so many unknowns between now and then that I feel more comfortable keeping that $40,000 in reserves for right now.”

In the end, the board made three decisions about the budget: It cut $7,000 for membership in the League of Innovative Schools, and $18,000 in expenses due the closure of schools this spring. And the board chose to spend $25,000 on the search for a new superintendent, while leaving $40,000 in the bank.