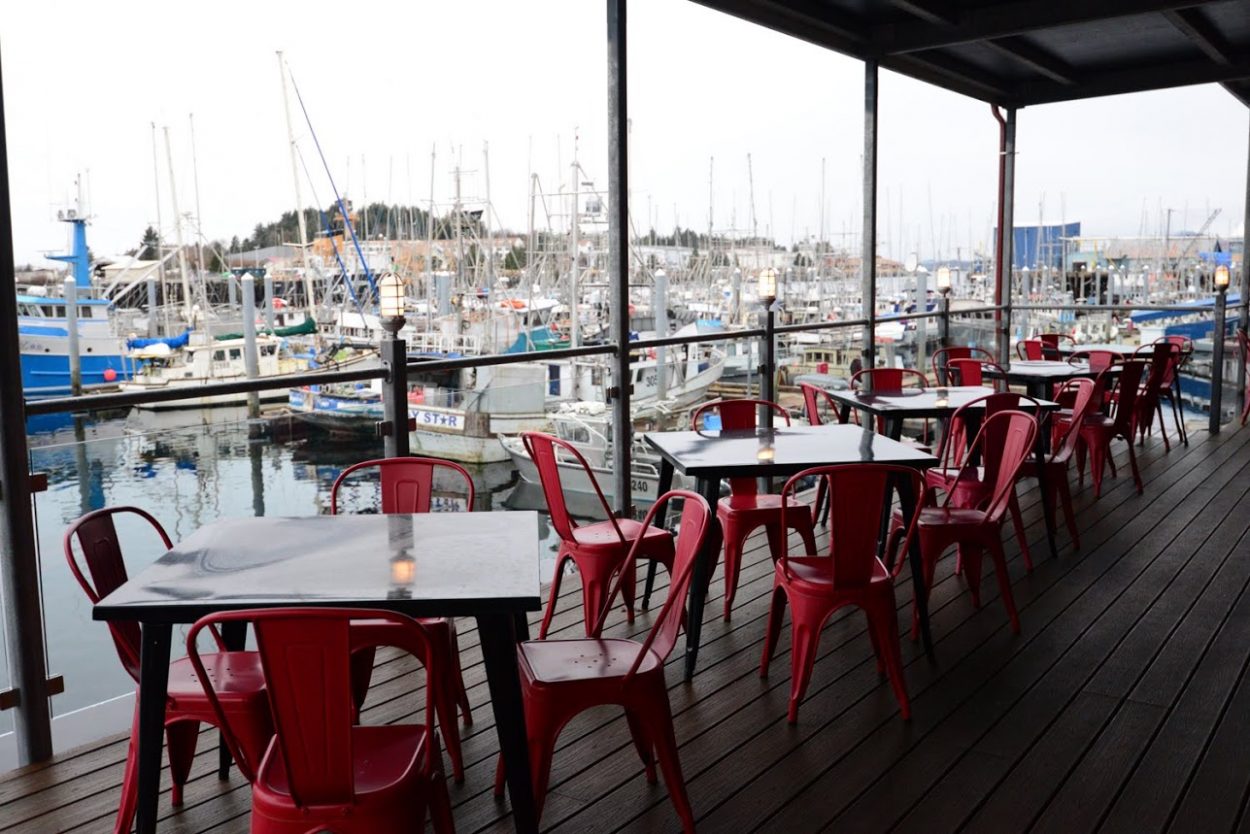 The outside patio of the Mean Queen at Totem Square was empty by 3:30 p.m. Sitka, AK. March 18, 2020, the day that restaurants closed statewide. The state rolled back its mandate Friday (4/24/20) allowing business like restaurants and retail stores to partially open to the public, but Mean Queen owner Mary Magnuson called for the Sitka Assembly to keep the stricter local ‘shelter-in-place’ order in effect until May 12 (KCAW/Berett Wilber)

Governor Mike Dunleavy may be opening the state back up, but Sitka’s hunker down order remains in place, for now.

At an emergency meeting on Thursday (4-23-20), the Sitka Assembly considered rescinding rules that call for Sitkans to shelter-in-place, require everyone arriving to Sitka to quarantine for two weeks, and require businesses to submit protection plans to the city if they’re bringing in employees from outside the community.

The assembly’s local rules, in some places, contradict Governor Mike Dunleavy’s recent health mandate to re-open the economy in phases and relax the ban on some in-state travel.

Under the city’s ‘shelter in place’ rule, which has been extended until May 12, Sitkans must hunker down, and non-critical businesses must remain closed to the public. The list of what counts as a critical business is long, and businesses can request an exception from the city if they aren’t included and still think their business should be considered “critical.”

But state health mandate 16 says that as of Friday, April 24, most businesses, from restaurants to and retail to hair salons and tattoo parlors, can open to the public as long as they limit service to 25 percent customer capacity. And they must adhere to very strict guidelines: All employees must wear fabric face masks, for example, and follow a long list of other social distancing rules. Businesses that open but don’t adhere to these rules could face criminal charges and steep fines.

During public comment before the assembly, nearly a dozen people spoke. Comment was divided on whether the assembly should lift the local rules. Mary Magnuson, who owns the Mean Queen and the Mean Queen at Totem Square, said the governor’s terms for reopening businesses like restaurants weren’t realistic.

“I would urge the assembly to follow along with your mandate of May 12, which we plan on doing anyway because we think that’s what we need to do to keep the community safe,” she said. “There is no restaurant that can operate at a 25 percent capacity. It just isn’t possible. So what we need to do is keep ourselves safe, continue our delivery, our carryout, our curbside, and look at this again on May 12.”

Other business owners and residents implored the assembly to scale back local rules like the mandatory 14-day quarantine for everyone arriving to Sitka, including essential workers, and the submission of  protection plans to the city. The order is tied to the state health mandate 10, which requires everyone traveling to the state of Alaska to quarantine for 14 days. But the city’s rule is stricter, and that presents a legal question.

Cory Baggen wrote that the assembly should rescind that emergency ordinance, and said it was not necessary and put the city in a precarious legal position. “I am strongly against challenging the state of Alaska through the legal system. It would be very expensive and frankly I do not think the city would prevail,” she wrote.

City attorney Brian Hanson said the city was in a legal “quandary” when it came to which mandates superseded others. He said he’d been communicating with state officials who had been cooperative — but not responsive — to questions about how the state has the authority to preempt the city. Hanson said those officials could not explain how they will enforce that authority.

Hanson said it was up to the assembly how much risk they were willing to take on.

Mayor Gary Paxton thought the state’s approach was reasonable, and wanted to rescind the local ordinances.

“It’s a rational approach,” Paxton said. “If a local business doesn’t want to open like Mary [Magnuson’s] that’s fine. But if a business wants to open, and I’ve talked to a couple business people, and they’re anxious to open, even under these restrictive conditions so they can at least feel like they can get back to work.”

But assembly member Thor Christianson said he wouldn’t vote to rescind either ordinance.

“Mainly because when people die, and they will, maybe not in Sitka, I don’t want to have to take responsibility and that’s going to lie squarely on the governor’s shoulders,” he said. “I don’t think the current mandates are all that unreasonable. I think it’s too soon. I think it’s about a week or two too soon.”

And member Richard Wein said there were a lot of factors outside of the city’s control, in addition to the state’s health mandate 16, that would make it impossible to prevent the arrival of the coronavirus to Sitka.

“This is a question of damned if you do and damned if you don’t. The [state’s] mandate 16 is a bit of a red herring as a focus point for us,” he said. “The truth of the matter is the cat is out of the bag. As soon as you open up fisheries, etcetera, etcetera, you change the dynamic of spread.”

No assembly member made a motion to rescind the hunker down ordinance. Member Valorie Nelson moved to rescind the ordinance that requires all people entering Sitka, including essential workers, to quarantine for 14 days.

The assembly voted that down, with members Nelson, Kevin Mosher, and Mayor Paxton voting in favor of rescinding the order, while members Kevin Knox, Steven Eisenbeisz, Richard Wein and Thor Christianson voted to keep it in place.