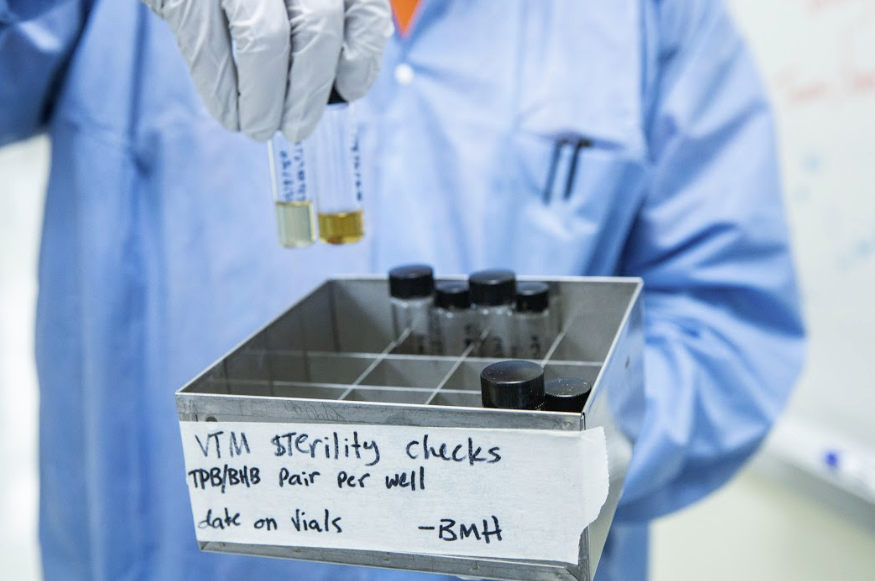 Sitka’s first positive coronavirus test was confirmed by a lab, although the patient subsequently had a negative “rapid test” when he was admitted to the hospital. (State of Alaska/JR Ancheta)

Health officials in Sitka are uncertain how the community’s first confirmed case of coronavirus emerged in a long-term care facility that’s been in lockdown for six weeks.

The patient, a resident of Sitka Long-Term Care, has been admitted to the hospital, and has yet to experience any symptoms of the virus.

The positive result came in on Saturday morning, April 25, as a part of precautionary testing of all 14 residents of Sitka Long-Term Care. The tests were performed at an out-of-state reference laboratory, and are considered reliable.

The patient, a man in his 60s, was transferred to Mt. Edgecumbe Medical Center, where he received a rapid test for the coronavirus, as part of the routine admission process. That test — considered somewhat less reliable — came back negative.

Sitka public health nurse Denise Ewing is doing the “contact tracing” for  the state Section of Epidemiology. The fact that the patient was a resident in a locked down long-term care facility — and has conflicting test results — doesn’t affect her task.

“We still have all of the same protocol to go through,” said Ewing. “It’s still talking with everybody, it’s in a facility with 14 other residents and with staff, so that adds more people that need to be watched. But it’s nice that everybody’s been tested. That part of it has made it easier.”

Everyone at Sitka Long-Term Care — residents and staff — have now been tested, and all results are negative. Ewing says no one else has been given a test, or required to isolate, as a result of contact tracing.

Dr. Elliot Bruhl is the chief medical officer for the Southeast Alaska Regional Health Consortium (SEARHC), which took over long-term care last summer. The facility was one of the first in Sitka to go into lockdown in mid-March.

“We eliminated outside visitors,” he said. “We’ve been screening everybody who comes in, including delivery persons and staff who need to work on equipment. That includes removing their shoes and putting on personal protective equipment whenever they’re in that environment. As I’ve reviewed these measures over the last month-and-a-half I’ve been extremely impressed by the consistency with which the staff there has been following those guidelines, and it’s been a source of confidence for me to witness the way in which they’ve been implementing those.”

Nevertheless, Sitka Long-Term Care is not a prison. While many of the residents are significantly disabled, some are capable of leaving the building independently. But Bruhl says this has not been the case during the coronavirus emergency.

“The facility is, in essence, in a state of lockdown,” said Bruhl. “No one going in, no one going out. From a purely legal, civil libertarian approach, nobody is being legally constrained, but out of an abundance of caution that’s the way the facility’s been managed the last six weeks.”

The news of Sitka’s first positive case comes one day after the state began to relax its shelter-in-place mandate (Health Mandate 16) and to allow many non-essential businesses to reopen — that was on Friday, April 24. The previous evening, the Sitka assembly — in a split vote — extended a local resolution to “hunker down” until May 12, creating an apparent legal conflict between the city and the state, about which rules would take precedence.

Municipal administrator John Leach says that the state now has given cities the flexibility to set their own policies.

“The governor, since the initial release of Health Mandate 16, they’ve removed some of the language in there about that mandate superseding all local ordinances and resolutions,” said Leach. “That is now gone from that mandate, and the governor and his staff have said they’re willing to work with communities to make sure the needs are met of all the individual communities.”

But does that mean that Sitka businesses which reopened on the 24th have to close up again? Leach says the resolution — and news of  Sitka’s first confirmed positive case — put that responsibility in the hands of individuals and businesses.

“The resolution is not an ordinance,” said Leach. “That means it’s a policy, not law. So we’re urging all citizens and businesses to comply with the resolution, but there’s no enforcement arm around that.”

The city’s 14-day quarantine for travelers is an ordinance, however, as is the requirement that businesses submit protection plans for arriving employees. Dr. Bruhl has been outspoken about controlling the arrival of hundreds of seafood workers into Sitka. He believes it is what is standing between this most recent positive being a blip, or the beginning of Sitka’s climbing the coronavirus curve.

“As I’ve said again and again to the city, the thing that’s been most protective is the travel restriction,” said Bruhl. “And the fact that we’re isolated on an island. That’s an advantage, up until a point when the virus is very prevalent in the community, at which point — god forbid — it would be a very real challenge.”

Saturday’s positive was the 5th confirmed case within the SEARHC system in Southeast Alaska. 240 tests have been administered in Sitka, and results are pending for 13 of them.