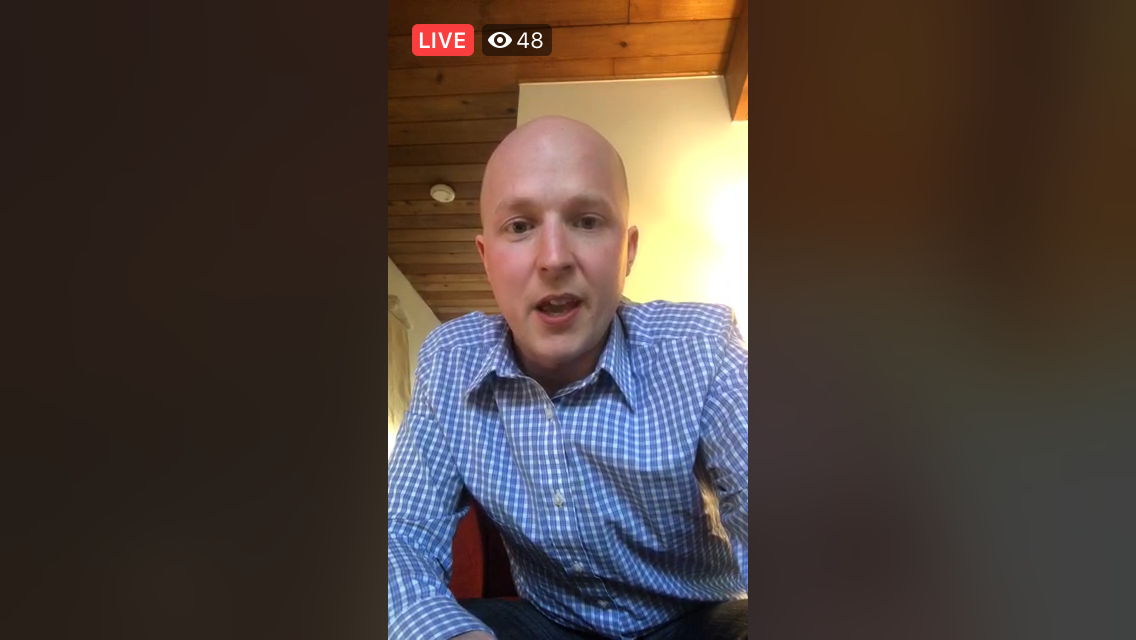 Rep. Jonathan Kreiss-Tomkins (D-Sitka) remained in Juneau while the legislature is “in recess,” on the outside chance a sufficient number of his colleagues would reconvene to appropriate CARES Act funding. “I am fairly certain there will be a special session later in the year, even with covid looming over us,” he said. (FB screen capture)

Over one-and-a-quarter billion dollars in federal covid relief money has arrived in Alaska’s capitol, but it won’t be going anywhere until the legislature can reconvene and appropriate it.

That was the message from Rep. Jonathan Kreiss-Tomkins, during a livestream Town Hall meeting on Facebook Thursday evening (5-7-20).

While the legislature remains technically in recess — rather than adjourned — Kreiss-Tomkins told the 50 constituents who attended the meeting on Facebook that most legislators bolted from Juneau as soon as the business of the regular session was completed. Unfortunately, those legislators didn’t create new rules to allow for a remote session, a decision which Kreiss-Tomkins thinks will come back to haunt them.

“There could be changes to the uniform rules that would allow us to meet remotely, but there was not critical-mass interest in changing those rules,” said Kreiss-Tomkins. “I thought that was misguided, and lo and behold it’s put us in this situation right now — and by the way there are going to be more situations like this that come into being through the course of this year. Covid isn’t going anywhere, the legislature’s going to continue to be put in situations where it needs to act, and we have failed to give ourselves the tools to be able to act.”

Some of the $1.25 billion in CARES Act funding can be allocated to established programs, by the Legislative Budget and Audit committee. The committee handles the routine allocation of federal dollars during the eight or nine months that the legislature is not in session.

But the current situation is not routine, and much of the relief money remains idle. Kreiss-Tomkins thinks the legislature will have to act sooner or later.

“I am fairly certain there will be a special session later in the year, even with covid looming over us,” he said. “There’s just too much for us not to address.”

Kreiss-Tomkins didn’t outline any formula for distributing the relief funds; there’s almost no sector of the Alaskan economy that won’t feel the effects of the slowdown.

He didn’t not pain a very bright economic picture.

“Alaska’s probably the most vulnerable of the 50 states, in terms of impacts of covid economically,” he explained. “Of our three largest sectors, oil and gas has gotten destroyed, the price is in the toilet. State revenues from oil and gas are totally diminished, so that’s really rough. Tourism just went from 100-percent to 0-percent. It’s going to be just a shadow of what that sector normally is. Fishing is still going to happen, but prices are going to be down, and that’s not going to be great. We’re just massively vulnerable.”

But there is an upside: Kreiss-Tomkins is actively involved in tracking data for the COVID-19 outbreak nationwide. He’s one of the co-founders of the CovidActNow website, which models the relationship between the infection rate and mitigation measures (like social distancing and shelter-in-place), against hospital capacity — at the county level.

Alaska is a leader in controlling the spread of covid.

“If you look at the other states around the country, Alaska is in the top five in terms of overall data, how well we’re doing against the virus, and what our response has been,” he said.

Kreiss-Tomkins remains concerned that the rate of infection in the US is not decreasing, however, as is happening in places like Germany, South Korea — and even China. He thinks Alaska’s low density has been an asset, but the corresponding lack of health care facilities is worrisome. Kreiss-Tomkins does not want to go backwards. “We need to be cautious and thoughtful,” he says, “and aggressively track the data.”