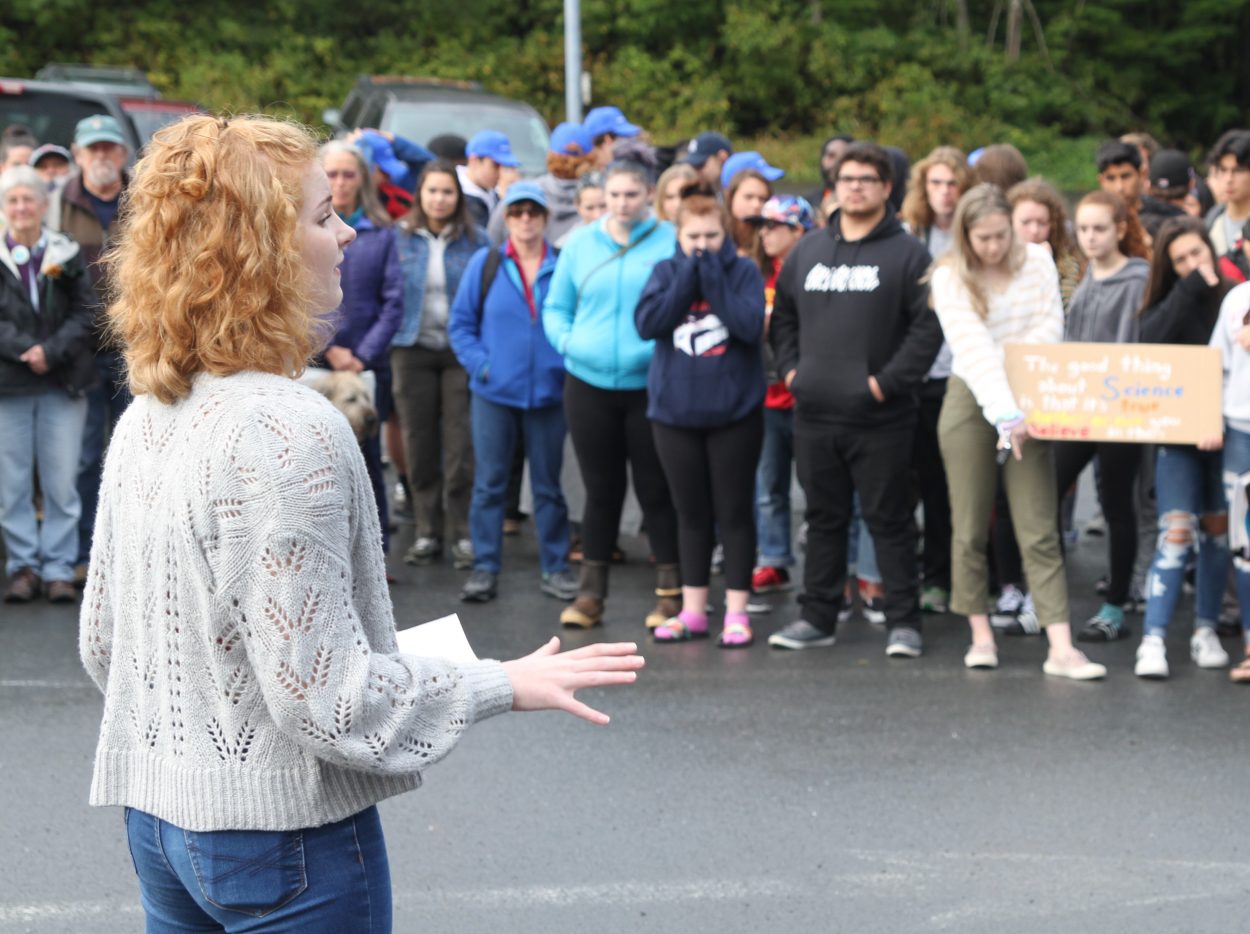 Darby Osborne, with Youth for Sustainable Futures, speaks during a global climate action strike outside of Sitka High School in September, 2019. More education about climate and climate change science was among student demands. (KCAW photo/Robert Woolsey)

The Sitka School District has officially adopted a science curriculum next year that includes the teaching of climate change science.

The move comes as part of an overall update of the science curriculum across the state — the first in 14 years.

Science teachers Stacy Golden and Kelly Buxton presented the plan to the Sitka School Board at its regular meeting on May 6.

Golden explained that although the new standards were developed nationally, their creation was a collaboration at the state level.

“The way those were developed is they were completed in 2013, and they were developed by states,” said Golden. “There were actually 26 states that participated in the process. The process constructed that framework for K-12 science education that I mentioned. It was a collaborative group including scientists, engineers, teachers, and curriculum designers. And the idea is that it was done by the states, for the state, so it was not a federal process. And it did include review and evaluation.”

Although Golden did not spell it out, so-called Common Core standards (aka the Alaska Standards) ran into criticism when they were adopted a few years ago — with many opposed to universal standards they saw as imposed by the federal government. Climate change, however, is a prominent concern in Alaska. The Sitka board seemed to welcome the adoption of standards around its instruction.

Board president Elian Erickson asked Golden if this was a significant change from what had been previously taught in the district.

Erickson – We just recently heard from a group of students, the Youth Climate Lobby, and they specifically mentioned how education around climate change is one of the more important things in addressing the issue. So I’m curious if there are any noticeable differences in this curriculum.

Golden – Yes, there are now actual standards that use the words “climate change” and address that climate change needs to be part of the curriculum. And so I think that’s the biggest change: It’s now something we have to teach, and has to be part of our curriculum, whether we were doing it before or not, it is expected that it’s taught and addressed throughout the science classes.

The instruction won’t be limited to high school classes. The standards bring in climate change science even at the elementary level. Elementary science instructor Kelly Buxton told the board that included human-caused climate change.

“Just to add to what Stacy was saying,” said Buxton,  “at the elementary level there is a human-impact-on-our-planet sort of standards that are being addressed through NGSS, and those are very important as well.”

NGSS refers to the “Next Generation Science Standards” which the Science Standards for Alaska (SSA) mirror. Both Buxton and Golden were members of a committee organized to review the science standards and create an implementation plan, with collaboration from community experts like the Sitka Sound Science Center.

Board member Eric Van Cise said he had complete trust in the process.

“Our town has led the way with science,” he said. “It’s what’s going on globally in recent times, science education and having our students proficient in that is absolutely more critical now than it ever has been.”