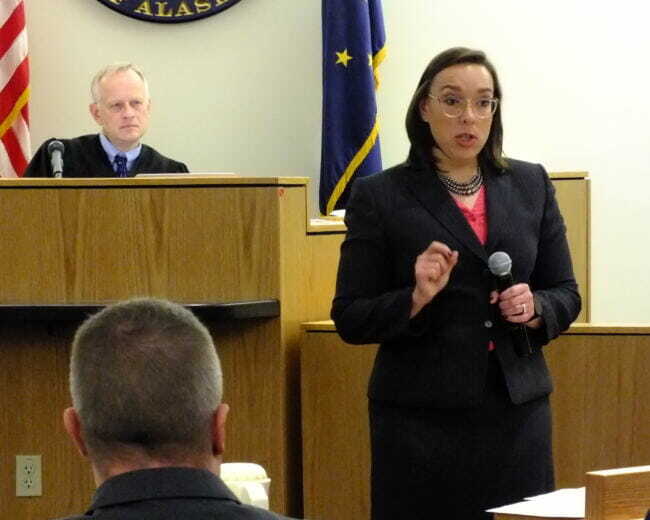 The state’s prosecutor in Sitka has been charged with assault, and will face trial in September.

38-year old Amy M. Williams was arrested in Sitka on Friday, May 15, after police responded to a domestic altercation at her home on Halibut Point Road.

According to the criminal complaint, police arrived on scene and met the defendant’s boyfriend, who was bleeding from the left side of his face, and had blood covering both hands and his torn shirt.

The man showed police bite marks on his neck and right eye, and a third bite on his right cheek — all allegedly inflicted by Williams.

The defendant informed police that she had tried to physically remove the victim from her home, and he had refused. When the altercation moved outside, she told police that the victim pushed her to the ground twice, where she also sustained minor injuries.

The couple had been dating since November of last year, and cohabitating in the defendant’s home since January. Neighbors told police that the couple had been involved in many loud verbal arguments over the last two months.

Both parties admitted to police that they had been consuming alcohol throughout the evening on the 15th. The defendant’s breathalyzer test showed a reading of .037 five hour after her arrest — about halfway below the legal limit of .08.

Williams was taken into custody and arraigned on Saturday, May 16, before Magistrate Judge James Curtain. She was charged with Assault in the Fourth Degree, a Class A misdemeanor, and released on her own recognizance.

She appeared again in Sitka Superior Court on May 19 and pleaded not guilty to charge. Ketchikan-based Judge Kevin Miller scheduled a trial for September 28.

Williams was represented by attorney Natasha Norris. Chief Assistant Attorney General Jack McKenna is handling the case for the state, on behalf of the Office of Special Prosecutions.

Williams has no prior criminal record. This was her first arrest. She has been placed on administrative leave by the Department of Law. She had been serving as the assistant district attorney in Sitka for about two years, and worked in Juneau before moving here. Sitka prosecutions will continue to be covered by the Juneau District Attorney’s office.