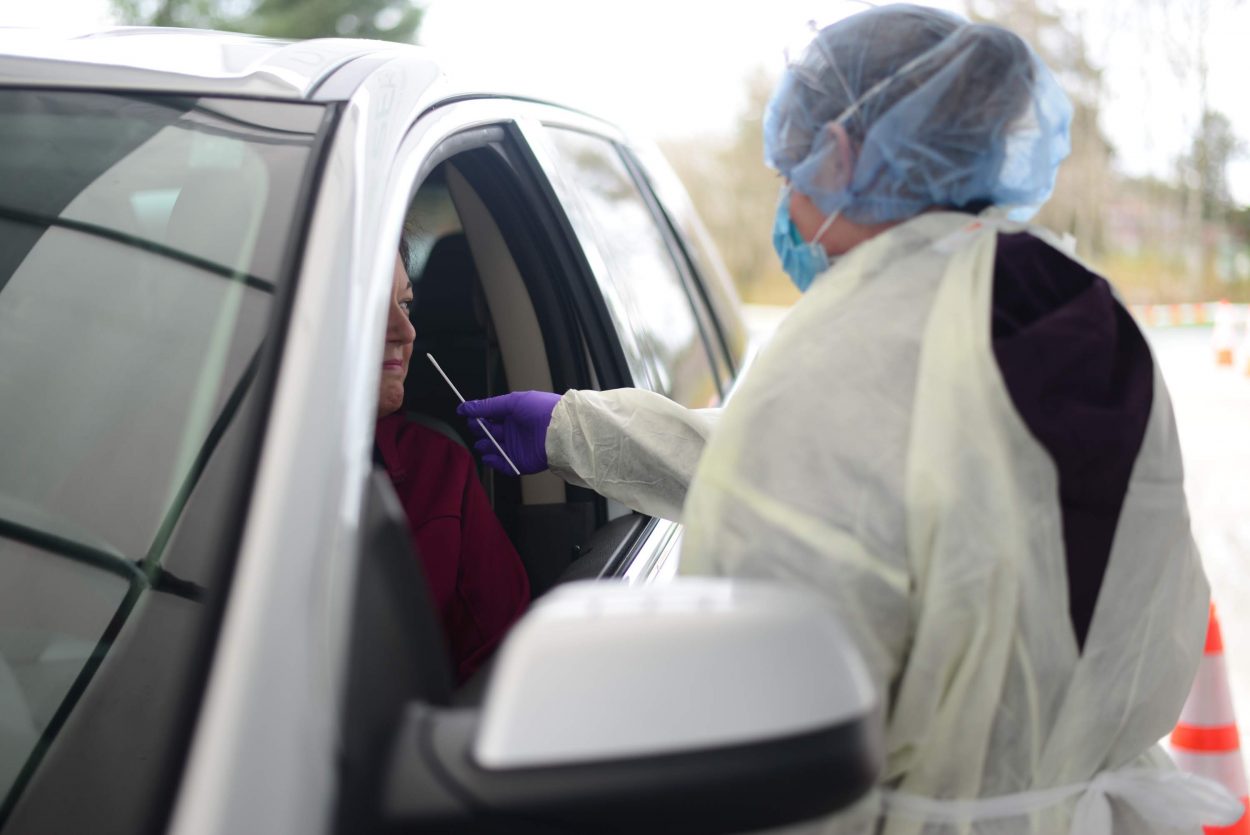 Sitka’s second case of COVID-19 was detected during the routine admission process at Mt. Edgecumbe Medical Center. The lab results were available in less than 24 hours. “It’s (testing) is getting a lot better,” says SEARHC chief medical officer Elliot Bruhl. He adds that Sitka should be equipped with its own testing machine in the near future. (KCAW photo/Berett Wilber)

Sitka’s second confirmed case of the coronavirus is a bit less mysterious than the first one over a month ago, and demonstrates how much better prepared health officials are to manage the pandemic. A routine screening caught this infection, possibly before it became a widespread outbreak.

The patient is a woman between the ages of 20 and 39. She had no symptoms of the COVID-19 virus whatsoever. In fact, she was going to the Mt. Edgecumbe Medical Center in Sitka for something else altogether.

The last confirmed case in Sitka was on April 25, a man in his sixties who had been confined in the Sitka Long Term Care Center. An initial lab test confirmed that he had the virus, but after he was admitted to the hospital and isolated, subsequent testing showed that he was virus free. And the drama of sampling, testing, and retesting took nearly two weeks to play out.

Testing has improved since then

Bruhl – And this patient had a test that was collected at the time of their admission and sent to ANMC (Alaska Native Medical Center). It was a direct PCR (polymerase chain reaction) laboratory test that was positive.

KCAW – So what was the turnaround time on that?

The patient was discharged from the hospital and is quarantining at home. She’s still asymptomatic. The public health nurse is checking in with her often.

Daily cumulative testing has increased significantly in Alaska since the first reported case of coronavirus on March 12. (DHSS image)

Since this patient was out in the community, rather than confined to a long-term care facility, it’s upped the ante for contact tracing: identifying and locating everyone else in her immediate circle who may have been exposed to the virus. Bruhl says there is an official range of contact, beginning with casual – which is not of much concern — to the other extreme, which is.

“And so high-risk contact would be contact that’s within six feet, where neither person is wearing a mask, and the contact period is greater than 10 minutes,” said Bruhl.

High-risk contacts are all being tested.

Contact tracing is the state’s responsibility, but Bruhl says the hospital is supporting the work. Short of a vaccine, this is how you beat a pandemic.

“Having this ability to provide testing, and provide it quickly, in combination with contact tracing – without that, this thing has the potential to move quickly,” Bruhl said. “That’s the overall goal, and that’s the overall strategy for the state.”

A strategy which Bruhl says includes all the things we’ve been doing for the past 12 weeks: Social distancing, disinfecting surfaces, and wearing masks in public. And taking care of your overall health. As the economy reopens, so is health care, and Bruhl says Mt. Edgecumbe has doubled-down on sanitation and staff testing to ensure the safety of all patients – even those without the coronavirus.