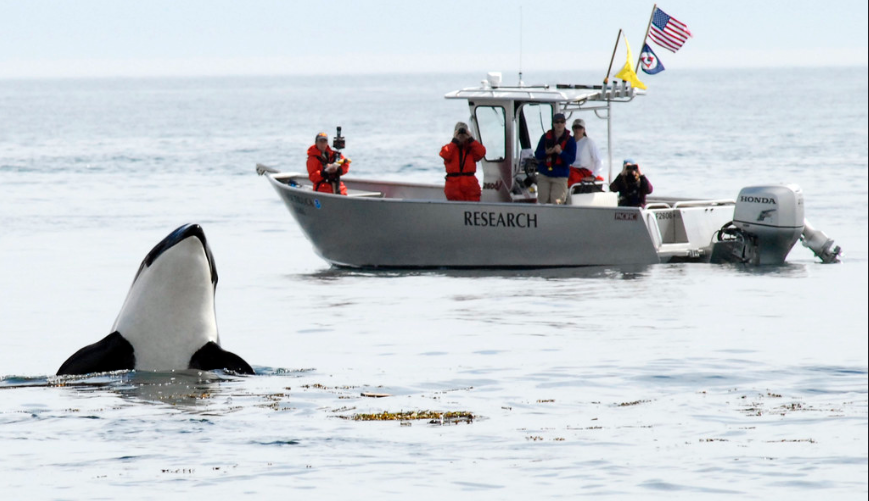 Researchers from the National Marine Fisheries Service  (NMFS) check on endangered Southern Resident Killer Whales near the San Juan Islands in Puget Sound. The Wild Fish Conservancy believes that NMFS is in violation of the Endangered Species Act, through its management program for king salmon, an important part of the whales’ diet, and is suing NMFS in federal court to halt fishing — in Alaska. But US Magistrate Judge Michelle Peterson questioned whether this was the right approach, during oral arguments on May 28, 2020. “Why didn’t you bring this as a consistency review through the State of Alaska?” she asked plaintiffs. (NOAA Fisheries photo)

A federal judge heard oral arguments on Thursday (5-28-20) in a lawsuit brought by a Washington state environmental group seeking to shut down king salmon fishing in Alaska this summer, to protect the food supply of endangered killer whales.

US Magistrate Judge Michelle Peterson heard testimony from attorneys for the Wild Fish Conservancy, the US Justice Department, and the Alaska Trollers Association.

Brian Knutson spoke on behalf of the Wild Fish Conservancy, which is headquartered in Duvall, Washington. He spent much of his 38 minutes explaining why this case should be heard in the federal courts, rather than in one of the several other venues for lodging opposition to fisheries management.

Fishing off of Alaska’s coast — in fact, fishing in coastal waters nationwide — is regulated under the 1979 Magnuson-Stevens Act. The Act has a built-in public comment process, and a process to file formal opposition to regulations — typically within 30 days of publication in the federal register. The latest biological opinion from NOAA Fisheries on the Alaska chinook harvest was in April, 2019. By waiting nearly a year, and then going straight to US District Court, the Wild Fish Conservancy is bypassing established process. Judge Michelle Peterson wanted to know why.

Knutson – The Biological Opinion here wasn’t prepared in conjunction with some new Magnuson-Stevens Act regulations, but instead was a re-initiation of consultation of prior actions, to look at the ongoing implementation of prior regulations.

Judge Peterson pressed Knutson on the idea that the Conservancy was taking a shortcut by going to the federal courts. The National Marine Fisheries Service delegates management authority to the state of Alaska in coastal waters, which comes with an additional layer of public process and review.

Knutson – Only the district courts of the United States have the jurisdiction to review the claims that are alleged here…. Plaintiffs aren’t alleging that state management measures violate the Endangered Species Act or the National Environmental Policy Act, they’re alleging that NOAA Fisheries is in violation of the Endangered Species Act for its ongoing implementation of this program.

Frederick Turner, attorney with the US Justice Department, used his time in oral argument to lean into the idea that the Wild Fish Conservancy was not playing the game according to long-established rules.

Turner – The goal here is that if there is going to be a challenge, those in the fishing industry need to have certainty. They need to know in advance what they’re crew is going to look like, their plans for the fishing season. To the extent that this Biological Opinion would reopen that window for challenging the fishery, it would have to be a short one.

Judge Peterson – What should the plaintiffs have done?

Turner – Under that scenario, the plaintiff, on being put on notice of the Biological Opinion, could have filed a lawsuit under the Magnuson-Stevens Act and the Administrative Procedures Act challenging that authorization, if that’s the remedy it was seeking. And the petition process is still available: A group or a person who thinks there’s some kind of inconsistency between the Endangered Species Act and fishery management can challenge,  first through the state of Alaska Board of Fisheries. And if it receives an adverse decision it can petition the National Marine Fisheries Service, and whatever was decided, that would be subject to judicial review.

The Wild Fish Conservancy has asked Judge Peterson to grant an injunction which would “stay” the regulatory authority of the National Marine Fisheries Service, and effectively close all fishing for chinook salmon in US waters offshore of Alaska. Among the hardest hit by that injunction would be the commercial trolling fleet, most of whom are family-owned businesses based in Southeast Alaska. The Alaska Trollers Association has intervened in the suit. ATA attorney Thane Tienson echoed the government’s position that the Wild Fish Conservancy wasn’t just skipping the rules, it was rewriting them.

Tienson – Looking at the essence of the complaint, what the plaintiff clearly did was through artful pleading, to turn a Magnuson-Stevens Act challenge into one under the Endangered Species Act, to avoid having to comply with a short limitations period.

King salmon have long been an economic mainstay of many communities in the region, with large subsistence, sport, and commercial sectors. To that end, Alaska Trollers Association president Matt Donohoe and past president Jim Moore appealed to the Sitka Assembly for support to fight the injunction. The pair gave a report on the issue two evenings before Thursday’s oral arguments.

Moore said that the lawsuit and injunction were only compounding what was already a difficult situation for salmon fishermen.

“You know, what’s at stake here is the culture and the communities in Southeast Alaska during a really critical time,” said Moore. “So we had to move on this, and anything that you can do to help us fight, we’re in the fight.”

Assembly members agreed to bring some action to the table for consideration at their next regular meeting in June.

US Magistrate Judge Michelle Peterson gave no indication on when she would rule on the Wild Fish Conservancy’s request for injunction. The summer commercial troll season for chinook opens on July 1, so a decision is likely before then.