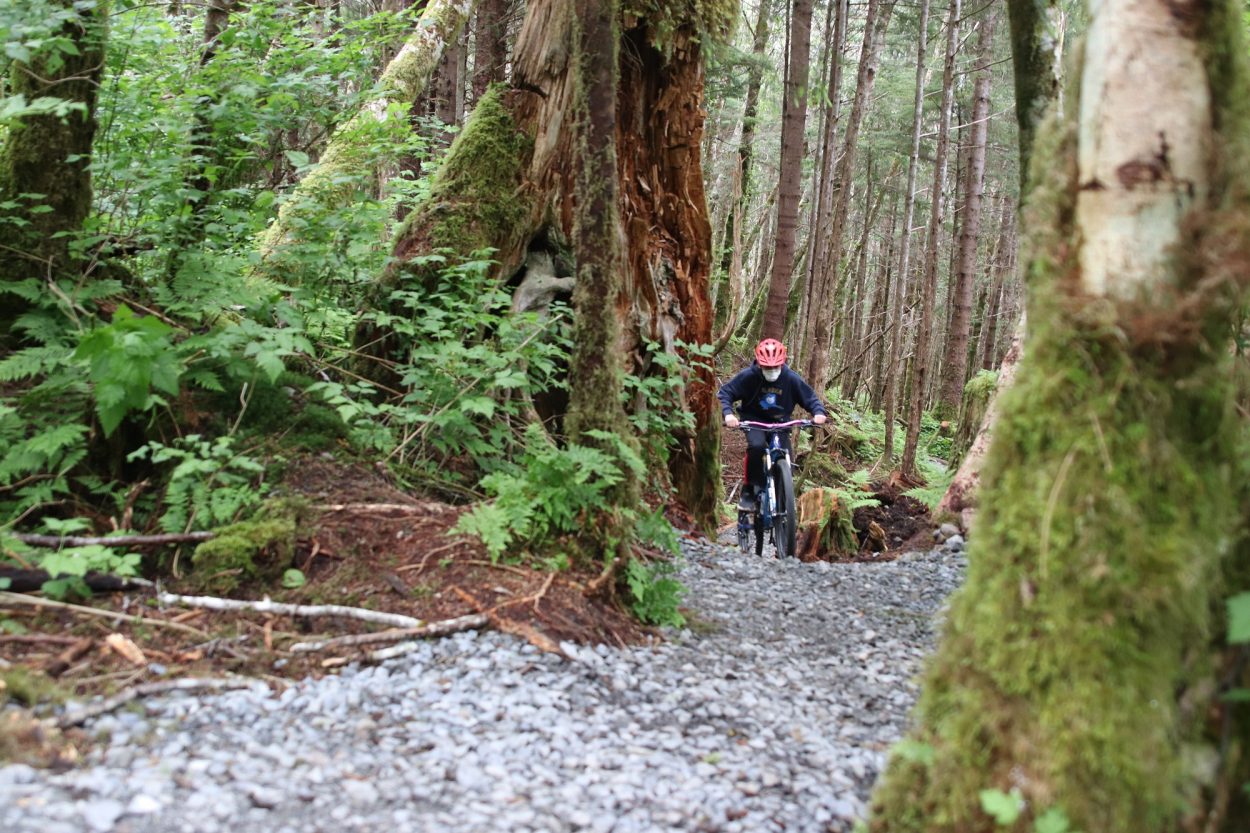 A group of around 20 cyclists stand in a pull out off of Sitka’s Cross Trail.

To their left, a wooden post reads “Bike Only” and “Do Not Enter.” Behind it, a skinny gravel path descends into the forest. It’s the exit of the “907” trail, a brand new loop for mountain biking. It’s Sitka’s first official single-track loop, and for the last few months, it’s kept the Sitka Cycling Club busy.

The group is gathering to celebrate the trail’s official opening. Sitka Cycling Club president Doug Osborne thanks everyone for coming and asks people to stand six feet apart. Most people are wearing masks.

“So I wanna start by recognizing that this is city land. But it’s really Tlingit Aani, Tlingit land. The Tlingit people have been here for over 10,000 years and in that time, been excellent stewards of this place. So we wanna say, ‘Gunalchéesh’ for taking care of the beautiful forest that we’re in now,” Osborne says. “So, we’re here to celebrate, we’re here to thank everybody, and we’re here to plot our next trail.”

Then, project coordinator Amy Volz takes over with the thank you’s. She said the club made the decision to build the trail in early March and came in around 5 days before their deadline of June 1. The trail building happened fast.

“Well, I think that the pandemic was actually a benefit in this case, that young people had a much more flexible schedule to come out and lend some muscle power,” Volz said.

She’s done a fair bit of riding down south on single track trails.

“And have always wondered when is Sitka going to become that place. So I think this is just the beginning,” she said. The Club is already plotting their next potential trail on the other side of the Cross Trail. 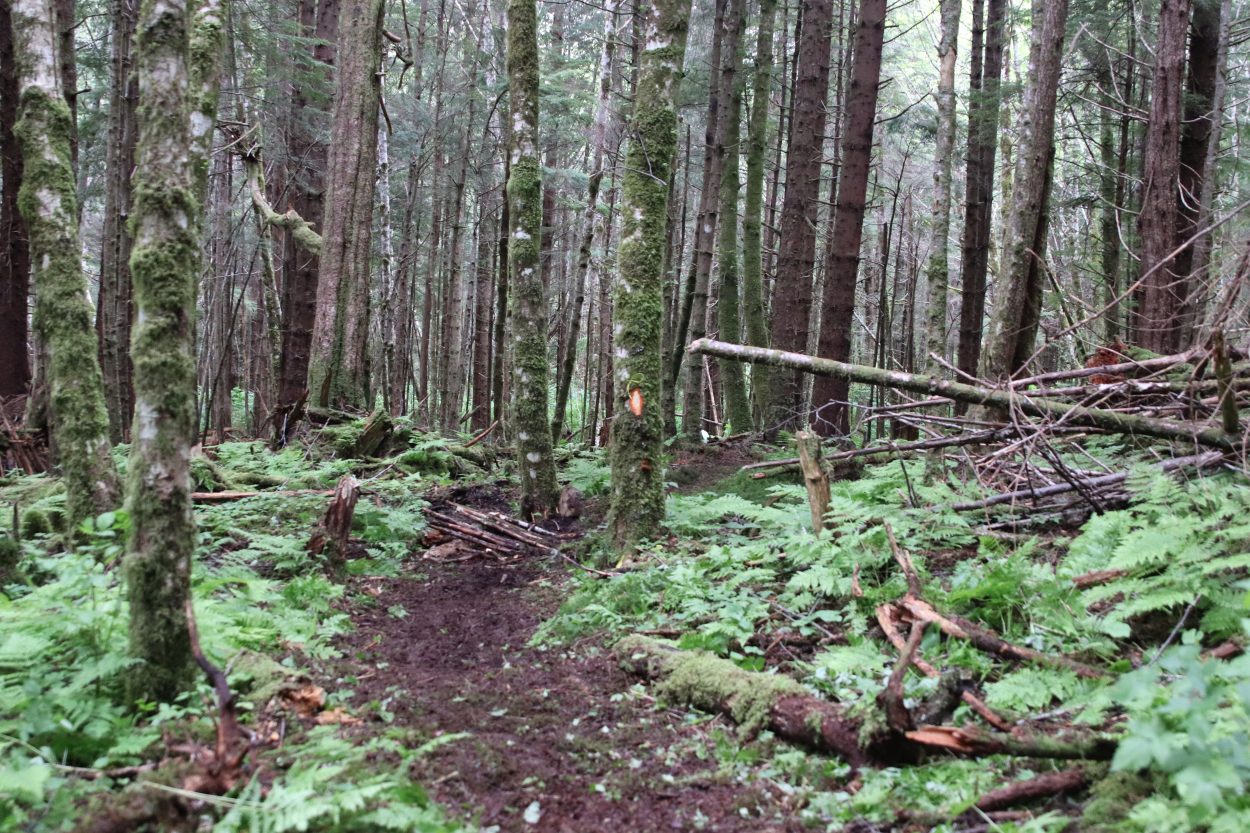 “Like I started doing school at home. And I’d finish school and have nothing to do and you can’t hang out with friends really. So I’d come up here and work on the trail and it’s really nice,” Weiland, who’s a junior in high school, said. “I’m really excited that mountain biking’s finally come to Sitka, and as far getting its first trail, it’s like ‘yay!'”

The group counts down and cheers as volunteer Asa Dow snaps a branch with a pair of loppers to signify the trail’s official opening. 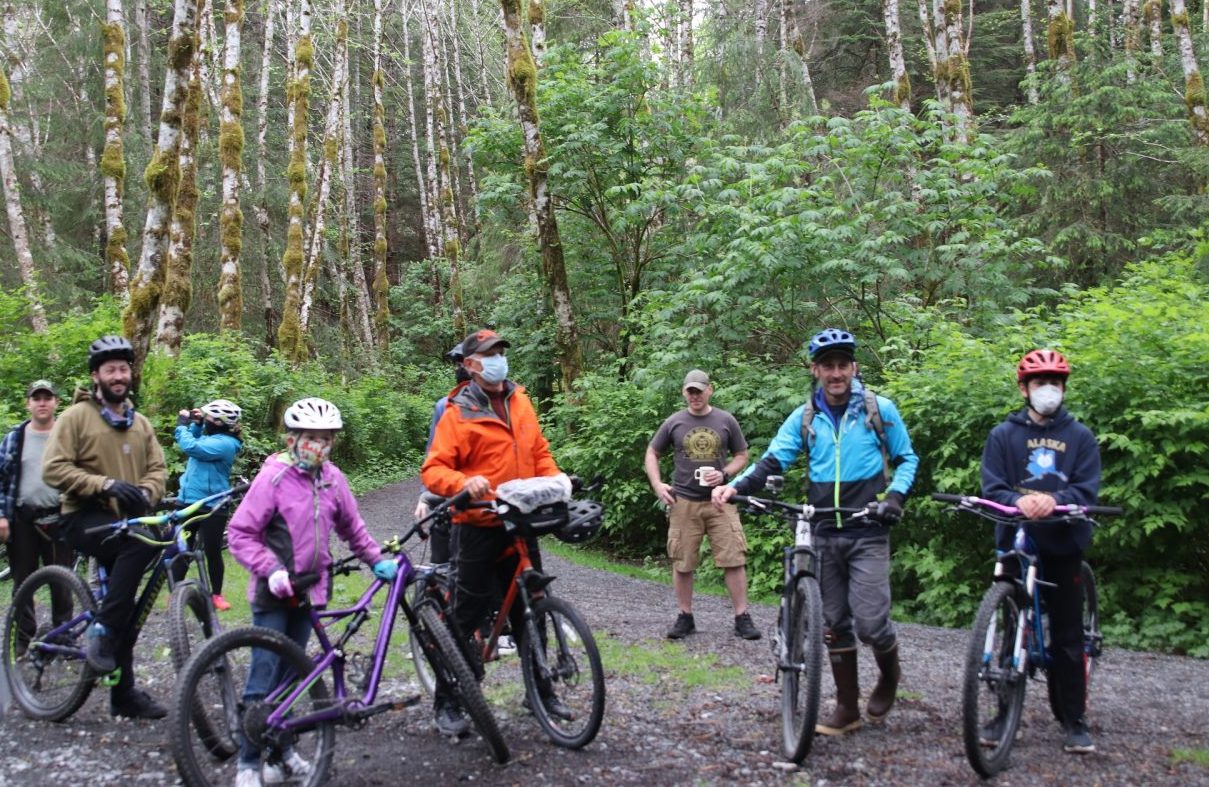 Sitka Cycling Club members count down and cheer at the official opening of the “907” trail. (Erin McKinstry, KCAW / June 2020)

“When I think about like getting through the last couple months and just how challenging these times have been, one thing that had progress every week was this trail,” Prussian said. “And it was a true sign of like, yeah, people come together, have some small things to work on, [and] you can see progress through time.”

When I asked what she enjoys about mountain biking, she said she loves being out in the forest.

“It’s almost a meditation trying to figure your way through a single track trail. And it’s a good strength, endurance exercise too. It takes good energy to climb some of those rock ramps and also stay on the path and not run into trees,” she said. “Yeah, it’s a good piece of mind.”

With that in mind, I decided to give the trail a try myself. And I have to say, the tight turns and steep inclines aren’t for the faint of heart. I had to stop a few times to catch my breath.

I’ll have to practice before I can do it straight through. But I keep telling myself, if a 10-year-old can do it, so can I. She told me, you just have to keep pedaling.