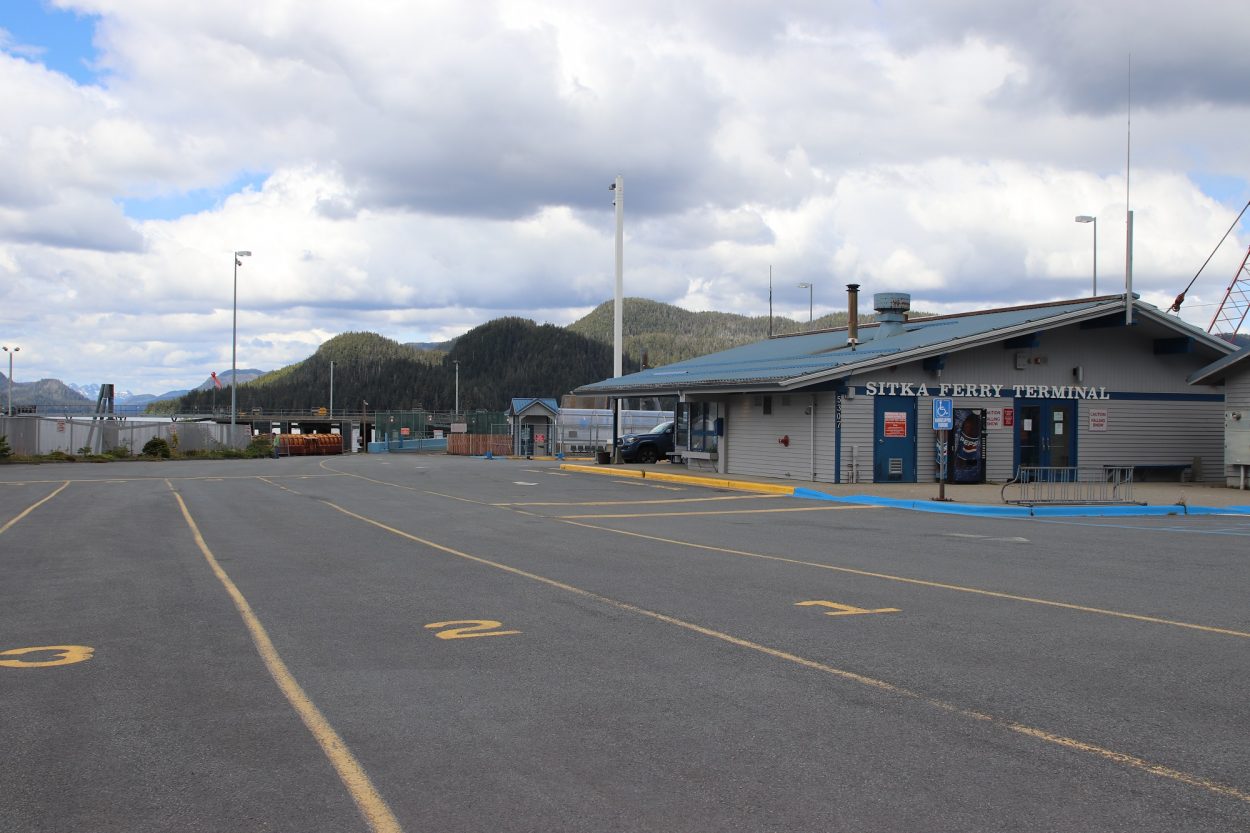 In early June, the Sitka Ferry Terminal is pretty much deserted. If all goes according to plan, sailings will resume on July 7 with a southbound trip from the MV Matanuska. (Erin McKinstry, KCAW / June 5, 2020)

A perfect storm of state budget cuts, maintenance issues and the COVID-19 pandemic has silenced many of the state’s ferry docks this winter and spring, including Sitka’s. But that is about to change. The Alaska Marine Highway System recently updated its summer ferry schedule, and if all goes according to plan, ferries will resume limited service to Southeast communities in June and July.

It’s early June, and it’s quiet at Sitka’s ferry dock. Two kids run around the empty terminal parking lot. Someone walks their dog. But nobody’s lined up to board.

There’s been no sign of the blue, white and yellow Alaska Marine Highway System ferries here since late January. If all goes according to plan, the MV Matanuska will end that silence on July 7, when it’s scheduled to stop here on its way back south to Bellingham.

That is if repairs to its reduction gear are finished in time.  Currently, the ship is dry docked in Ketchikan’s shipyard. Spokesperson Sam Dapcevich said last week that all of the vessels are on track to meet scheduled service demands.

“We are in a kind of a fluid environment right now with the COVID-19 pandemic, so if there are changes to that situation we will make sure to notify the public immediately, but as of right now we expect them to be online as scheduled,” he said.

Over the weekend, a crew member on the MV Tustumena tested positive for COVID-19 on its way to Homer from Unalaska. The Tustumena’s sailings have now been cancelled until further notice.

Sitka was supposed to get five port calls in May and eight to nine ferries a month through September. But maintenance issues and the COVID-19 pandemic put service on hold. Now, the town is set to receive ferry service just once a week: southbound service one week and northbound the next.

Compared to some other communities in southeast Alaska, Sitka does have more avenues for transportation like service from two barge companies and regular Alaska Airlines flights. But that doesn’t mean that almost six months without ferry service hasn’t had an impact on Sitkans. Like Hannah Green, who was scheduled to ship her truck from Bellingham to Sitka on the ferry in February.

“Two days before the ferry was supposed to leave, we got a call saying the trips been cancelled. We can re-book for next month,” she said. “So, we’re like ‘wait, what?'”

A limited winter ferry schedule was planned in an effort to cut back on state spending. But service was disrupted further when the last mainline ferry broke down in January. And then came COVID, which delayed the resumption of summer service in places that hadn’t had it for much of the winter.

Green kept re-booking her truck, and the ferry kept cancelling the sailings. The logistics were frustrating, she says. And expensive. She was making payments and paying insurance on a truck she wasn’t using. Eventually, she just decided to barge it up.

Not all ferry service has been on hold in recent months. Service between Juneau, Hoonah, Angoon, Haines and Skagway has continued, for example. Dapcevich said the biggest reason for continued service to some communities in the region and not others is distance.

“The Tazlina is a day boat and it’s limited in how far it can do a round-trip in one day. It does not have crew quarters on board,” Dapcevich said. “So Angoon and Hoonah, Haines and Skagway are all within reach of Juneau where the vessel is home ported.”

It can’t reach Sitka or Kake and return to Juneau within the Coast Guard time limits, he said.

Joel Jackson is the president of the Organized Village of Kake. For much of this winter, flights through Alaska Seaplanes have been the only option for people coming or going from the Kupreanof Island village of around 550.

Jackson said the lack of service has affected elders traveling to medical appointments who sometimes can’t get in and out of the planes. It’s also been difficult for school sports teams, and people trying to shop for groceries and construction materials in Juneau.

“The Alaska Marine Highway is our highway like anybody else’s highway. We heavily depend on it,” he said.

The ferry system contracted with a private company to do two scheduled runs to Kake, one in February and one in March. Sailings are scheduled to resume on June 22, first from the MV LeConte and then an added stop by the MV Matanuska. Both are currently undergoing repairs. Starting in July, Kake will receive four to five sailings a month. Jackson said that after a winter without regular ferry service, he welcomes whatever they can get.

“We would like more, but we have to be realistic like everybody else. Are we gonna have the traffic to warrant that?” he said.

Some service to Yakutat, Pelican and Tenakee is scheduled to resume this month as well. For Tenakee, that looks like three visits before their dock closes for repairs until at least February.

Here’s a break-down of summer ferry service for the KCAW listening communities:

The MV Aurora is still undergoing repairs at the Ketchikan shipyard, and the Alaska Marine Highway System has decided not to bring the MV Columbia into service this summer “due to reduced travel demand.”

Currently, there are no schedules posted past early October on the Alaska Marine Highway System’s website.