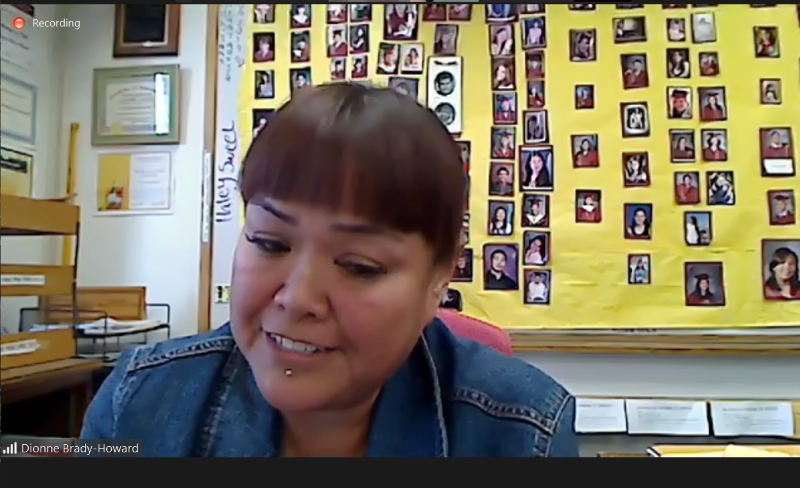 Brady-Howard (appearing via Zoom) urged her fellow board members to choose a successor with cultural ties to the indigenous community. “While I do hesitate to advocate for anything that smacks of tokenism or quotas, I do have confidence in the remaining board members to remember our vulnerable students,” she said. The board will appoint a candidate to fill the vacancy on June 24, to serve until the election in October. (KCAW screen capture)

The Sitka School Board is looking for a new member.

Dionne Brady-Howard tendered her resignation to the board during a special meeting called for that purpose on Wednesday evening (6-10-20).

Brady-Howard said she was grateful for the chance to serve. She urged her fellow board members to stay focused on providing an equitable education for all students in the community.

“And I have always sought to speak for all kids, but I have also seen it as my unofficial role to speak for indigenous students in our district,” said Brady-Howard. “And if these times of racial unrest in our country have taught us nothing else, it’s that often the most vulnerable populations go unnoticed for too long, and fall through the cracks.”

Brady-Howard was first appointed to the board in September, 2016, to fill a vacancy. Thirteen months later she ran for, and won, the seat outright in the 2017 municipal election. A 20-year teacher at Mt. Edgecumbe High School, Brady-Howard brought an educator’s perspective to district governance. But as a lifelong Sitkan and a Tlingit woman, her departure leaves a cultural void.

Brady-Howard hoped the board would choose a successor to fill that role.

“It’s critical to remember that it’s the populations who need most to be heard, who don’t always feel comfortable showing up at the table,” she said. “While I do hesitate to advocate for anything that smacks of tokenism or quotas, I do have confidence in the remaining board members to remember our vulnerable students. To remember our indigenous students. To remember that achievement gap, when they make their choices. Because you’ve stayed true to that in the choices you’ve made to this point.”

Fellow board members offered Brady-Howard their thanks in return. Member Eric Van Cise assured her that her advice would not go unheeded.

“What you’ve asked for us a board to continue, I feel very strongly that we will uphold that, and continue with this mission,” Van Cise said. “It’s been even further illustrated in these past few weeks, we’ve seen across the world just how important equality and justice are. This is so important.”

The district is accepting letters of interest from applicants to fill the board vacancy through 4 P.M. on June 19th. The letters will be released to the public on June 22. The board will interview and choose a candidate during its regular meeting on June 24. The person who is selected will serve out the remainder of Brady-Howard’s term until the municipal election in October.