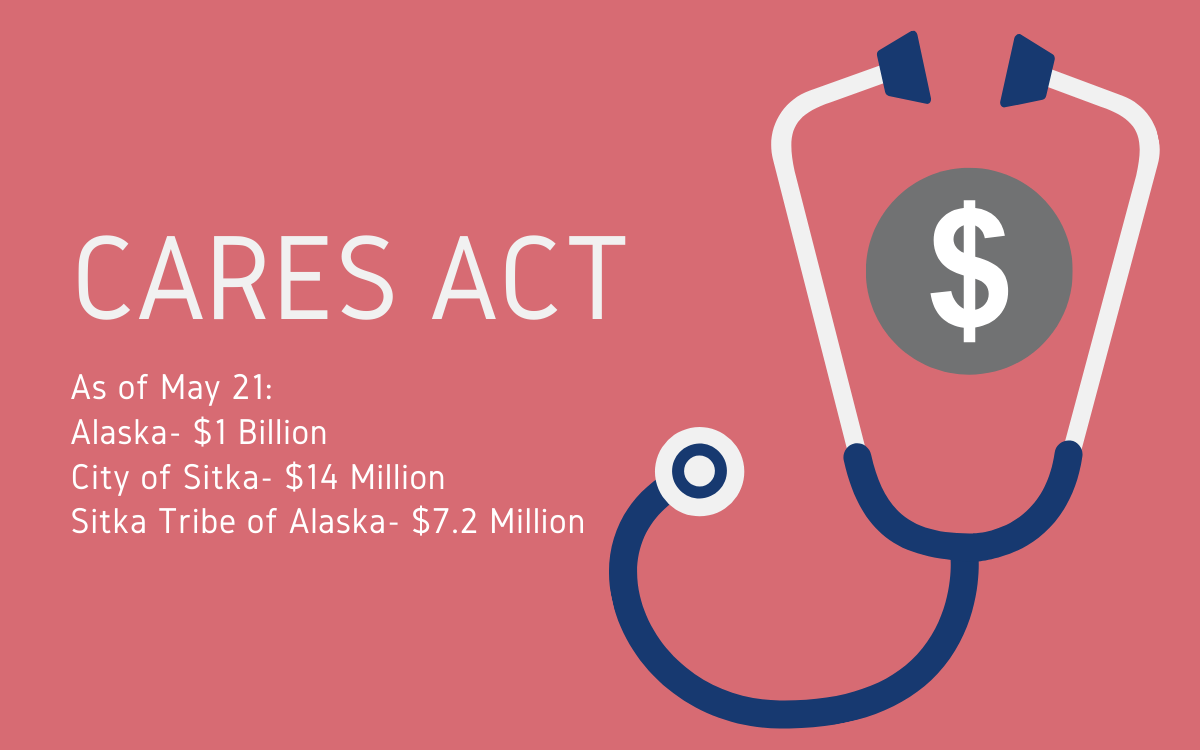 Sitkans who have been financially hurt by the coronavirus pandemic will get a break on their utility bills later this year. When the Sitka Assembly met on Tuesday (6-9-20) it approved funding for two programs- a utility subsidy and a moorage subsidy. Both will be funded with federal CARES Act money. But it was another pot of unexpected federal funds that generated some discussion.

Beginning this month, Sitkans can apply for a utility credit if they can demonstrate economic hardship as a result of the coronavirus pandemic. Only one application per household and business will be allowed, with a July 31 submission deadline. Approved residents will receive a one-time $1,000 credit to their utility accounts. Businesses will receive $3,000.

For moorage, each eligible applicant will receive a one-time payment in their  account, that would be the maximum of moorage costs billed for one quarter of the calendar year.

Only one member of the public, Tom Gamble, commented on the subsidy, calling for the assembly to open the CARES Act funding up for Sitkans with needs beyond utility relief.

The utility subsidy passed unanimously, and the moorage subsidy was approved on a 6 to 1 vote with member Steven Eisenbeisz opposed.

Eisenbeisz voted against the moorage subsidy because he wanted it to be considered first by the CARES Act working group. The group is drafting a budget for the remaining CARES Act funds. That budget will then come before the assembly for approval. Overall, the city is set to receive over $14 million dollars in federal disaster relief. $4.5 million will go toward the subsidies programs.

But CARES Act funds aren’t the only unexpected federal dollars the city received this year. A smaller windfall, around $550,000 in unanticipated Secure Rural Schools funding came through in May.

It’s federal funding that can only be spent on schools and roads. Traditionally, the assembly splits the money down the middle with the school district- but the money isn’t always guaranteed, and the city went several years without receiving the funding before Congress reauthorized Secure Rural Schools in 2018.

The city has already budgeted to give half of next year’s Secure Rural Schools funding to the Sitka School District. But it hasn’t decided what to do with the 2020 money. School board member Amy Morrison said the district was hoping for half.

“In our budget cycle this year, there were two positions that were unfunded that we tried every way we possibly could to get money for, and figure out a way, and we just couldn’t,” she said. “Those were two mental health counselor positions. We would like to have a full-time social worker in every school, and we don’t have one currently at Pacific High School or Blatchley Middle School.”

Morrison said that they’d hoped to fund the counselor positions long before COVID-19, but the pandemic has amplified the need for the positions.

Assembly member Thor Christianson, who was in favor of a fifty-fifty split, agreed.

“Mentally, going to middle school is an emotional roller coaster or washing machine, whatever metaphor you want to use, in normal times,” he said. “I interact with a fair number of middle schoolers these days, and they’re dealing but it’s going to be a real issue come school year.”

But assembly member Richard Wein said the school board should investigate whether CARES Act funding could cover some of the costs, and present their findings to the assembly in two weeks.

“Right now, if you look at our roads, I would rather have the $229,000, because we can’t find it anywhere else, I would rather have that money go to the care of our roads. Because we don’t have any alternatives at this moment, meaning the city,’ he said. “But the school board may, and it may find a very good solution to this for their needs and I’ll say, and then some.”

Mayor Gary Paxton agreed, saying the city had deferred maintenance to Lincoln Street for too long, and cut its own budget by 10 percent.

Ultimately the measure passed 5-2 with members Richard Wein and Gary Paxton opposed. It will come before the assembly for a second reading at its next meeting.

The assembly considered changing several sections of city code. While a motion to remove a requirement for an assistant fire chief position failed, the assembly narrowly passed a code amendment that changes the structure of future assembly meetings.


The assistant fire chief position is required by city code, but the post has been unfilled for at least two years. Fire Chief Dave Miller requested the assembly consider rehiring for the position in 2019, when the assembly established a hiring committee with the goal of trimming the city’s budget through attrition. His request was denied, and the assembly did not budget for the position for FY21.

Miller is set to retire later this year and the city is currently searching for his replacement. Mayor Gary Paxton said that’s why they should keep the position on the books.

“As we lose this great fire chief that we’ve had with Dave Miller, and we move forward, we need to do so with an organization that’s robust enough,” Paxton said.

But Assembly member Valorie Nelson said that removing the requirement from city code was just a legal precaution, and the fire chief could always choose to hire for the post.

“We’ve been going against the code because we haven’t been funding it for two years. So I guess maybe we should all be in jail,” Nelson said. “But it just clears up the code. It goes on to say ‘and as many other positions that may be necessary.’ So the new chief could say “Yeah, I’m going to have three assistant fire chiefs.” But it’s not in the code as a ‘shall.'”

The measure to remove the fire chief requirement from city code failed on a 3-4 vote with members Mosher, Nelson and Wein voting in favor of its removal.

The measure passed on a 4-3 vote with members Mosher, Nelson, Christianson and Paxton voting in favor of the change.

And the assembly heard a special report from Sitka Police Chief Robert Baty. Baty addressed the national conversation around systemic racism in policing and where the local police fall in the national dialogue. After Baty spoke, members of the public called for the assembly to make policy changes, including redirecting funds from the police department that would be used to fill vacant job posts toward more social services (Story forthcoming)