Sitkans grapple with national and local conversations around policing and race 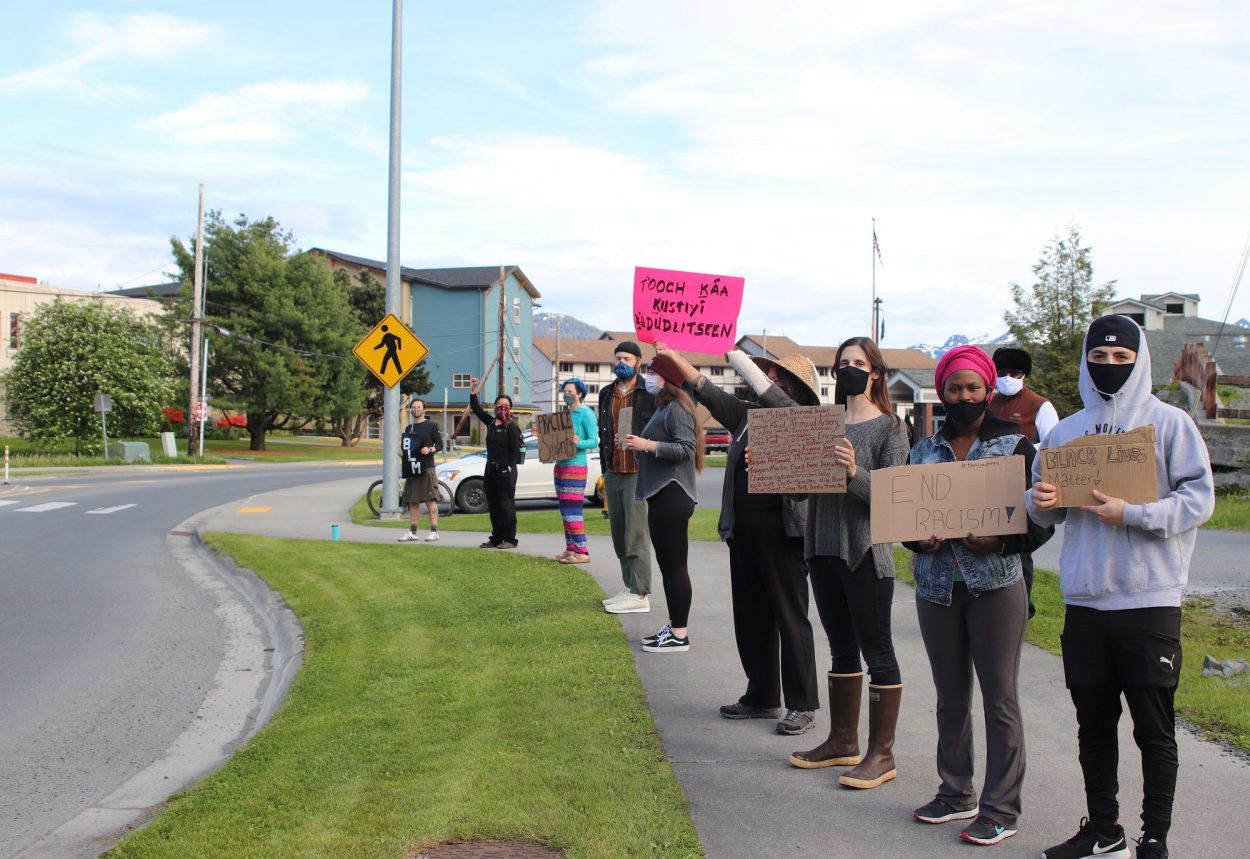 Demonstrators stand in Sitka’s main roundabout in solidarity with the Black Lives Matter movement earlier this month. “It’s important that this isn’t seen as a trend, and it isn’t seen as a one time thing,” demonstrator Devan Parsly said. “So, we intend on doing it for as long as we need to.” (Erin McKinstry/KCAW)

The national conversation around systemic racism and police violence against people of color has reached pretty much every corner of the country, including Sitka. Sitkans have led protests, a vigil and a march to raise awareness this month. They have both local and national concerns.

Around 14 people stand in Sitka’s main roundabout wearing masks and holding signs. One reads “End Racism.” Another is filled with names of Black people killed by police across the country. Some drivers honk in support. Others avert their eyes.

“So as a white-passing indigenous person, it’s important that I tell you that this movement here in Sitka is not for us. This movement is not lead by us,” Parsly says.

She’s also here because she has local concerns around police violence and justice for Sitka’s Native community and around gentrification and racism in Sitka.

“I don’t feel like there is much questioning of racism in this town. There’s a lot of uncomfortability in talking about race,” she says. “Even just standing here every day, we see the true colors of so many of the people.”

Parsly explains that many people don’t recognize her because she’s wearing a face mask. Some people driving by have flipped them off.

“We know who they are, like they’re big prominent figures in this town. And it’s not okay,” she says. 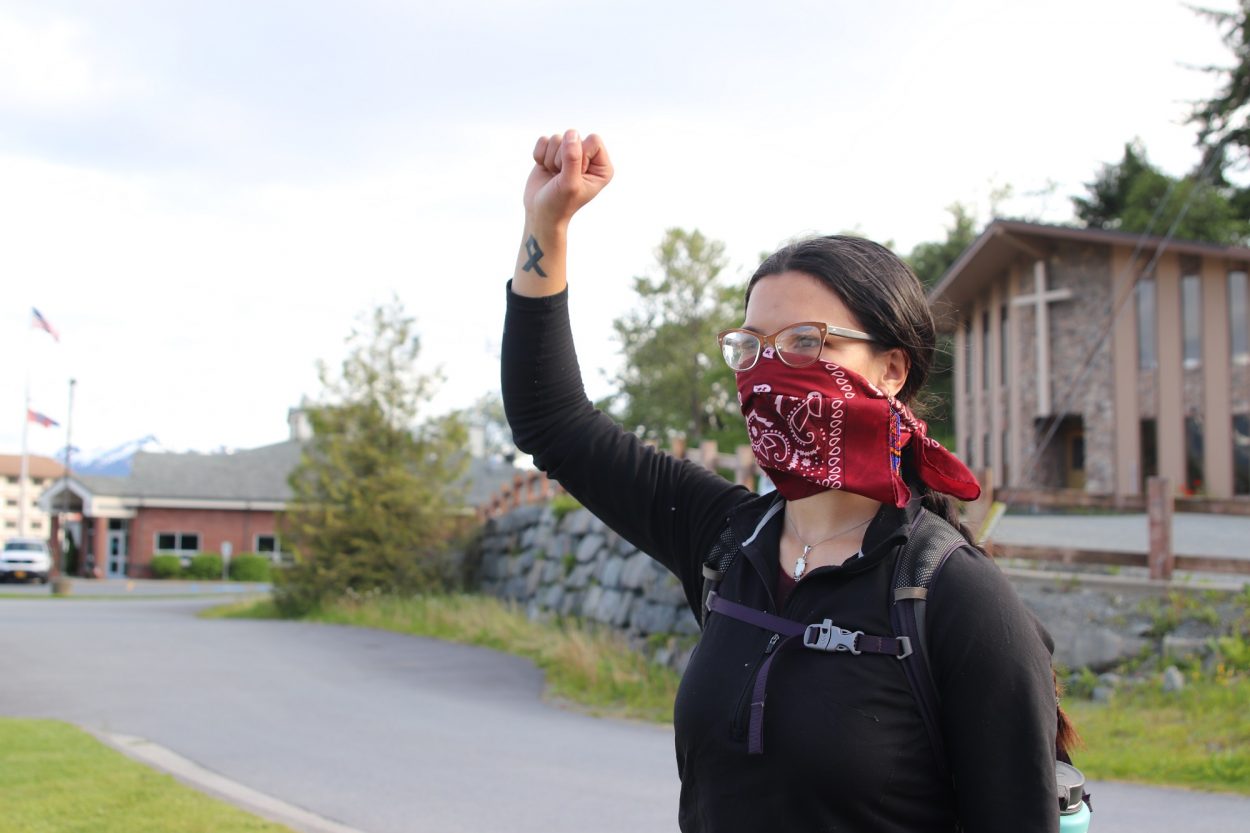 A demonstrator holds up her fist in solidarity with the Black Lives Matter movement at Sitka’s main roundabout. (Erin McKinstry/KCAW)

Seasonal worker Willie Wooten also attended the protest at the roundabout. He said that as a Black man in Sitka, he hasn’t experienced racism or negative interactions with the police here. Instead, he wants to raise awareness for the national conversation around police brutality and systemic racism.

“Because it’s real people of color dying on the streets everyday that are still getting shot by the police as we speak. It has not changed,” Wooten said. “They need to be held accountable for what they’re doing, period.”

Over the last month, that conversation has been hashed out on the town’s Facebook group, Sitka Chatters. Sitka Police Chief Robert Baty added his voice at an assembly meeting earlier this month. He introduced himself using his Tlingit name, Kaa Dat Aah.

“We all know of the horrific treatment of George Floyd, which has sparked national outrage. I am here tonight to spread a message that we as law enforcement understand the plight of our fellow citizens,” Baty said.

Baty has served as Sitka’s police chief for a little over a year and is a board member of the Alaska Association of Chiefs of Police. In a prepared statement that he read before assembly members, Baty noted the recent national dialogue calling for police department “defunding” and even outright abolishment.

“There’s been a movement for radical reform within law enforcement. I can assure you that our practices are current, and we meet or exceed all legal standards. We continually adapt our means and methods to provide better services,” he said.

Baty took over the Sitka Police Department during a tumultuous time. The department has grappled with historically high turnover and fallout from several internal lawsuits. That includes a whistleblower suit over procurement of automatic weapons that was settled out of court, and a sexual harassment suit set to go to trial this fall.

The department also has a history of using excessive force. It came under fire in 2015 when a video surfaced of police tasing then 18-year-old Mt. Edgecumbe High School student, Franklin Hoogendorn, over ten times. Hoogendorn is a citizen of the Native Village of Koyuk, outside of Nome. The incident prompted outcry from the Sitka Tribe of Alaska and an FBI investigation into the department. Hoogendorn settled with the city in 2016 for $350,000, however Sitka admitted no fault in the incident.

KCAW News is investigating whether the Sitka Police Department tracks  use of force by race — either before or since the Hoogendorn case — and plans additional reporting on this issue, including a follow-up interview with Chief Baty.

Baty made big promises when he took over as police chief. He told assembly members that in his first year leading the department, he’s partnered on various projects with the Sitka Tribe, established a weekly officer training, and worked to represent Sitka’s diverse identities while attempting to build up community trust.

“You need to have confidence and trust in your police department. I will say one thing–we are your friends, your loved ones and your neighbors. We hear you. We are you,” he said.

Demonstrator Louise Brady, brought those concerns up at the roundabout too.

“My Tlingit name is Kh’asheechtlaa, and I am Kiks.adi from the Point House here in Sitka. My people have been here 10,000 years,” she said. 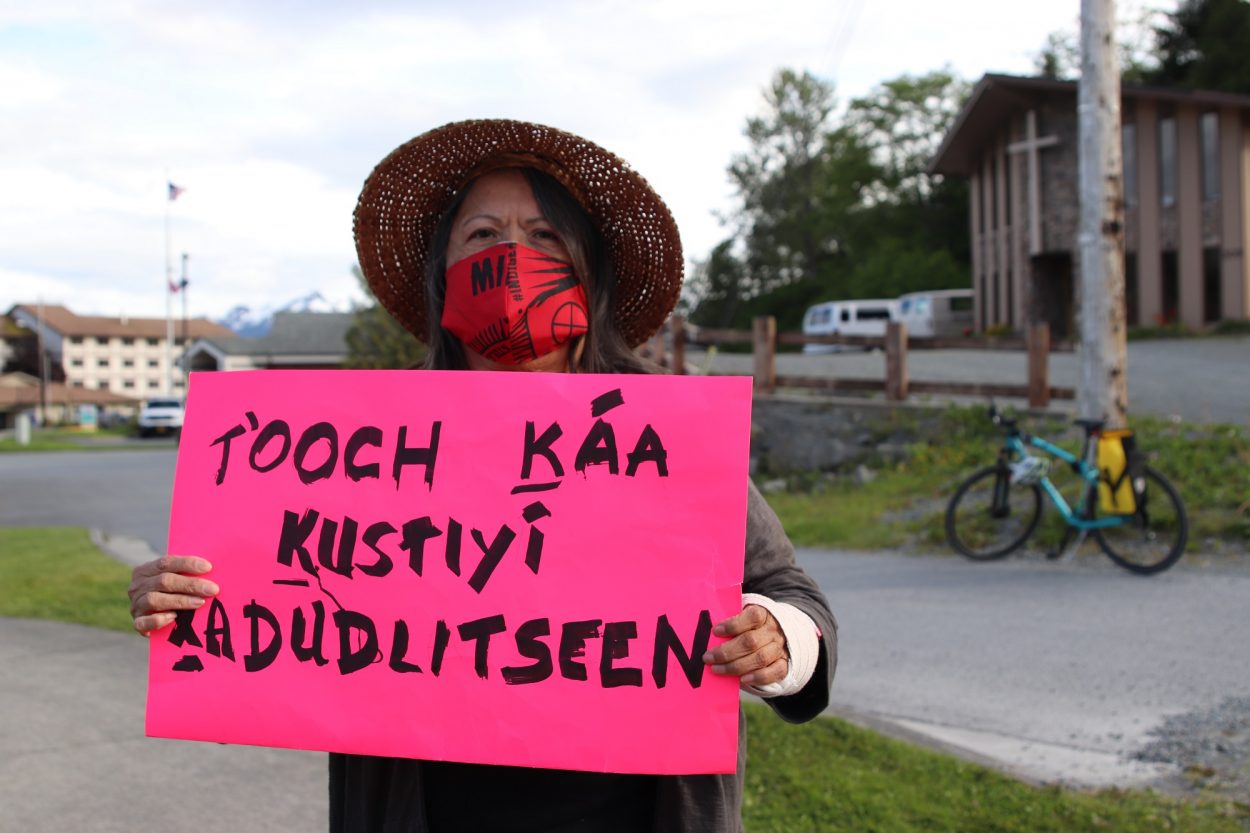 Louise Kh’asheechtlaa Brady holds up a sign written in Tlingit at a local Black Lives Matter protest in Sitka. She’s in agreement with the calls to “defund” the police and wants to see more funding for social services, mental health care and drug and alcohol treatment instead. (Erin McKinstry/KCAW)

“Anytime, I would see a police officer…had stopped one of our young people, I would stop and get out of my car and make sure that whatever was going on, they knew their rights and what they could and couldn’t do,” she said.

She’d like to see more local education around Alaska history and historical trauma. And she’s in agreement with the “defund the police” movement that advocates shifting funds from police departments toward social services, mental health care and drug and alcohol treatment.

“So many of our people are jailed for substance abuse and other issues,” she said.

But with a department that’s already struggling for funds, it’s unclear where that money could come from.