Sitkans gather to demand the relocation of controversial Baranov Statue 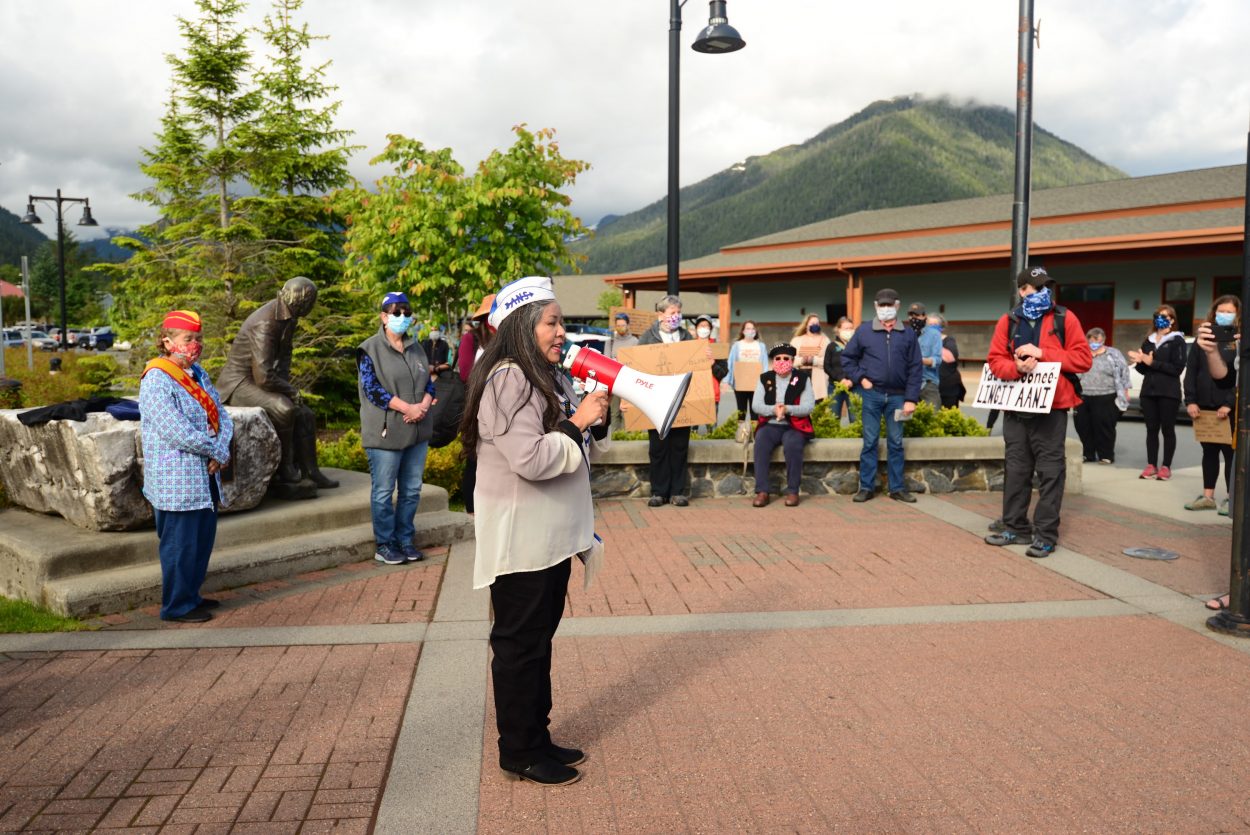 Alaska Native Sisterhood Grand President Paulette Moreno speaks to a crowd gathered around the Alexander Baranov statue in front of Sitka’s Harrigan Centennial Hall on Tuesday. Protesters are asking the city to relocate and replace the monument. (Berett Wilber/KCAW)

The question of what we choose to honor with statues and memorials in this country has resurfaced in recent months. All over Alaska, people have been arguing for the removal of statues of European colonists because they represent a painful history of colonization for Alaska’s Native communities. And this week, conversation over a controversial memorial reemerged in Sitka.

Around 90 people gathered around a statue in front of Harrigan Centennial Hall on Tuesday [6-23-20] ahead of the city assembly meeting. The statue of Russian settler Alexander Baranov was donated to the city in 1989 and often captures the attention of tourists’ cameras.

Over the years, people have called for the statue’s removal. It’s been damaged several times. The current group of protesters is asking the city to relocate it to a less prominent spot and replace it with a more inclusive monument. Dionne Yeidikoo’aa Brady-Howard spoke about why at Tuesday’s gathering.

“This monument is not about telling our history, it’s not about acknowledging it. It’s a monument, it’s a place of honor for someone who does not deserve our honor,” Brady-Howard said. 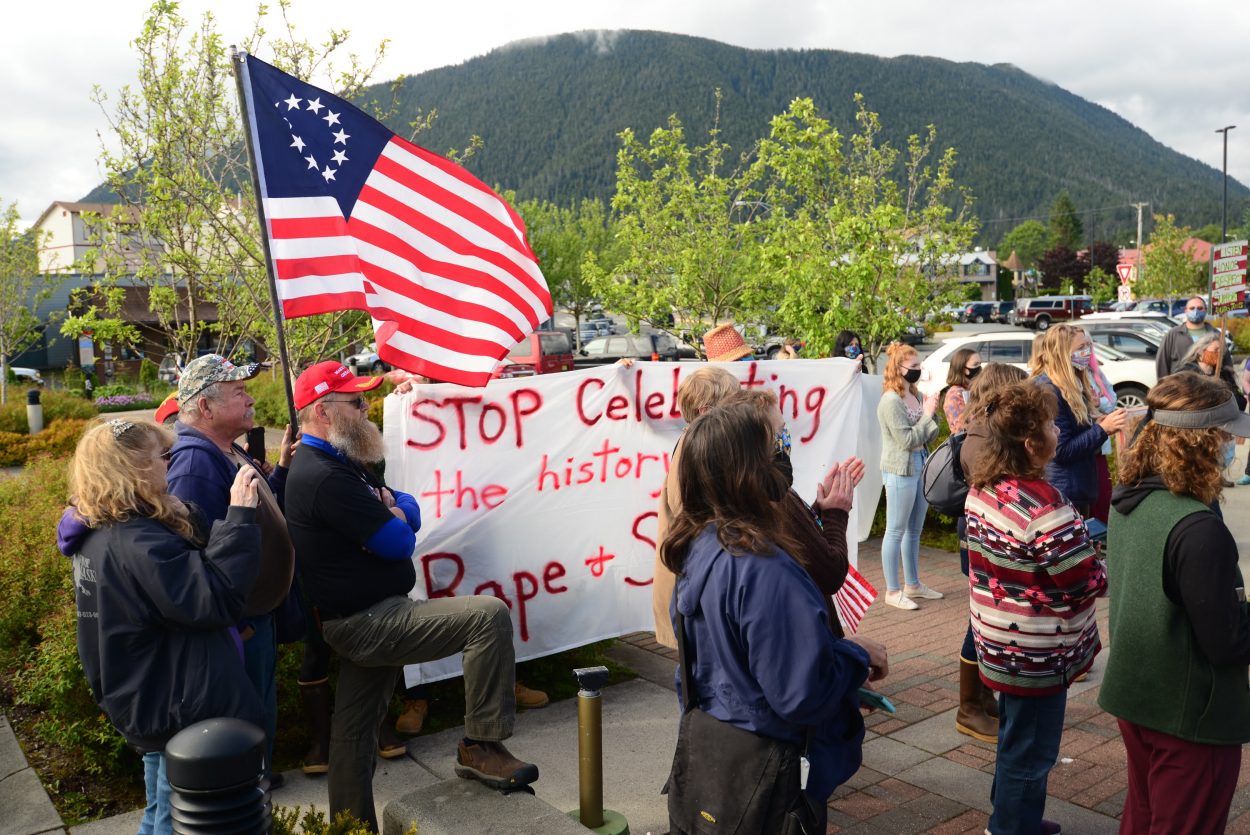 Demonstrators hold up a sign that reads: “Stop celebrating the history of rape & slavery” in front of three to four counter-protesters who don’t want the Alexander Baranov statue removed. At the beginning of Tuesday’s gathering, a handful of counter-protesters and a few protesters engaged in a heated dialogue about whether the controversial monument should remain. (Berett Wilber/KCAW)

A handful of police officers, city assembly members and counter protesters also stood in the mix. At one point, Alaska Native Sisterhood Grand President Paulette Moreno made a plea directly to Mayor Gary Paxton, who came forward to hear her comments.

“Symbols can evoke great pride, unity, fairness and life. Symbols–just like words and actions and violence–can hurt in a profound way,” Moreno said.

In response, Mayor Paxton said, “We’re all one community. We take care of each other, and we’ll sort this out.”

The peaceful gathering ended with a song that translates roughly as “We Are Still Here.” 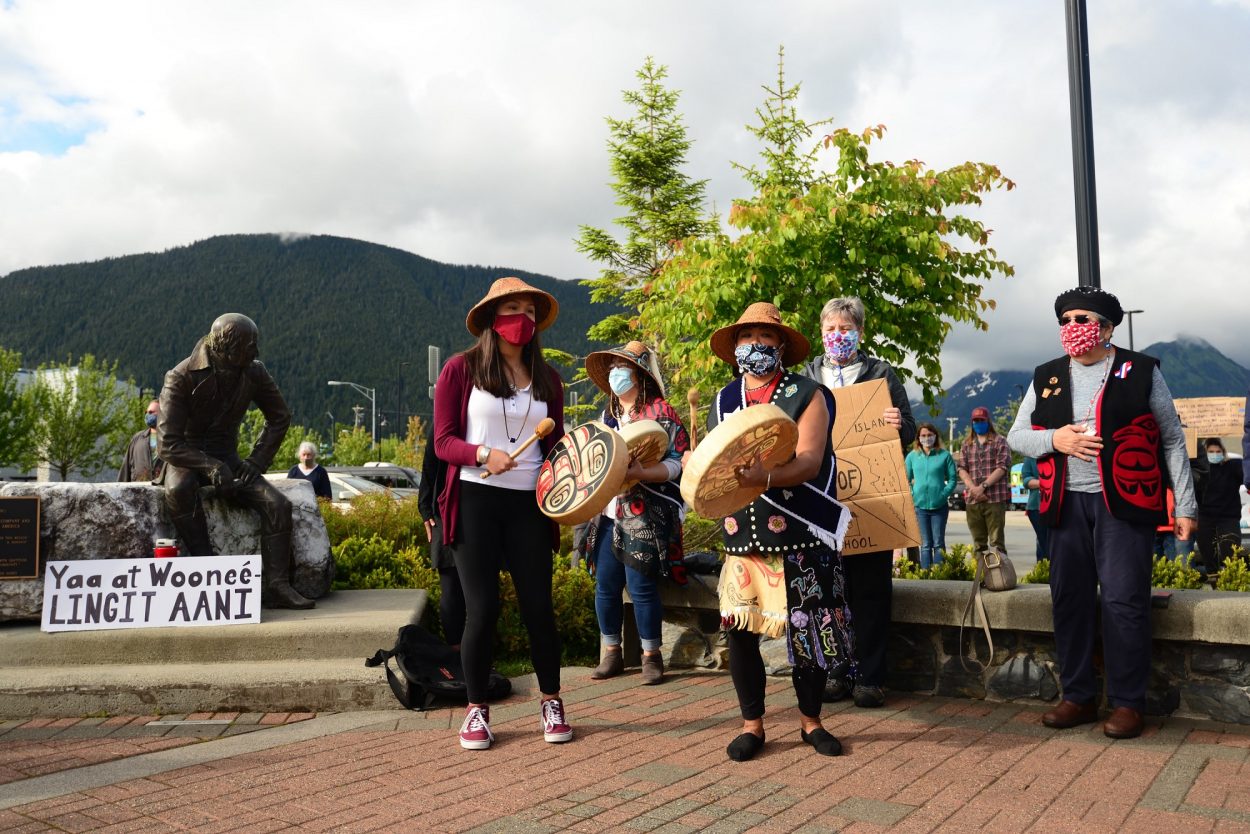 Dionne Brady-Howard, whose Tlingit name is Yeidikoo’aa, drums and leads a song after speaking to the crowd about why she wants the city to relocate the statue of Alexander Baranov: “No, it is not about political correctness. It is about accuracy. The teaching of accurate history is the only thing that keeps us from repeating those mistakes.” (Berett Wilber/KCAW)

The tension over the statue then moved indoors to the Sitka Assembly meeting. Doug Osborne presented a petition of around 900 signatures, and public comment followed.

During persons to be heard, Nicholas Galanin was one of over a dozen residents who called for the removal or replacement of the monument.

“Baranov is a historic figure who is responsible for murder, enslavement, rape and a perpetrator of genocide. This history is still felt by our Indigenous communities today. Indigenous women are statistically highest in missing and murdered cases across North America. Our languages have to be revitalized because they were violently taken from us,” Galanin said. “Use this opportunity to be on the just side of history.”

Galanin also shared a section of an email Assembly Member Valorie Nelson sent to another community member earlier that day.

“Valorie says ‘Maybe we should remove the totem poles and the war canoes,’ and then goes on to say ‘When is this going to end, if you don’t like our town there are other places that might make you happier,” he quoted.

Galanin then called for Nelson to step down from her assembly seat. “I don’t think that she’s capable of serving the community with words like that,” he said.

Under assembly rules, assembly members aren’t allowed to respond during persons to be heard. Once in a while, however,  a member will step away from the table and speak as a member of the public. Member Valorie Nelson used this opportunity to defend her comments and to take a policy argument and make it deeply personal.

Nelson said she found the debate over the Baranov statue to be divisive, and she supported placing a statue of civil rights activist Elizabeth Peratrovich at the Sawmill Creek roundabout.

The question of the Baranov statue wasn’t on the assembly’s published agenda, which makes it difficult to estimate public support for keeping it in place. Nevertheless, word of the demonstration had reached members of the family who donated the sculpture to the community. Andrew, Roger Lloyd, and Brian Hames spoke on behalf of their grandparents, Lloyd and Barbara Hames, who commissioned the piece in the 1980s. The family has historically stayed silent on the statue, but Brian Hames said they agreed that the future of the statue was a public decision.

“Our family is grieved to know that the statue offends or makes any members of our community feel uncomfortable in any way. We value and appreciate the rich diversity of Sitka’s people, and we feel that whether the statue stays in its current location or is moved elsewhere is not our decision to make,” he said. “The statue was a gift, and like any gift, whatever is ultimately done with it is up to the recipient, the city of Sitka.”

The Hames brothers had one caveat: They asked that if the statue is removed, that it not be defaced or destroyed out of respect for the sculptor,  Joan Bugbee-Jackson. They hoped it might be  displayed in a museum where it could be treated as a work of art, and where the history of Alexander Baranov could be more accurately represented.