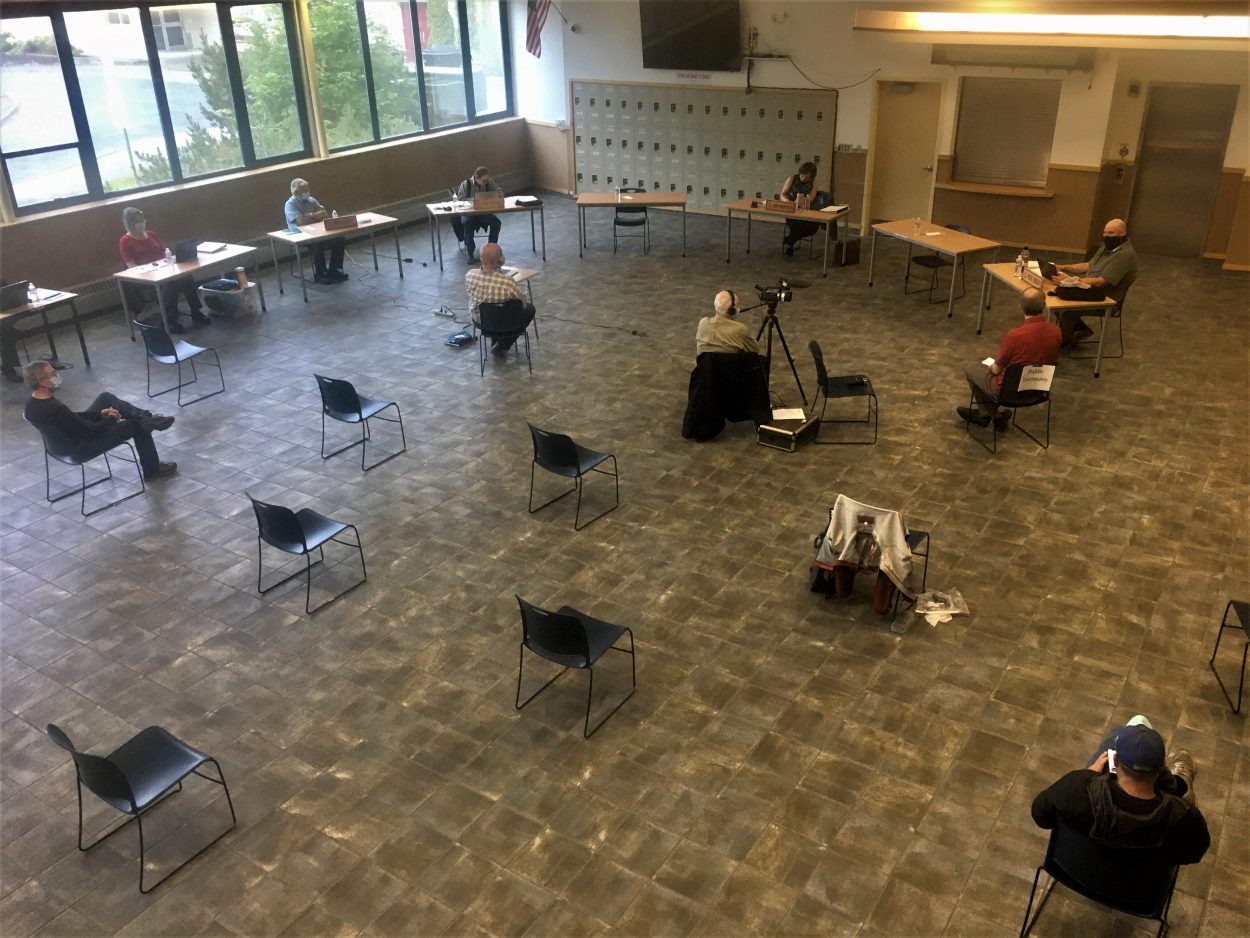 Andrew Hames (in red, far right) answers interview questions posed by the Sitka School Board on Wednesday evening (6-24-20) in the high school commons. Interim superintendent John Holst said the physical distancing in the room was an effort to role model what school might look like when it opens in the fall. (KCAW photo/Robert Woolsey)

The Sitka School Board has a full roster again.

Following a series of very brief interviews on Wednesday evening (6-24-20), the board appointed Blossom Twitchell and Andrew Hames to fill vacancies created by a pair of recent resignations.

With only three members left on the board, the interview process didn’t take too long — about 4 minutes per applicant.

In the end, the board chose Blossom Twitchell on a first unanimous ballot. It two more tries to reach a unanimous consensus on the second member, Andrew Hames.

Another applicant, Mary Suminski, split the second ballot with Hames. During public testimony on the balloting, Suminski took the unusual step of  endorsing Hames, saying that she believed he would be an excellent member of the school board. Mike Vieira, president of the teacher’s union (Sitka Education Association), also endorsed Hames.

Suminski’s decision to concede cleared the way for Hames to get the seat on the third ballot.

Blossom Twitchell is a workforce development specialist with the Tlingit & Haida Central Council. She manages the Temporary Assistance for Needy Families program — also known as TANF — for Southeast Alaska from Sitka to Yakutat.

During her interview, which took place via zoom, she told the board that she had the experience and skillset to make the most of the short appointment. 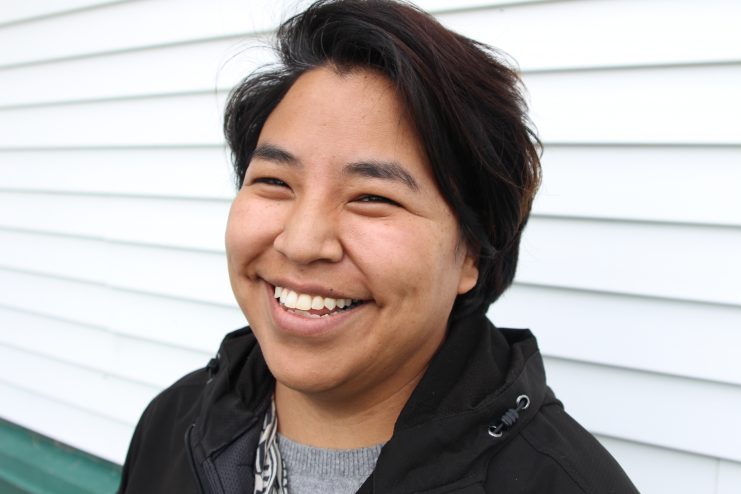 “I always try to be respectful,” said Twitchell, “but I will speak up and I will be able to think through all the decisions that need to be made. I understand clearly what the school board needs in the role. I’m very good at policy, and that’s pretty much my job. So I’m willing to help out.”

Twitchell has two kids in the Sitka School system, and a 14-year old son who will be attending the Galena Interior Learning Academy. In a follow-up call with KCAW, she said that she’ll use her board appointment to assess “whether this is the right path, but I feel like I most definitely will run in October.”

Twitchell has not held public elected office before, however she ran unsuccessfully for the Sitka Assembly in 2019.

Andrew Hames is a graduate of Sitka High who worked as a teacher in the first part of his career, but has since returned home to work in his family’s grocery business.

Hames has been active in music education at the Sitka Fine Arts Camp since he came back to Sitka six years ago. He’s been thinking about the school board as a next step.

“It’s going to be different obviously than teaching in a classroom,” Hames said, “but I’m excited to learn about the board, and learn more about how this process works.”

Hames has three elementary-school aged children. Like Twitchell, he’s thinking about the appointment as a way to test the waters before becoming a candidate for a full term in the fall.

“This is going to be a great way to wade into the waters — actually it’s more like jumping into the deep end. I’m excited to get to spend time working on something like this, and I’m definitely considering running for the seat.”

Hames’ previous public service includes holding a seat on Sitka’s Marijuana Advisory Board, which was created to establish local licensing and regulations following the legalization of recreational cannabis in Alaska in 2014.

Hames and Twitchell take over the seats of Dionne Brady-Howard and Elias Erickson, both of whom resigned earlier this month. Their 3-year terms were to expire in the fall. Hames and Twitchell will serve until October 6, when voters will fill the two seats in the municipal election.

In addition to Mary Suminski, the two other applicants who were passed over for appointment were former board member Cass Pook, and Mitch Mork.

The board encouraged all the applicants to run for the two open seats in October.

A “Smart Start” for Sitka’s schools

School in Sitka will be starting a week later than scheduled — but what the experience will look like for students and teachers has yet to be determined.

The Sitka School Board on Wednesday (6-24-20) approved pushing back the start of school to August 27, in order to give teachers a full inservice week to prepare for a so-called “blended program,” where they may be teaching only half of their students at a time, while the other half works online from home.

Interim superintendent John Holst called it an A/B schedule, with students coming on alternate days Monday through Thursday, and then every other Friday.

“Our goal is to be running, just like we would normally do, except we will be making a lot of accommodations,” said Holst. “And the difficulty for us doing that is the social distancing. Six feet in most rooms would probably not be possible with all the students there. So we would have to adjust and say four feet or five feet — whatever it is — and perhaps when people are closer we may have to have students wearing the mask.”

Each student in grades kindergarten through 8th would have an iPad, supplied in part with grant funds from the Sitka Tribe of Alaska. High school students will have laptops.

Note: Holst said that a task force is convening tonight in the main auditorium of Harrigan Centennial Hall to explore policies and procedures for running the district during the coronavirus pandemic. There is room for up to 40 people to safely attend the meeting, which begins at 6 P.M. tonight.

Holst said that there are two other listening sessions scheduled — also at Harrigan Centennial Hall: 11 A.M. to 1 P.M. on Wednesday, July 1, for staff, and the same time on the following day, July 2, for parents. Holst told the board that he was working in close consultation with SEARHC chief medical officer Dr. Elliot Bruhl on creating the district’s “Smart Start” plan, which has to be submitted to the state Department of Education and Early Development by the end of July.

Holst also said that the district was planning on shoring up its REACH Homeschool program. Of 276 families surveyed by the district last week, 65 expressed an interest in correspondence education. Holst cautioned that homeschool programs in Fairbanks and Galena had outpaced Sitka’s program in recent years, costing the district both students and state revenue. “We haven’t been competitive for 10 years,” said Holst, “our campaign will be ‘Shop Locally’.”

And finally, in order to meet state deadlines for preparing a “Smart Start” plan, the school board scheduled its first-ever summer meeting for Monday, July 27.