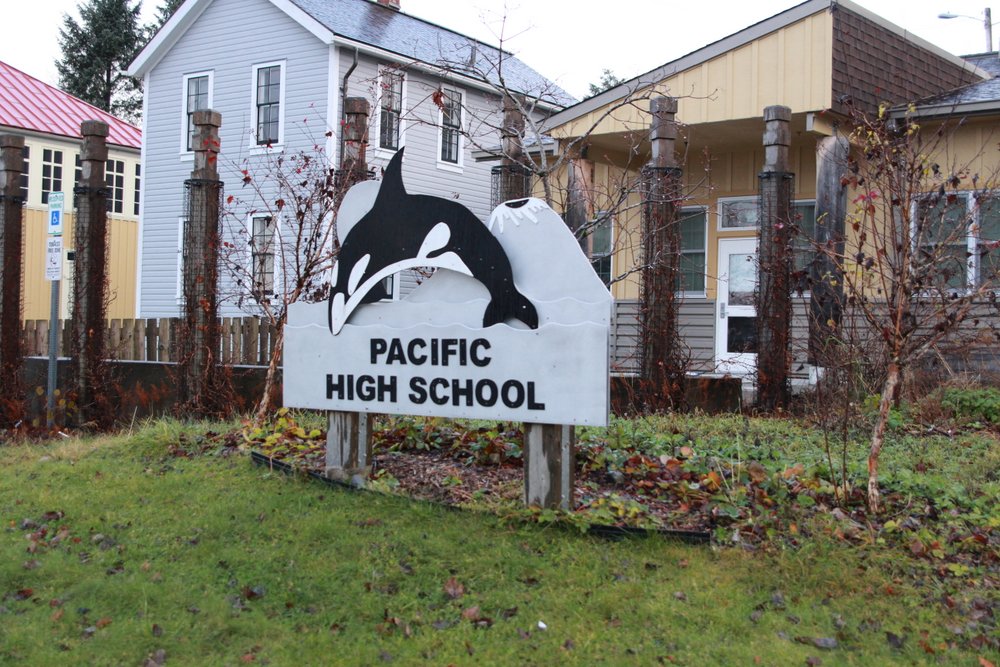 Pacific High School may have a full-time counselor back on staff next year. On Tuesday (6-23-20), the Sitka Assembly approved a funding split for FY20 Secure Rural Schools money. The Sitka School Board plans to use around $220,000 to hire full-time counselors at each school in the district. (KCAW Photo/James)

The Sitka School District will have counselors at each school next year, thanks to a windfall of federal money. When the Sitka Assembly met on Tuesday (6-23-20) it voted to split over $450,000 in unexpected Secure Rural Schools funding between the city and the district.

The decision was not without some debate. The city has already decided to split next year’s Secure Rural Schools funds with the school district, but this funding came through at the last minute — for this year.

Member Richard Wein argued that the city should keep the entire amount for road repairs, while the school district should  find a way to use CARES Act funding to pay for its needs.

“I would heartily support additional monies to the school district. They need to be, I think, a lot more creative and I think they can be,” he said. “And if they meet some needs through the monies from the CARES Act, they can shift those funds.”

Mayor Gary Paxton voted against the split on the first reading two weeks ago, but had a change of heart. He said he would reluctantly vote to share the funds with schools, even though the city reduced its budget by $2 million dollars for 2021, and more budget challenges are coming down the pike.

The assembly voted 5-2 in favor of dividing the funds evenly, with members Valorie Nelson and Richard Wein opposed.

How to handle federal funding for schools wasn’t the only disagreement at Tuesday’s meeting, but the other was more akin to a courtroom drama.

In this case, Nick Feronti, of the Northern Justice Project, was appealing the city’s denial of his public records request. Feronti had asked for information on a police department investigation that involved former detective Ryan Silva, whom he had represented in a recent whistleblower suit against the department. Feronti argued that access to those records was a fundamental right.

“It shouldn’t be controversial for a citizen to ask for basic public documents about a vague investigations that are arguably retaliatory,” said Feronti.

Feronti didn’t state why Silva was being investigated by police, however , Silva himself suggested that it involved his ex-wife.

“She and I, even though we’re going through a custody argument, we talk regularly,” Silva said. “She is completely open with me and the police department responded to her house at my request back in January. So yes, I know about the incident that happened then.”

Sitkans gather to demand the relocation of controversial Baranov statue