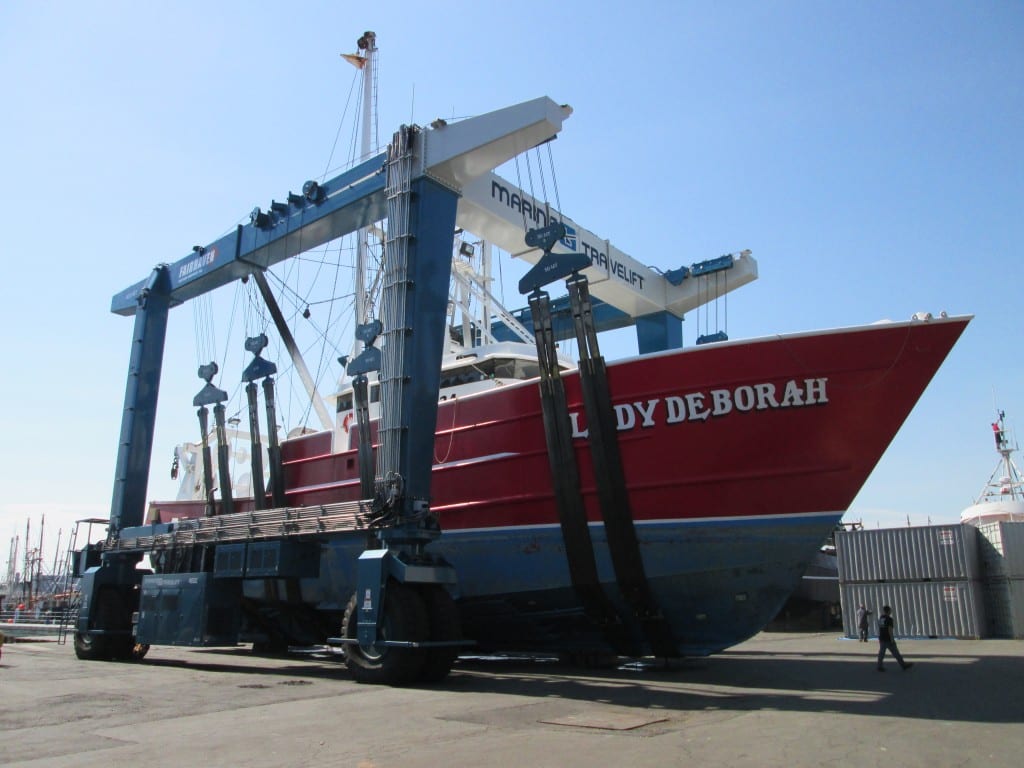 Size Matters: Since Sitka first began to investigate building a shipyard at its industrial park, there’s been no consensus on the capacity of the equipment. Pictured is a 300-ton Marine Travelift, which some say is too large for the majority of Sitka’s vessels. (Marine Travelift promotional image)

A plan for a new marine haul out and boatyard at Sitka’s industrial park is headed to the assembly table — this time with negotiated terms. While the plan calls for private management and operation of the facility, it also involves significant amounts of public funding — and not everyone is happy about it.

The board of the Gary Paxton Industrial Park met on June 22 to review the negotiated terms of a prospective agreement with SIMS, the Sitka Industrial Marine Shipyard.

Note: The park board voted 4-0 to move the project to the assembly table. The assembly will take up the matter at a special meeting on Tuesday, June 30. Sitka municipal administrator John Leach has recommended that the assembly reject the SIMS bid pending the outcome of the BUILD grant.

SIMS was formerly known as WC Enterprises, and their proposal outscored one other business when their plans were reviewed in city hall last month.

But principal Dan Cooper told the board that — besides the change in name — he and his partner, Kelly Warren had made some other changes as well: Gone is the amphibious lift that could have rolled in and out of the water, in favor of a traditional sling lift that travels on a custom-built pier.

And, as Cooper explained, that travelift will be large.

“We did check into another big concern, which is can we haul small boats with this lift?” Cooper said, showing a photo of a giant machine holding a pair of recreational vessels. “And here’s a picture of a very large lift hauling small boats. And there is not an issue — even checking with manufacturers where we’ve been getting prices — they say all the way down to 30 feet and up to 100 feet with the same lift is not a problem. Ideally we don’t want to be hauling the smaller boats with the larger lift, so we are looking at a second lift to do smaller boats, and increase our efficiency at the yard.” 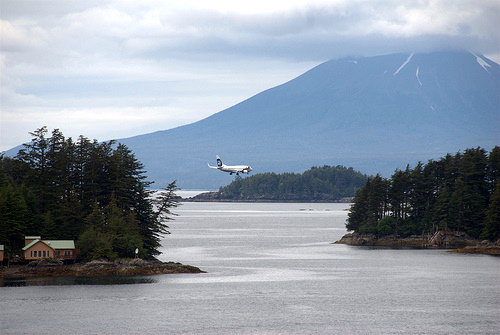 The Sitka Industrial Marine Shipyard is entering a crowded field in Southeast. One major competitive advantage for Sitka, according to Dan Cooper: Regular air service to Seattle for parts and supplies. (Flickr photo/Jonathan Caves)

The size and capacity of the haul out has been an ongoing source of contention, since the project was first discussed before the board last fall. Speaking from the public, Mike Nurco suggested that SIMS was off-track in a big way.

“A 300-ton lift is a great thing,” said Nurco, “but it’s not the lift to start the Sitka boatyard with. It’s too big. I don’t care what anybody says. You’re not going to haul a 30-foot boat easily at all with a 300-ton lift. Anybody in the business knows it. The pictures I saw up there, the straps were anemic for a 300-ton lift — you going to change the straps every time you haul a 30-footer? It’s not practical. Yes, we do need a 300-ton lift eventually, but you will haul far more boats in Sitka with a 150 (ton lift).”

Nurco also objected to the negotiated financial arrangements, which include the city’s backing a $375,000 loan for SIMS, and offering a three-year “ramp up” of zero lease payments.

Nurco thought the deal had strayed far from what Sitka was looking for when it issued the Request for Proposals, or RFP.

“I could be wrong but it seems my interpretation of the RFP was that the entity that came forward with a proposal for the RFP was supposed to finance on their own,” Nurco said. “They were supposed to bring their financing to bear on the whole project. And now it just seems like the whole dynamic is completely different, as far as the city doing a lot of the funding.”

Nurco was seconded by marine tradesman Jeremy Serka, who has also been carefully following the issue from the public.

“You know Warren and Cooper are skilled guys, but they’re not in this business,” Serka said. “This is a new business for them. You guys are throwing all your eggs in their basket, and what are they offering the city for this? Nothing! I haven’t seen any money. They’re hoping to get a loan. This is my livelihood, this is every fisherman’s livelihood, and we’re all throwing in their basket.”

The finances for the entire project look much different, should the city receive a grant from the US Department of Transportation’s BUILD program. There’s an application of $8.2 million pending which — in the event it is awarded — would fund the basic infrastructure costs for the haul out and washdown pad, and eliminate the “ramp up” lease scheme.

The park’s executive director, Garry White, felt pretty good about Sitka’s chances for the grant — but he would feel better altogether about the project if the money were already in hand.

“The best thing we could have done is built a time machine and gone back and applied for the grant in the past, and already known if we have it,” said White. “And then walk into this process — but that didn’t happen. So we are where we are.”

Park board members supported the plan by SIMS, despite objections from the other proposer, Baker Hensley, who complained that SIMS had cherry-picked the best ideas from his proposal, in modifying their own.

Board member Sheila Finkenbinder was ready to send it to the assembly for the finishing touches.

“Personally, I feel that the proposal that was brought forward by WC was quite a bit more detailed and comprehensive than the Baker (Hensley) proposal,” said Finkenbinder, “and I feel pretty comfortable going ahead with it even though things have changed.”

Assembly member Thor Christianson is liaison to the park board. He tried to assure those present that the financial terms were not over-generous, and were intended to promote business growth.

“The city as a leasing entity has a different goal in mind, than if I owned it personally,” Christianson said. “Our goal is to not just get every last penny out of it, but to have businesses going there and give them the best chance to survive. And I think if the other proposal had been the one you’d approved, we’d be talking about the same thing, just because we want them to survive.”