Three of four of Sealaksa’s board-endorsed candidates running with support of the Native corporation’s management were elected on June 27, 2020. (Screenshot by Jacob Resneck/CoastAlaska)

Another effort to institute term limits for Sealaska’s 13-member board of directors has failed despite receiving a majority of ‘yes’ votes from shareholders.

Similar term-limit measures also failed to advance in 2016 and 2012.

This year’s measure faced a steep hill to climb. It needed more than 1 million shares directed by shareholders to succeed. But it still fell short with nearly 820,000 shares in favor compared to less than 520,000 against. And more than 600,000 shares weren’t counted either way. 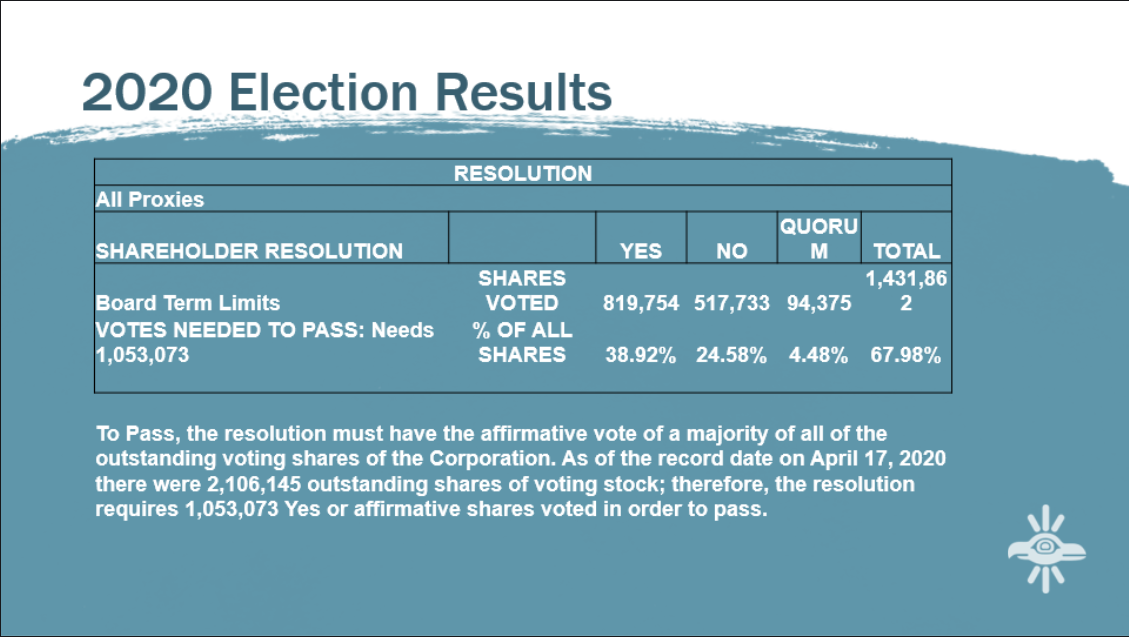 Shareholders hold various amounts of shares. The more shares they own the more weight their vote carries.

In the race for Sealaska’s board of directors, three of the four seats up for election went to board-endorsed candidates running on a joint platform. They were newcomers Lisa Lang of Hydaburg and Angela Michaud of Anchorage.

Morgan Howard of Kirkland, Washington was re-elected for a second term.

“Our path forward looks promising as we continue to protect our land, preserve our heritage, revitalize our languages, increase shareholder opportunities and improve communication to shareholders,” Howard said in a statement.

Independent candidate Karen Taug filled the fourth open seat. The Juneau resident touted her experience working in finance as an asset. Following her election, Taug told CoastAlaska she’d like to see the regional Native corporation partner with urban and village corporations, as well as tribal governments, to create job opportunities across Southeast Alaska.

“Because I believe that if we have a good economy, then we can help provide jobs for shareholders so that they can provide for their own families. I think that’s a bigger benefit than a once- or twice-a-year dividend,” she said in a phone interview. “The dividends are nice, don’t get me wrong. I think dividends are important. But I believe having a job is more important, because then you can provide year-round.”

Because shares, rather than shareholders, are counted as votes it’s nearly impossible to say which candidates received more support from individual shareholders.

The average shareholder has 400 votes.

Sealaska is based in Juneau and has more than 22,000 shareholders making it the largest of Alaska’s dozen regional native corporations. It reported more than $700 million in revenue last year.

According to a 2020 filing, Downes was the highest paid employee, making around $2.1 million in 2019; Mallott and Morris reported compensation totaling $1.14 million and $1.17 million respectively.

The longest serving member is former state Sen. Albert Kookesh of Angoon, who’s been on Sealaska’s Board of Directors since 1976.

Editors’ Note: This article has been corrected to reflect that Lisa Lang lives in Hydaburg, not Juneau.