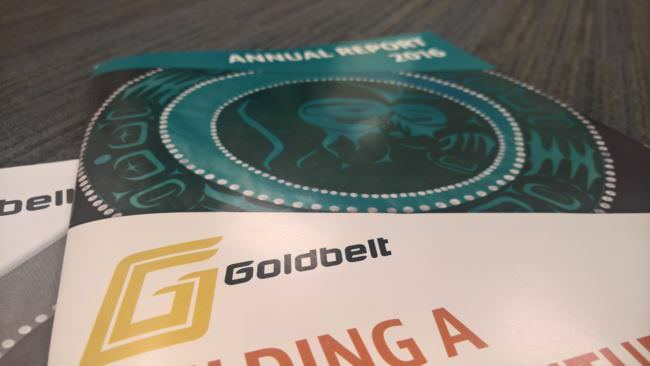 State financial regulators have fined a Goldbelt, Inc. shareholder over a Facebook post complaining of inaction by the state agency responsible for financial oversight of the corporate board. This comes as the state’s broad powers over shareholder speech is under review by the Alaska Supreme Court.

Goldbelt shareholder Ray Austin complained to regulators in 2018 that board members were breaking the rules by not filing financial disclosures.

“It’s important that board members disclose any conflict of interest that they may have,” he said in a recent phone interview from his home in New Mexico.

But he says that the Alaska Division of Banking & Securities, which has oversight of the board of Juneau’s urban Native corporation, did nothing.

Then, in a Facebook forum in May of 2019, while running for a seat on the board he went public with that and another complaint he’d filed:  Goldbelt board member Richard Beasley, an accomplished Tlingit master carver, had signed a contract for work at the corporation’s Mount Roberts Tramway a month before the corporation’s annual meeting and board elections. But this wasn’t disclosed to shareholders. 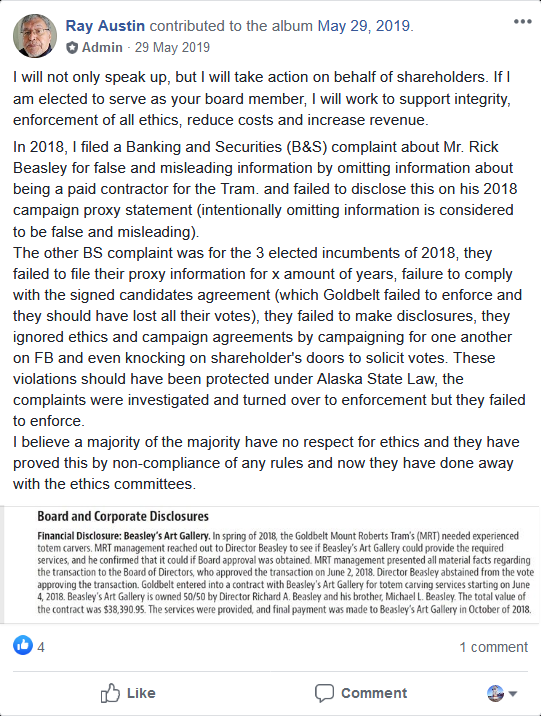 Alaska’s Banking & Securities Division says “Facebook posts are ‘proxy statements’ as defined in 3 AAC 08.365(14) because they are communications that were made available to shareholders under circumstances reasonably calculated to result in the procurement, withholding or revocation of a proxy. In other words, they could help sway a shareholder with voting power in a Native corporation election. (Screenshot by Jacob Resneck/CoastAlaska)

Normally board members aren’t allowed to work for corporations they’re overseeing. But the board had made an exception for one of their own. Austin’s post also revealed the details of past complaints, none of which he believes were acted upon by regulators.

But it’s that public, online complaint that’s landed Austin in hot water. State financial regulators are empowered to regulate any public statement that could sway a board election in a Native corporation — which his post seeking support from shareholders arguably was.

The rules are designed to block misleading information that could affect projects and defraud investors. But critics like Austin say it’s more often used to silence dissent of shareholders of regional, urban and village Native corporations.

“Freedom of speech is important. I think, shareholders or anyone should have the right for freedom of speech,” Austin said, “and it appears that we don’t.”

Regulators charged with enforcement say that’s not the case.

“Every complaint is treated equally,” said Leif Haugen, chief of enforcement for the state’s Banking & Securities Division.  He wouldn’t comment on allegations against Goldbelt’s board of directors, as investigative files are confidential.

Most, though not necessarily all, enforcement actions are generated by complaints brought to the seven-member enforcement team. He says most orders and fines are against individual shareholders probably because they often don’t have the same access to professional legal advice.

“We see more complaints against shareholders maybe because they aren’t quite as knowledgeable about the regulations.”

Goldbelt’s CEO McHugh Pierre says the corporation didn’t try to silence Austin, a perennial candidate for the board and outspoken critic of the corporation’s management. And he denies that  board members band together to campaign for each other.

“We don’t have a board slate like Sealaska or other corporations do,” he told CoastAlaska News. “It’s a totally independent campaign cycle. And so the corporation doesn’t take a position one way or another and doesn’t take actions against candidates regarding Banking & Securities investigations.”

So why did regulators issue a June 16 enforcement action against Ray Austin?

“So, (Austin) was saying that it should have been disclosed in the 2018 proxy,” Pierre explained, “which, that was impossible because the work wasn’t for the previous year. The work was beginning in 2018. And in fact, began after the proxy was already printed (in April).”

And it’s on this basis that regulators say a “material misrepresentation” was made, and fined him $1,000.

There are differing views on whether Goldbelt should’ve disclosed one of its board incumbents had a paid, side-gig with the corporation. But to date, regulators are silent on that point.

“I won’t speak about other matters that have been under investigation that didn’t result in an order or anything that may be currently being investigated,” Haugen told CoastAlaska.

But back to the larger question: Are regulators overreaching by fining dissident shareholders? The Alaska Supreme Court has already heard arguments from the ACLU, challenging the state’s power to regulate any speech in print or online that could influence the governance of Native corporations.

Haugen says the courts have traditionally sided with the regulator. In fact, its broad powers aren’t limited to just shareholders of Native corporations created out of the Alaska Native Claims Settlement Act or ANCSA.

“Any person, theoretically, who gets involved in soliciting proxies could become a respondent in an ANCSA complaint,” Haugen said. “I can tell you that I haven’t seen that in my time here. But I guess it’s theoretically possible.”

That remains untested. Even so, the state’s authority over Native corporation elections violates free speech is a question now being weighed by Alaska’s Supreme Court justices.

Austin has the right to defend himself in an administrative hearing. But to do that, he’ll need to have forms notarized — in person — and he says that’s too risky in a pandemic. He lives in New Mexico, where as of early July 2, more than 500 people have died from COVID-19; there have been more than 12,000 confirmed cases in the state.

“We’re close to the Navajo reservation and my wife’s Navajo and we know people that have the virus right now,” Austin said. “My brother-in-law’s brother died from it and so I just didn’t want to jeopardize myself and my family.”

He’s now in touch with state regulators on the potential workarounds so he can defend himself in a hearing without coming into contact with people outside his household.