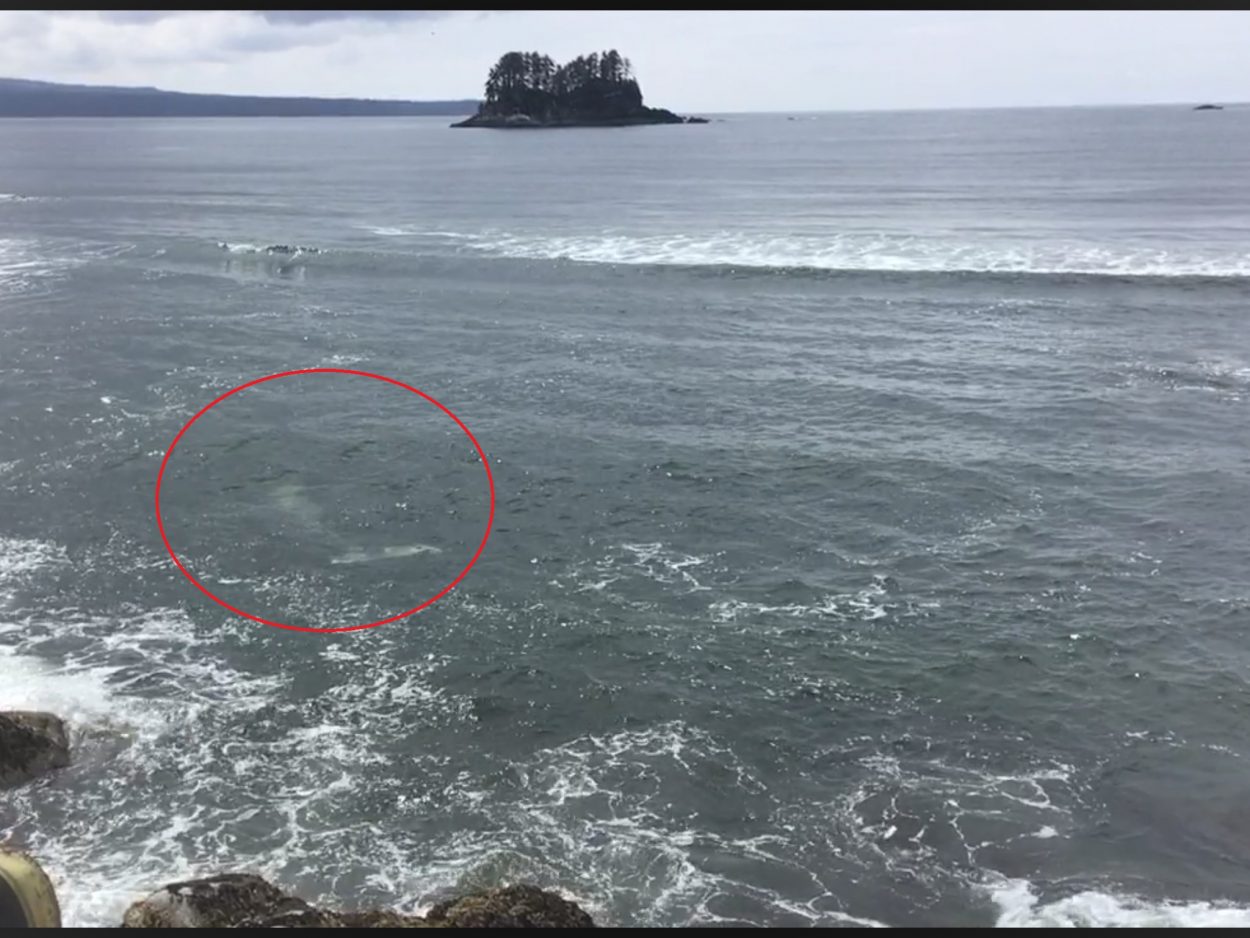 Despite their proximity to the trapped whales, Edwards, Putz, and Mason didn’t score a fantastic pic. “Unfortunately most of our photos and videos are more like the Loch Ness monster,” said Edwards, “where you can tell there’s something there.” In the red circle, however, a whale tail is clearly visible. (Leah Mason image)

Gray whale strandings are on the rise, on the west coast and in Alaska. Biologists don’t fully understand what causes the huge animals to become caught upriver, or on a beach — which makes the collection of tissue samples and other data from the dead whales critically important. Near Sitka recently, three campers had an unprecedented opportunity to aid the cause of science when they discovered a stranded gray whale and her calf. But the animals — who were both quite alive — were no help at all.

Perry Edwards, Michelle Putz, and Leah Mason are sheltering on my front porch from a light summer rain. They’re just back from a long June weekend on Kruzof Island, Sitka’s wild and remote next-door neighbor to the west.

Kruzof is famous for its black sand beaches, open to the Pacific swells and surf. The three were staying at the North Beach Cabin. Edwards woke up early to go beachcombing.

Edwards – And it was a super-low tide. The beach just went on forever. I looked over at that rock wall on the south end, and I saw something blow. And I thought, ‘Maybe that’s just the splashing of a wave, there’s not enough water for anything to be there.’ And then I looked again and I saw a pectoral fin flip over. And I ran back to the cabin and said, ‘Hey, Michelle and Leah, there’s a whale that’s stranded and there’s no way it can get out.’ 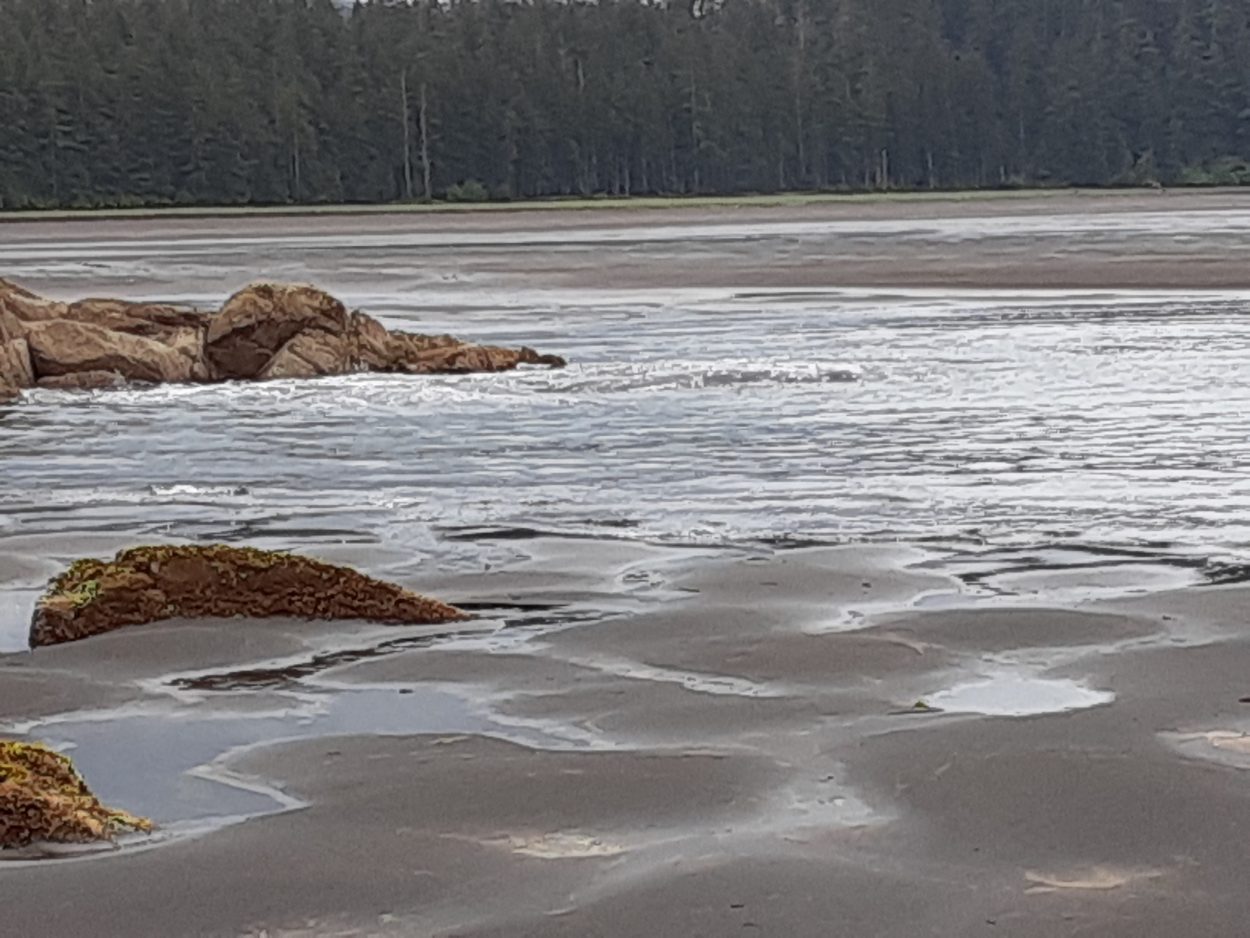 This is the scene Perry Edwards encountered early in the morning on North Beach, Kruzof Island, during an extreme low tide. The gray whale cow and calf are churning the water in the tidepool adjacent to the rocky point. (Perry Edwards photo)

A whale this close to a beach — not to mention stuck on it —  is not uncommon. Not for gray whales, anyway. They’re benthic feeders, who dredge the ocean bottom for food.

“It’s not unusual to see gray whales in the area, foraging or swimming near shore,” said Mandy Keogh, the Alaska Stranding Coordinator for the National Oceanic and Atmospheric Administration — or NOAA. She adds, “So they will go down and disturb the sedimentation, to get arthropods and other organisms like that. It’s not uncommon to see them near shore in shallow waters.”

Keogh says this whale was not stranded by definition, but “alive, onshore, and unable to return to the water.” But try telling that to the whale — or in this case, whales. Because there were two, a mother and calf.

Mason – These whales were in such a small space that it looked like eels in a  bucket, roiling in there.

Putz – You could see their backs and most of their bodies sticking above water for much of the time. There was a female, we think, and a calf — the calf being three-quarters the size of the female. And the female was trying constantly to find different ways to get out. She would be pushing her way out swimming around and at times she’d get stuck on one of the sandbars and have to inch her way off of it so that she could get into slightly deeper water.

The tidepool was about five feet deep — just enough water to support the whales and prevent them from being crushed by their own weight (which would constitute a legitimate stranding). But the very low tide appeared to be at its lowest. Edwards and Putz both work for the US Forest Service, where Edwards is a biologist and district ranger. He radioed the Sitka Forest Service dispatcher to report the situation to NOAA.

That was really all they could do — or even bear.

Mason – We know in our hearts that they have gone through the worst and  they’re really active, so that’s a good sign. And if we sit here and watch we’re going to give ourselves ulcers.

Putz – And if they need anything, there’s very little we can do. Maybe we have a bucket or two off the boat and some blankets, and this is going to be ugly if we have to do anything.

Mason – Amazing for how close they came. I’ve got great shots of nostrils, within three or four feet of the rocks where we were standing.

Mandy Keogh is grateful that the three did not try to intervene. “You’re looking at a 40-50 foot whale, and if it’s stranded and in distress, you can easily become injured, just by its trying to reposition itself or move,”she said.

Keogh says the best thing anyone can do during a marine mammal stranding is to take pictures, and report the event to NOAA. If a pathologist can get to the animal soon after it dies, and collect and preserve tissue samples, researchers might be able to unravel why the animal went ashore — whether due to disease or malnutrition, or other cause. Last year in Alaska, forty gray whales beached and died, and this year we’re already ahead of that alarming pace. Biologists refer to it as an “unusual mortality event.”

A couple of hours later, our trio returned to see how the mom and calf were faring — and perhaps to offer some inter-species support.

Mason – The larger animal was just ceaseless. Just circling, and having a go at the sandbar, and coming back.

Putz – We saw her surfing in the waves a few times. You’d see her going along sideways, and suddenly you’d see a whale, in the wave — you could see her shadow in the wave sideways. It was quite beautiful, and sad.

KCAW – You’d love to be able to tell them to just be patient, the tide’s coming in.

Edwards – Right. We were 12-15 feet away on the rocks, and Jan Straley felt very strongly that absolutely they could hear us, because we were cheering them on, talking to each other. She was very confident that they could hear that we were right there.

Jan Straley is a whale biologist in Sitka, and a member of the Alaska Marine Mammal Stranding Network — which kicked into action after Edwards’ radio call. Plans were already underway to perform a necropsy on these whales. But, nature did not cooperate. The Stranding Network would have to settle for an interview after-the-fact.

Edwards – The cow made yet another run which we didn’t think was going to get anywhere, and she went through. And as soon as she did, that second whale just shot right out behind her and we watched them go off into deeper water, and we cheered them on, and it was also at the same time that the Coast Guard was flying over because unbeknownst to us there were a whole bunch of things that were put into play with NOAA and the Coast Guard, and Jan Straley here in town, trying to figure out what’s going on with this whole thing.

So, science was thwarted and the whales got away. But Edwards, Putz, and Mason got the story of a lifetime, and some fantastic pictures, right? As it happens, gray whales in the surf aren’t all that photogenic.

Edwards – …so there were flippers and stuff. Unfortunately most of our photos and videos are more like the Loch Ness monster, where you can tell there’s something there…