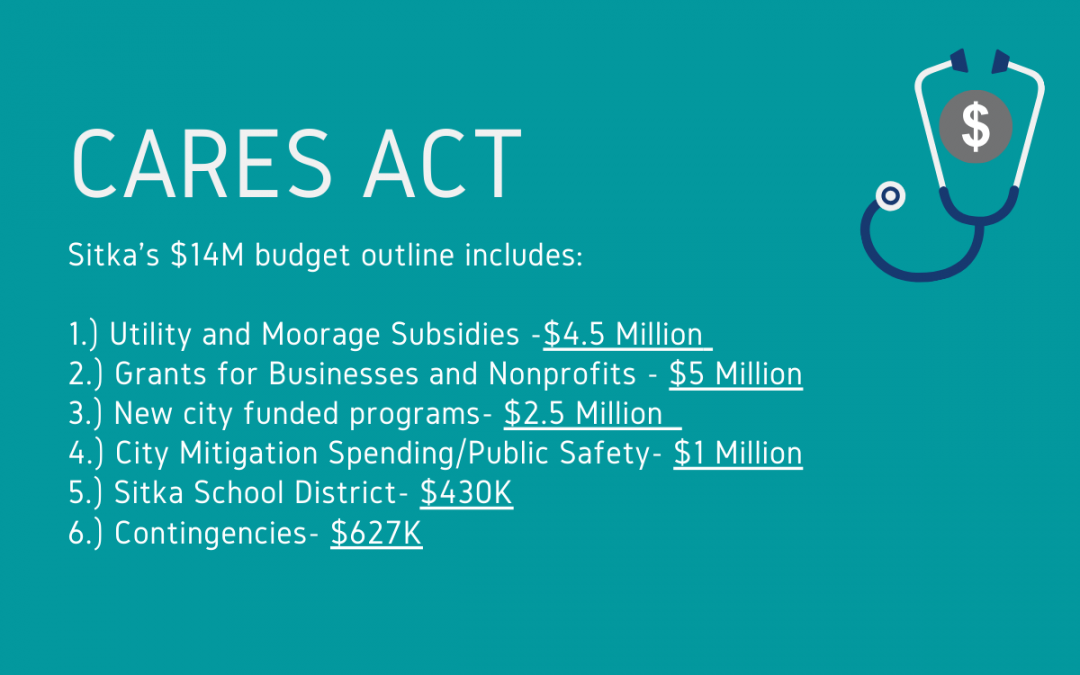 The adjusted breakdown of Sitka’s CARES Act budget, approved by the assembly on July 7, directs funding to six categories. Each category will now come before the assembly for two more readings (KCAW Graphic)

In a split vote Tuesday (7-7-20), the Sitka Assembly passed a budget that broadly allocates over 14 million dollars in federal economic relief. But the fireworks over the CARES Act funding may just be getting started, as officials try to determine who gets money, and how much.

The assembly has already approved over $4 Million toward utility and moorage assistance. The remaining $9 and a half million in federal coronavirus relief money will be divided up like this: $5 million will go to grants for local businesses and nonprofits. $2.5 million will go toward new city-funded programs, $430,000 for Sitka schools, and $1 million toward city mitigation costs, like remote work laptops and equipment, and converting city bathrooms and water fountains to be “hands free.”

Review the budget broken down by category here

“A business can claim that they’re not able to capture the scope of their services accurately through the application, so they would like to come forward to the assembly in public session and request awarding at a higher level,” Leach said.

The childcare money could go toward subsidies for childcare facilities, but could also be used to build capacity in Sitka, which had a shortage of available childcare before the pandemic. During public comment, Margaret Hart said the capacity building was what she was most hopeful for.

“I hope that they will keep in mind the vast potential of in-home daycares, especially in our state which allows small capacity home care without requiring licensure,” she said. “Incentivizing in-home daycare could go a very long way to help curb our childcare crisis.”

The assembly struggled to reach consensus, as members built the $14 million budget. Member Richard Wein said he wasn’t happy with parts of it.

“I feel like I am something out of an Ian Fleming novel entitled ‘Dr. No,'” he said. “I’m going to vote no on this, not because I disagree on the whole thing but because, philosophically, there are certain things that I feel just have not been adequately thought about.”

Member Kevin Knox, who is on the working group that drafted the budget over the last month, asked what it would take to get him to vote “yes.” Wein said increasing the “food security” funding to at least $1 million. He also wanted more information about the transitional employment program, and further exploration of the possibility to support Sitka’s unhoused population with CARES funds.

Member Kevin Mosher, who is also in the working group, urged a yes vote on the budget as is to keep the process moving forward.

“Yes, it’s not perfect. Yes we don’t have all of the details, but we’re making a plan based on loose assumptions,” he said. “This is the best we can do with the limited time we have and limited resources to gather this information.”

Mayor Gary Paxton worried that if the budget didn’t pass it would slow things down too much. CARES Act funds must be spent before the end of this year.

“I am really concerned that if we screw around too long we’re going to lessen the ability for us to get applications in and dispense money,” Paxton said.

After more deliberation, and when it looked like the vote would split, Wein changed his mind. Valorie Nelson, however, did not.

“I appreciate all the hard work by the subcommittee and the working group, but I’m just not ready to be a yes on this,” she said.

The budget passed 4-1 with member Valorie Nelson opposed. It’s still not set in stone. Each budget category will come before the assembly as an individual ordinance when the group meets again on July 14.