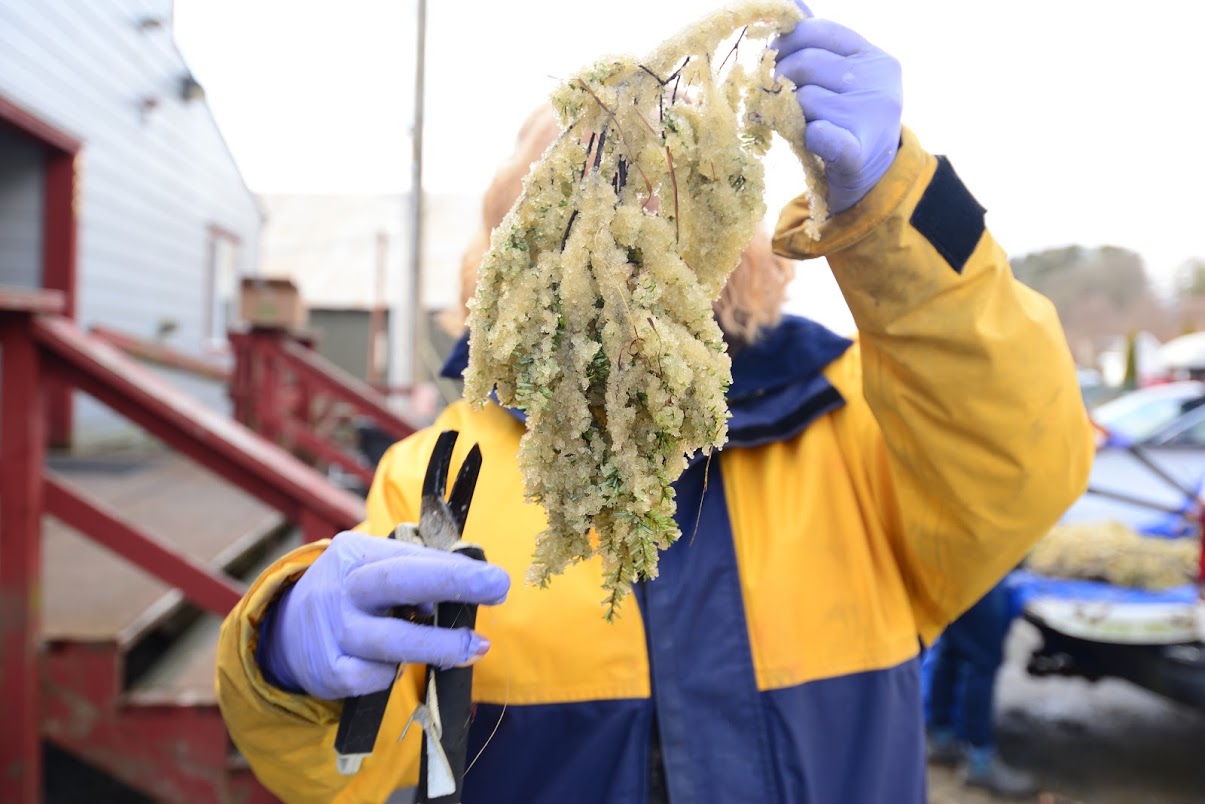 Pulled out of the ocean by Sitka Tribe’s Resource Protection staff, herring eggs are bagged and delivered to elders and tribal citizens by drive-through pick-up. Sitka, Alaska. April 9, 2020. (KCAW/Berett Wilber)

After two seasons without a commercial fishery, herring stocks in Sitka Sound are on the rebound, according to state scientists tracking the data. But subsistence users are skeptical: What herring there are in the Sound seem to be both thinly distributed and moving farther out of reach, suggesting that stocks remain stressed. In Part One of a two-part series on Sitka’s herring problem, KCAW’s Katherine Rose reports on where the data and traditional knowledge diverge.

Sitka’s commercial herring fishery never opened this past spring, and several factors contributed. In an industry where size matters, the fish were too young and too small for seafood markets in Asia. By early March, most processors had decided that a fishery wouldn’t pencil out. Then, the global coronavirus pandemic disrupted markets completely, ending any possibility that there would be a harvest.

She says that surveys in 2019 suggested large increases in the number of eggs and fish. That year, just over three-quarters of the fish in Sitka were three-year-olds — still too small to attract seafood buyers, but a good indicator that subsequent years would be better. Dressel says 2020 brought some improvement in the stock — just not enough.

“Our forecast biomass was primarily age four fish. And the average weight of the population was about 97 grams,” says Dressel. “This year, market-wise, I think that they were looking for an average of about 110 [grams]. It was just pretty unlikely they would have gotten it, that’s why they chose to stand down this year.”

Pacific herring mature early, and spawn every year into their mid-teens. Although stocks are on the young side, Dressel says communities around Sitka saw dense spawns in 2020: Craig, for example, had record spawn this year, and Sitka’s miles of spawn were higher than average.

“The spawn on Kruzof was one of the overall highest densities that the divers have ever seen,” says Dressel.

Even so, she says it’s important to be conservative. Although the Sitka herring fishery was non-existent the last two seasons, the 2018 season was a near-disaster, with fishermen falling far short of the state’s guideline harvest level.

“I think the last couple of years have helped the herring specifically, but it would probably take another maybe eight years or more of the same before we could even say that we’re safely getting close to where we should allow any type of [commercial] harvesting again,” says Tom Gamble, a subsistence harvester and former Tribal Councilmember.

He’s one of many critics of the state’s management of the fishery who has been calling for the state to change its management model for years. He believes that the state’s failure to do so has had ripple effects throughout the ecosystem. Where the state saw spawn this year, he often saw spawn too, but it wasn’t always in large volume, and the absence of large amounts of predators near Sitka was concerning.

“Where we used to hear those gulls crying from Seamart,” he says, “You couldn’t tell that herring had ever come in or out of the sound from the Sitka shore.”

Dressel agrees that, though they did record a little spawn near Sitka at the end of the 2020 cycle, the absence of spawn near town over the last few seasons, typically full of spawning hot spots, is very unusual.

And rather than blanketing the inner islands and shoreline of Sitka with spawn, fish have been moving to more remote areas, even showing up on the outside of Kruzof Island for the first time in over 20 years.

While some subsistence harvesters did well this year, Gamble says that the unusual spawn patterns makes things far more challenging than in the past.

“Eighteen miles on a Kruzof shoreline away for most of our harvesters in Sitka Tribe or subsistence gatherers in general from Sitka in general don’t have the means to travel [that far] by boat that small,” says Gamble.

And just as the pandemic played a role in halting the commercial fishery, Gamble says the coronavirus affected the day to day operations of subsistence harvesters. Some businesses were closed, so getting gear and gas was challenging. Businesses that were open weren’t taking cash — a significant hurdle for small cash-only businesses like Gamble’s. And travel was grinding to a halt, making it harder to distribute boxes of eggs.

“Honestly it was a pretty frantic time as I recall,” Gamble says. “Airplanes were shutting down…typically our family would be coming and going, taking their boxes with them, so outreach and everything else changed quite a bit.”

Even with poor market conditions and coronavirus concerns, some commercial fisheries in Alaska still happened. In Togiak, the biggest purse-seine fishery in Alaska, only one processor bought fish, even though the quota was huge, set at around 80 Million pounds, many fishermen didn’t participate due to poor market conditions.

Icicle Seafoods set up a floating processor, in an attempt to reduce community exposure to the coronavirus. Even though they were able to make the fishery happen, we don’t know much about the catch in Togiak. In mid-June, ADF&G announced it would keep data from May’s fishery confidential due to low participation.

As much as the state knows about herring stocks, the forecast for 2021 involves many factors — any combination of which could lead people to different conclusions about Sitka’s herring. But biologist Sherri Dressel is genuinely optimistic about the future health of the population.

“If you put all of the details aside- whether we’ve got a commercial harvest, where the spawn is, how that works for subsistence, all of those are really important concerns. And how you tease that out, different people will come to different conclusions on what this has meant,” she says. “From somebody who works with the population, the fact that we’ve got a humongous year class throughout the gulf can only be good.”

Tom Gamble, for his part, says his goal has never been to shut down the commercial fishery. Like the Sitka Tribe of Alaska, which is actively litigating the issue in court, he wants it to be managed sustainably so the fish one day thrive again.

“Sitka Tribe and the state, while they try to decide who’s right or who’s wrong, the herring don’t have a voice,” he says.

But if they did, they might ask if there will be a home for them in Sitka Sound in the future.