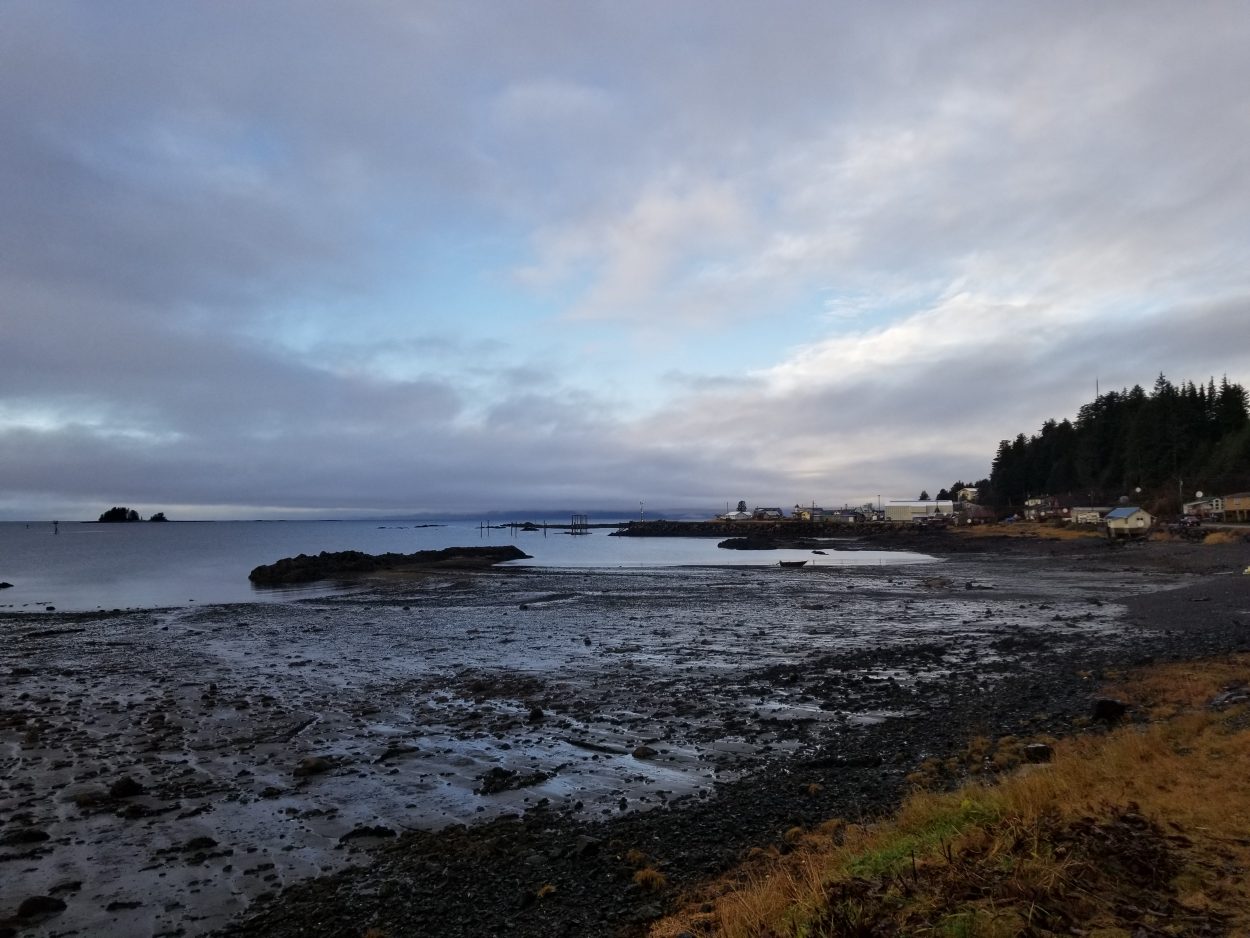 A beach in Kake in December 2019. The Kupreanof Island community of around 500 people has implemented several natural resource management projects, including a new ocean monitoring program. (Elizabeth Figus/University of Alaska Fairbanks)

The southeast Alaska community of Kake is taking advantage of an unusual opportunity this summer. When the coronavirus pandemic halted nearby cruise ship traffic, local officials and university researchers clambered to start monitoring nearby waters. They want to see how the cruise ship industry and climate change may be affecting subsistence food sources.

It’s a grey day in Kake, a perfect day for fishing, says 22-year-old Shawaan Jackson-Gamble. He’s taken his subsistence week off work and has just come off the water from trolling for the Zoom call.

He starts by introducing himself in Tlingit. “My Tlingit name is Ch’aak’ti. I belong to the Tsaagweidi people,” he says.

Jackson-Gamble is a college student at Northwest Indian College studying Native environmental science, and he has around five years of field experience. He’s part of a team of local residents and high school students trained to monitor nearby waters this summer. They collect water samples twice a week and send them off to a university researcher to be tested for things like heavy metals, fecal coliform and nitrogen. They’re also collecting mussels for testing and monitoring for impacts of climate change.

“And they’re all Kake guys. I think that’s really cool about what this is,” he says. “It’s getting our people into this stuff, and, you know, it’s important work.”

Jackson-Gamble says he enjoys observing his environment. It’s what drew him to science. He also sees the importance of this work. Traditional foods are a huge part of his and his community’s diets. He hunts, fishes and collects seaweed and shellfish. Threats to those food sources could greatly impact the food security of Kake.

“We don’t always have to depend on the store because our store is our lands and our waters,” Jackson-Gamble says. “It always provides for us when we need it.”

That’s a big reason why the Organized Village of Kake wanted to start their own data monitoring efforts, even before the lull in marine traffic. Cruise ships normally pass the Kupreanof Island village via Frederick Sound and southern Chatham Strait.

“And they go right down the middle of Frederick Sound, which is of course right out in front of our village,” says Joel Jackson, the president of the federally-recognized Tribe. “They are able to dump their grey water–they call it–out there. And our people go out and gather seaweed and other things from the tide lands.”

In Alaska, cruise ships aren’t legally allowed to discharge untreated sewage or grey water. But, he says, they want to see if there are any adverse effects of what they are dumping.

And they’re not alone. State and federally-sponsored projects are also taking advantage of the opportunity to collect baseline water quality data in other parts of Alaska this summer.

“When people see a difference on the shore or in the fish or in the halibut or any of the fish that’s caught out in Frederick Sound or Chatham, we want to back up all these speculations and hearsay,” says Dawn Jackson. She’s the executive director for the Organized Village of Kake. She says the Tribe had been wanting to take on this kind of data collection for a while, but they didn’t have access to a trained scientist or funding.

“I think it’s really important because we live right in the heart of the Tongass National Forest. And gathering all this data is important to us in a Western sense,” she says. “We already have traditional knowledge here. It’s just marrying the two.”

So, when University of Alaska Fairbanks researcher Elizabeth Figus approached the Tribe and other local entities last winter to see if they wanted to partner on climate change and environmental research projects, they said yes.

This ocean monitoring project is part of a broader two-year effort to co-produce research with the Organized Village of Kake, the City of Kake and the Kake Tribal Corporation. Funding comes from a patchwork of places, including a USDA grant, university funds and in-kind staff donations from the Tribe and other entities.

“Co-production or co-producing research is our jargon for basically organizing research through partnerships rather than as a one-sided agreement where a researcher comes in with a goal and requests permission to extract information from a community,” Figus says.

Figus hopes that by hiring locally and working closely with local entities, people in Kake can continue carrying this work in the future.

“Our hope is that we’re designing a high-quality project…for people in Kake to carry out their own research and then become the archival holders of this data for future work to come,” she she says.

Ocean monitor Shawaan Jackson-Gamble hopes to continue that work too. This is one of several environmental research projects the community has partnered on. He also works with the Keex’ Kwaan Community Forest Partnership, an Indigenous land management project in Kake that works to enhance traditional and subsistence food security, develop a natural resource workforce, and invest in tribal sovereignty.

“I think that’s what it’s going to have to come to is incorporating more traditional knowledge to protect our resources. Like what we’re doing now, is to look at what if our traditional foods are being altered. Because they don’t really have a voice to how they’re feeling,” Jackson-Gamble says. “We just have to protect them like we always have.”

He says the seaweed has been particularly thick this year. He’s curious to learn more about why that is.

Erin McKinstry is a Report for America Corps Member.

Editor’s note: This post has been updated to add information about legal regulations and grey water dumping.