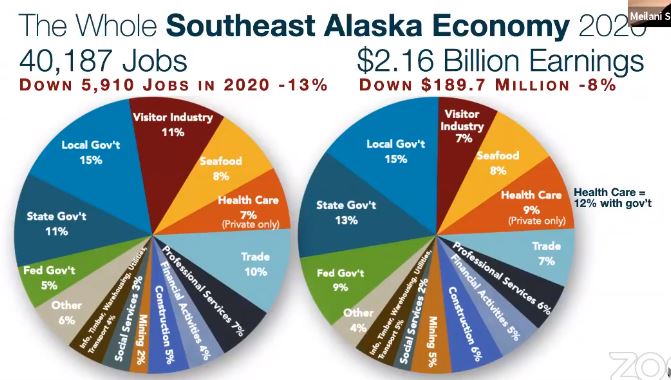 2020 will always be remembered as a pandemic year — but in Southeast Alaska, it also will be noted as the year that Health Care became the largest private sector wage provider in the region.

Melani  Schijvens is the director of Rain Coast Data, and the former director of the Southeast Conference. She prepares an annual report called “Southeast By The Numbers.”

Schijvens delivered the report to the Sitka Chamber of Commerce on Wednesday (10-6-21), and while much of the information — such as job loss in the visitor industry — was expected, this came as something of a surprise.

Health care climbed past the seafood industry and tourism in 2020, but it wasn’t just the fact that those sectors had poor years. Schjivens says that the health care sector has been on a growth trend that has created a demand for workers, and increased the wages being paid to them.

“Even before the pandemic we didn’t have enough health care workers nationally,” said Schijvens. “And so what you see in Southeast Alaska and Alaska and other places in the US is this increase in in wages as we’re trying to attract and retain healthcare workers when there’s a lot of competition for a too small of a resource and so without wages go up in 2020. What we’re going to see with the pandemic, as we have healthcare worker burnout across the nation is even a smaller resource that we’re all going to be fighting for. So I expect to see wages to continue to go up in the healthcare sector.”

“So in Juneau, we are building a $14 million dollar behavioral health building in Sitka, you just voted yesterday to, to make it a sale to SEARHC which is going to result in a $38 million, 25-bed critical care services building. In Wrangell SEARHC has recently built a new $30 million critical access hospital. And in Petersburg, they are assessing building a new $80 million hospital,” said Schijvens. “So we’re seeing real investments into healthcare infrastructure across the region, which is really important and valuable.”

Schijvens said that Southeast Alaska has had different private-sector leaders over the years, with timber at the top of the list in the 1990s, seafood in the 2000s, and tourism after that. But throughout the decades, all these private sector industries have lagged behind local, state, and federal government — which remain the top employers in the region.