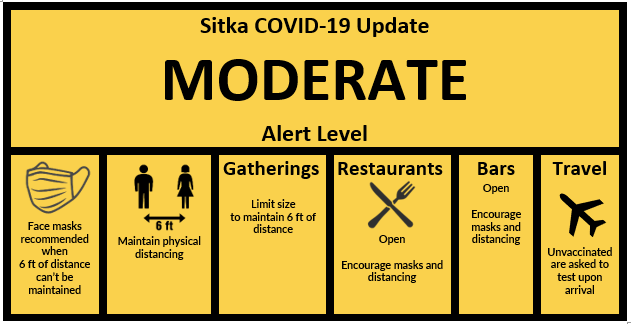 With only 4 cases in the last seven days, Sitka is now one of only two communities in Alaska to have dropped into “moderate” alert for COVID — the second-lowest alert tier under the color-coded system adopted statewide in September. The other community in the “moderate” level  is Dutch Harbor, Unalaska, in the Aleutian chain.

The rest of the state, with 583 new cases reported on Thursday, remains at “high.”

Sitka had been in “high” alert since late July. The alert level was reduced to “substantial” on November 8, and remained there for only four days until dropping to “moderate.” To remain at “moderate” Sitka must report four or fewer infections in seven days.

According to the state health department dashboard, Sitka is also among the most-vaccinated communities, with 75-percent of residents — including residents age 5 and up — having been fully vaccinated.