Haida Energy is starting to build Prince of Wales Island’s next hydropower plant. But it still needs more funding.

The Reynolds Creek hydroproject has long been a dream of the Haida village Native corporation, based in Hydaburg. 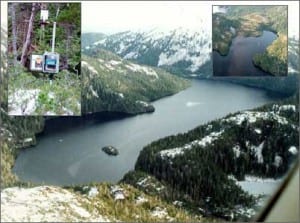 “We are on the ground. Durrett Construction is moving in with their barge. We awarded early in September. And we’ve got 9 to 11 weeks of work, so hopefully the weather will cooperate and we’ll get this first phase of work done,” he says.

Reynolds Creek is about 10 miles from Hydaburg, which is about 25 miles southeast of Craig. It’s being developed by Haida Energy, a joint venture of the Haida Corporation, and APT, the Alaska Power and Telephone Company.

Its powerhouse and small dam will feed electricity into Prince of Wales Island’s grid, eliminating the use of high-cost diesel generators.

Hildenbrand, speaking at the Rural Alaska Energy Conference in Juneau, says there’s a long list of projects for this fall.

“Repairing the roads, building a road into the powerhouse site, building a road into the dam site so we can do our geotech investigations confirming what we have for foundation conditions. APT is also starting construction of the transmission line from Hydaburg out toward Deer Bay. The turbine generation is very close to being on order. And then we’ll be moving into final design based on our geotech work this fall,” he says.

The project’s power is expected to cost 11 or 12 cents a kilowatt-hour.

Its overall cost is estimated at $28 million, paid for by a mix of grants, loans and backing from its developers.

Alvin Edenshaw of the Haida Corporation says that’s more than they have. 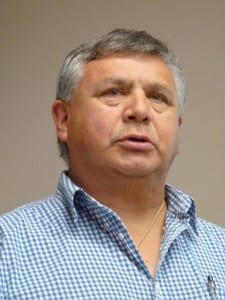 “Along the way, since 2000 and 2006, the cost has gone up. So we’ve gone back to the state and we are in the process right now with the Alaska Energy Authority and AIDA to develop another $9 million loan to bring our project on line,” he says. (Read a letter about Reynolds Creek from Edenshaw to shareholders.)

Haida Energy is also looking for ways to save money.

One approach is to change its Fish and Game Department permit. It requires what’s called a rotating drum fish screen to keep grayling out of the turbine. Hildenbrand says the fish were stocked and are not native to the area.

“So we’re looking to mitigate the cost of that fish screen and the possible operation problems with some outside mitigation funds so they can go ahead and perhaps in Hydaburg enhance some of the fisheries streams that have been damaged over history,” he says.

He says the screen costs about three-quarters of a million dollars.

Developers hope to have the hydroproject complete and producing electricity in 2014.